WHAT ARE WEEKLY OPTIONS?

What are weekly options and how do they differ from other options? In answering this question, a good place to start is by looking at the ‘options’ part of ‘weekly options.’

An option is also frequently referred to as a stock option, or an equity option, and it is important to understand the difference between buying options and buying shares of stocks.

Although stock or equity options are based on shares of stock in certain companies, and rise or fall in value along with their underlying stock, buying options is very different to buying stock. 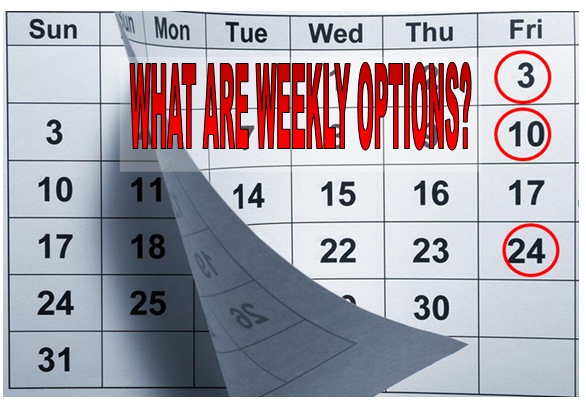 HOW Do OPTIONS WORK?

Buying an option means paying a specified amount, called a premium, to purchase a contract. This contract gives the holder the right to buy an amount of the shares on which the option is based at a pre-determined price, known as the strike price.

The contract may be exercised, which means used to buy the shares at the strike price, during a period of time which ends on a specific date. This date is called the expiration date of the option contract.

The option does not obligate the holder to buy the shares, except if it expires “in the money,” which means that the strike price is better than the market price at that time.

The holder of the contract can also choose to sell the contract within the time prior to expiration, and doing so can result in one of two outcomes.

Selling an option contract can either achieve a profit by garnering a price higher than the premium paid (minus fees), or may be sold at a loss which allows the holder to recoup some of their initial investment, rather than waiting until expiration.

If an option contract expires “out of the money,” meaning that exercising it would mean paying more than market price for the underlying shares, it expires worthless.

Options are frequently ‘traded,’ which means that they are bought and sold as a commodity in their own right, not only as a means of purchasing the underlying shares which their holder is entitled to buy.

WHAT ARE WEEKLY OPTIONS COMPARED TO STOCK OPTIONS?

Standard options have a monthly expiration date, but can be bought many months before they expire.

Weekly options have a weekly expiration date, and may be bought up to six weeks before their expiry date.

WHAT ARE WEEKLY OPTIONS TYPES?

The basic types of weekly options, as with monthly options, are called ‘calls’ and ‘puts.’

WHAT ARE WEEKLY OPTIONS USES?

One of the best uses of weekly options is to profit from a situation that is about to affect the price of a stock. These situations include the company reporting earnings, major changes in structure or the launch of a new product or service. Other events often likely to cause price movement range from economic news to world events.

Another great use of weekly options is for stock traders wishing to hedge their stock position against losses by using options for a short-term strategy.

WHAT ARE WEEKLY OPTIONS EXPIRATION DATES?

WHAT ARE WEEKLY OPTIONS BENEFITS?

Trading options in general has many benefits, a primary one being the increased leverage of controlling an amount of stock at a fraction of the cost of actually buying the shares outright.

Weekly options have a couple of extra benefits compared to monthly options. The first is that they are usually priced lower than their monthly counterparts. This is because time value is a component of options pricing, and weekly options obviously have less time value factored into their premium.

The other primary benefit of weekly options is that they offer many more trading opportunities as a result of their frequent expiry dates.