A Good Example Of “Greed Undoing A Profitable Trade”

A weekly options exiting strategy is continually encouraged by Weekly Options USA, so that members exit and profit when sufficient profit has been achieved; and avoid the so easy “GREED” factor, and then have a losing trade!

As an example of this we look at Moderna (MRNA) – a call option trade recommended on Monday, July 19 – which provided profits of 150% on the day.

But alas, this upward movement was not to continue however! 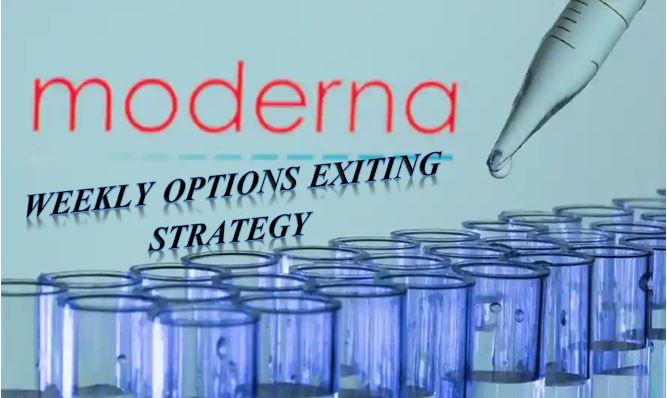 On Monday, July 19, 2021, a Moderna Weekly Options trade was recommended to our members based on several catalysts.

READ Details of the successful Weekly Options Exiting Strategy on Moderna that occurred on Monday in the article.....

On Tuesday the Weekly Options Exiting Strategy on Moderna Re-Visited.....

This re-visit to our weekly options exiting strategy on Moderna was brought to my attention when one of our members from “Weekly Options USA” contacted me and asked,

“Ian, MRNA I am up $3,680 on your alert. I want to close the option and take my money. What’s your opinion to stay in longer or take your earnings? Thanks.”

I was actually floored for a while that a member was still holding the trade. However, I quickly agreed to his weekly options exiting strategy on Moderna as soon as possible – pointing out that it was.....

“Better to have a bird-in-the-hand instead of waiting for two-in-the-bush!”

Why the Weekly Options Exiting Strategy Worked Out.....

Admittedly, the stock price continued upwards until nearly midday, reaching potential profits of 323% ($3,557 on top of cost), but this did not last. Just before midday the stock price plunged dramatically, and continued to do so in the after-hours trading session.

Why the Stock Price Plunge on Moderna Stock?

Moderna (MRNA), the COVID-19 vaccine maker, was the most heavily traded company on Wall Street ahead of its debut in the S&P 500 on Wednesday.

During Tuesday's session, Moderna surged as much as 9% and fell as much as 7%. The stock has gained about 18% since July 15, when S&P Dow Jones Indices announced its addition to the S&P 500.

After the bell, Moderna dropped an additional 1%, also in heavy volume.

The latest volatility in Moderna's stock comes as concerns increase over the highly contagious Delta variant of COVID-19, now responsible for the majority of new infections. Fears about a resurgence in the virus slammed Wall Street on Monday.

Moderna stock could move higher in the coming weeks as MRNA has received price-target hikes from J.P. Morgan Securities and Goldman Sachs to $131 and $299, respectively.

Separately, Takeda Pharmaceutical said it would supply an extra 50 million doses of Moderna's vaccine to Japan.

It is possible that more analysts will jump on the positive bandwagon, which will mean that Moderna stock could move higher in the coming weeks.

Of the 13 analysts covering the stock, eight still call it a tepid "hold." Plus, today's price-target hikes put MRNA's 12-month consensus price target at $195.93, which is a 35.2% discount to current levels.

MRNA has now snapped a four-day win streak, though in the last nine months alone, the equity is up an incredible 323.5%.

Employing a Weekly Options Exiting Strategy Is Essential For Sound Profit As Well As Peace-of-Mind!

What Further Moderna Weekly Optrions Trades Will We Recommend?