“Weekly Options Members” are now up 514% potential profit.
Further profit is expected before the expiry of the options trade on February 12.

Twitter stock took off in Wednesday trading after the social-media company's latest results and commentary helped relieve concerns about how the service will fare in the new reality.

Meanwhile, Weekly Options Traders have seen their trade that they executed on Monday, February 01, jump to 514% potential profits.

The stock continues to perform well, and there is likely to be further profits to be made before the expiration of the options trade.

Twitter stock surged more than 13 % yesterday after presenting its earnings report after the close of trading on Tuesday.

Amid the current stock market rally, Twitter shares are at new highs.

Twitter generates money from selling ads to businesses. The company is attempting to become the go-to source of updates for live events, including sports, breaking news and entertainment. Higher traffic and engagement levels will increase ad demand on Twitter, boosting ad prices and the company's sales. 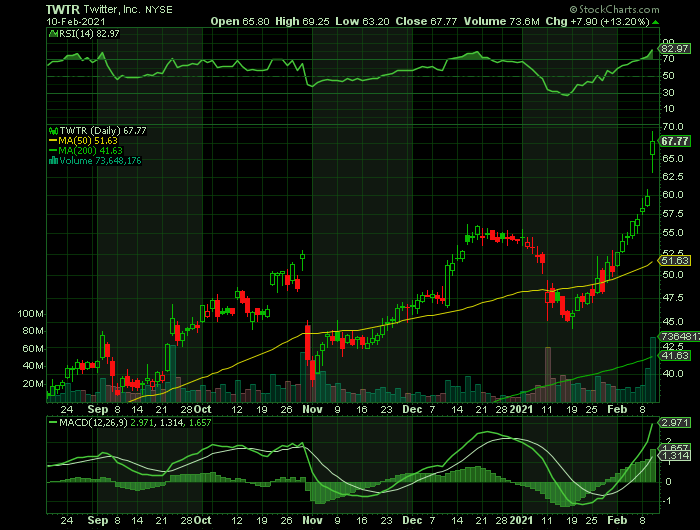 Twitter stock is becoming more profitable as it scales its revenue base. Its operating income soared 65% to $252 million, as its operating margin expanded to 20%, up from 15% in the year-ago quarter.

The Catalysts Behind The Trade…..Read the full recommendation HERE…..

Twitter stock is in a strong position ahead of earnings, which it is set to report Feb. 9 after the closing bell.

In the most recent quarter — reported on Oct. 29 — the company reported better-than-expected Q3 results, but weak user growth. Twitter ended the quarter with 187 million daily active users, well below estimates of 195 million. It added just 1 million new users, vs. 20 million in the previous quarter and 6 million in the year-ago period.

Driven by a rebound in advertising demand, revenue climbed 14% to $936 million, above consensus of $777 million. Adjusted earnings of 19 cents per share topped views of 14 cents.

KeyBanc analyst Justin Patterson wrote in a client note Thursday that his view of Twitter now values the stock at $65, giving it a Buy rating.

In the note, Patterson says that Twitter has made significant improvements to its main product, the Twitter app for the web and mobile devices, which will help the company generate more money.

“We believe Twitter has made meaningful strides to improve its platform for users and advertisers. User adoption of Topics continues to grow rapidly, providing both a better user experience and improved targeting for advertisers,” he wrote in the note.

The analyst believes a cyclical ad recovery, a ramp-up in direct response products and new product experiences like Revue, with an estimated total addressable market of $36 billion, will lend upside to the current consensus estimates for the company.

Patterson calculates that the improvements for both the company’s ad customers and its members have positioned the company to boost revenue more than 20% a year through 2022.

Despite the potential fallout from banning former U.S. President Donald Trump from the platform, Patterson thinks the action hasn’t yet caused users to flee the platform. Rather, he estimates that the company will grow its daily user base by about 10% year.

Excellent profit from Twitter stock within a short period of time!

However, any members still holding the trade there is still a chance that this profit could be exceeded.

Looking ahead, Twitter guided for first-quarter revenue of between $940 million and $1.04 billion. The company also said it plans to increase its number of employees by more than 20% in 2021, which will contribute to a 25% increase in expenses.

“With product catalysts in the near and medium term, we have more conviction in >20% annual revenue growth,” Patterson wrote in a note. KeyBanc has an Overweight rating and $80 target.

Morgan Stanley analyst Brian Nowak said Twitter’s new MAP 2.0 and other products will be key to the Twitter growth story.

“These are the types of micro-level improvements that are important to driving durable outsized growth...and advertiser/agency incremental adoption of this product is likely to be important to determining how fast revenue can really grow throughout ‘21,” Nowak wrote.

“While the full impact of MAP launch and iOS 14 changes are still unknown, we continue to see expansion of Twitter’s limited DR ad spend as a material growth driver for the next three years, while Twitter should have a more limited ‘21 iOS revenue impact vs peers,” Post wrote.