And, “Weekly Options” Members are Up 103% Using A Weekly call Option!
Can More Profit Be Expected?
Don’t Miss Out On Further Profit!

SoFi Technologies Inc (NASDAQ: SOFI) stock, like many of its peers in the fintech sector, has been taking a hammering over the past few months.

However, that all changed Wednesday with shares of SoFi on the move after the company announced it received approval to become a Bank Holding Company.

The Office of the Comptroller of the Currency and the Federal Reserve approved SoFi's applications to become a Bank Holding Company through its proposed acquisition of Golden Pacific Bancorp.

The transaction is expected to close in February. SoFi said it plans to operate its bank subsidiary as SoFi Bank, National Association.

And Members Profit More Than 100% in 1 Day on the SoFi Technologies Trade.....

To view the actual trade sent to members CLICK HERE.

Its financial services allow its members to borrow, save, spend, invest, and protect their money. The company offers student loans; personal loans for debt consolidation and home improvement projects; and home loans. SoFi Technologies, Inc. also provides cash management, investment, and other related services. In addition, it operates Galileo, a technology platform that offers services to financial and non-financial institutions; and Apex, a technology-enabled platform that provides investment custody and clearing brokerage services.

The company was incorporated in 2020 and is based in San Francisco, California.

On June 1, the company went public through a reverse merger with Social Capital Hedosophia Corp., a special purpose acquisition company (SPAC). SoFi Technologies stock ended its first day at $22.65. After trading between $20 and $25 for the first few weeks, SOFI shares plunged 20% in July.

The Major Catalysts for the SoFi technologies Weekly Options Trade….

"Tell me where you can find a bank that's going to give you 40% to 50% revenue growth and expanding margins," Virtus Investment Partners' Joe Terranova said Wednesday.

When comparing SoFi Technologies to other banks, the company's prospects really stand out. Terranova said, and that he owns shares and has no plans to sell because SoFi offers the opportunity to own a bank that also has the characteristics of a growth stock.

The much-needed sentiment boost could help kick off a turnaround and Wedbush’s David Chiaverini believes the final hurdle cleared on the path to becoming a bank should “accelerate earnings growth.”

However, that is not the only thing the banking disruptor has going for it. “The company is a one-stop shop for financial services and this is a significant competitive advantage over neobank competitors who tend to focus on niche offerings rather than the full financial picture,” the 5-star analyst said.

SoFi Technologies is also well-positioned to compete with legacy consumer finance providers due to its “streamlined product offering,” while a younger age group are also more likely to be attracted to the company rather than traditional banks, who are seen as out of date, unfriendly fee-wise, and given their business segments often “operate in silos,” often have “friction” in the cross-selling process.

In contrast, SoFi has a competitive advantage, due to its integrated technology platform Galileo, which provides a “seamless cross-buying experience aimed at a digitally native younger cohort.”

Moreover, the company has been growing at a fast pace and is expected to continue doing so. In 4Q21, members crossed the 3 million thresholds, well above the 1.7 million notched a year ago and far above the 1 million of two years ago.

Likewise, revenue growth has been impressive; from $600 million last year and $450 million beforehand, the company has guided to almost $1 billion of revenue in FY2021E.

While SoFi Technologies has a five-year plan in place, which Chiaverini thinks might be “overly optimistic" (the revenue forecast for 2025 is $3.7 billion compared to Chiaverini’s $2.9 billion estimate), the analyst still anticipates a CAGR of 28% over the next five years, an “exceptional level of growth,” which should see the company attain revenue of $3.5 billion by 2026.

Accordingly, Chiaverini initiated coverage on SOFI shares with an Outperform (i.e. Buy) rating and $20 price target. Investors could be pocketing gains of ~46%, should the analyst's forecast hit the mark over the next 12 months.

2021 is already firmly in the past, but on Wall Street, the year won’t be truly over until companies report 4Q21’s financials. That said, when SoFi Technologies steps up to the earnings plate next month, Morgan Stanley’s Betsy Graseck believes all eyes will be on the outlook for 2022.

After showing ~60% top-line growth in 2021, Graseck believes the bears are “skeptical of strong revenue growth continuing, looking for a sharper slowdown in 2022.”

The “forthcoming boost” for student loan refi originations will get another 3-month delay due to President Biden's extension of the federal student loan moratorium to May 1. To account for the delay, Graseck had already reduced her student loan refi forecast, and now predicts $5.1 billion of SLR originations in FY22. Graseck’s outlook presumes a return to a pre-COVID run-rate of $2 billion a quarter does not occur before early 2023.

Elsewhere, since SOFI last reported earnings in November, interest rate expectations have “risen,” which Graseck says puts a dampener on gain on sale margins from here on in.

Lastly, over each of the past 3 quarters, SOFI has managed to double its total member base on a year-over-year basis, which along with product growth, Graseck believes is an “important leading indicator for the forward revenue growth trajectory.” For the quarter, the analyst expects 10% sequential growth and a 74% uptick from the same period last year, with members reaching 3.2 million. Member engagement should also “continue to increase,” with products per member growing from 1.45x to 1.49x, exhibiting year-over-year total products growth of 90% and landing at 4.8 million.

To this end, Graseck reiterated an Overweight (i.e., Buy) rating for SOFI, although the shares get a new price target as the figure drops from $22 to $20.

“The moment we have all been waiting for has finally arrived,” wrote Rosenblatt Securities analyst Sean Horgan. He anticipates that consensus estimates will “move substantially higher” once analysts factor in the expected financial benefits of the charter.

SoFi shares have come under pressure in recent months, falling 31% over a three-month span as fellow newly public fintech players Robinhood Markets Inc. (down 65%) and Marqeta Inc. (down 45%) have suffered rough stretches as well. But SoFi could be in a position to separate from that crowd in time, Oppenheimer analyst Dominick Gabriele wrote, by winning more traction with institutional investors.

“Some investors were skeptical of SOFI’s ability to obtain this charter and thus this likely is an upside surprise,” he wrote. Gabriele called the charter “a significant and tangible checkpoint in achieving SOFI’s ultimate goals of further consumer engagement and the competitive advantages SOFI ultimately looks to obtain.” 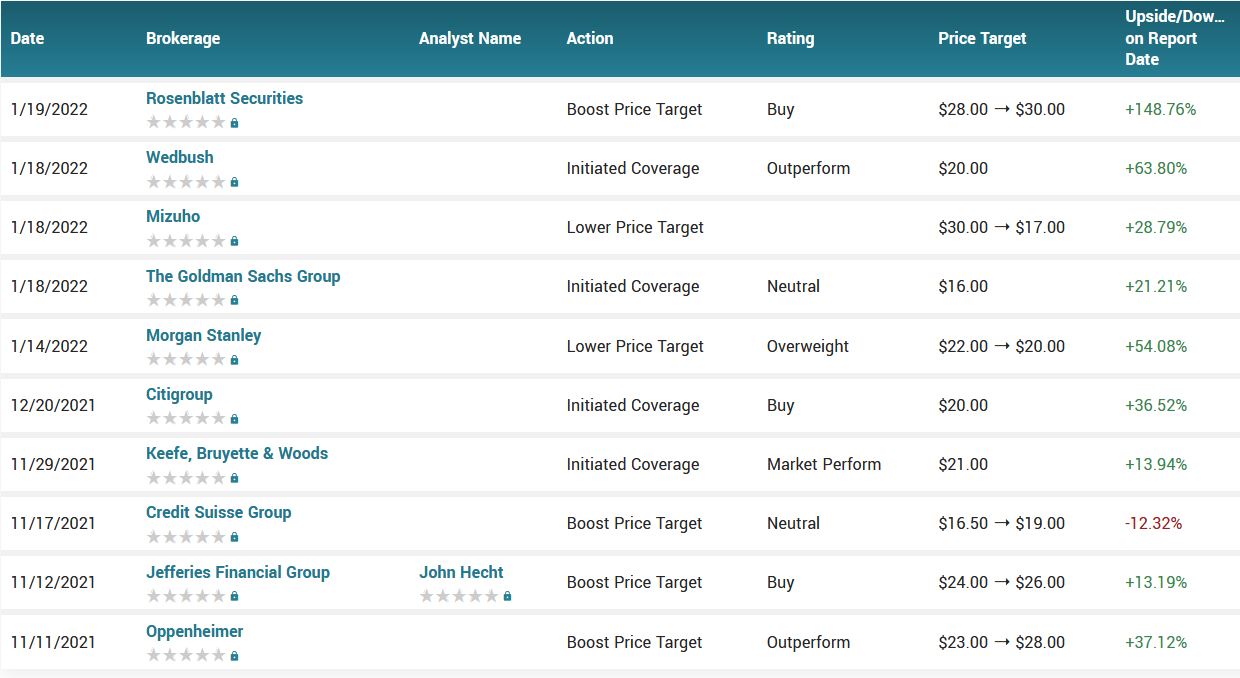 On Wall Street, most back the Morgan Stanley analyst’s take; the stock has a Strong Buy consensus rating, based on 6 Buys vs. 2 Holds. The overall target remains at Graseck’s prior objective of $22.

SoFi Technologies pulled back on Friday, along with the rest of the market, which now provides another possible option call trade if the market swings to the positive again.

We Have Had A Successful SoFi Technologies Trade!

What Further SoFi Technologies Weekly Trades Will We Recommend?

Back to Weekly Options USA Home Page from SoFi