Stock Bounces, And “Weekly Options Members” Make 456% AND 161% Potential Profit For The Week!
Time To Exit?

Friday saw NVIDIA Weekly Options climb on news of a 4-to-1 stock split. However, there are still several catalysts pushing these prices upwards. The major catalyst is NVIDIA’s earnings reports next Wednesday, May 26, 2021, after the market closes.

Meantime, there are 2 recommendations running for “Weekly Options Members,” which are already showing potential profits of 456% and 161%, respectively.

Is it time to exit these trades?

Due to the market fluctuation during the past week, members have been able to run concurrently two NVIDIA weekly options trades, both of which have been very profitable so far.

NVIDIA has been one of the best performers in the tech sector in recent years as its name has become synonymous with artificial intelligence, self-driving cars, cloud computing, and high-performance gaming PCs.

NVIDIA's business appears to be on a sound basis. Except for a brief pullback in demand for its data center and gaming chips in 2018, NVIDIA has been delivering solid growth over the last several years.

Over the last five years, NVIDIA's earnings per share have climbed from $1.08 to $6.90 through the end of fiscal 2021 in January. That improvement is due to better margins, as the product mix has shifted to higher-margin chips in the data center segment. Plus, people who play video games on PCs are continuing to upgrade to higher-priced RTX gaming GPUs, which is great for NVIDIA's bottom line.

Why Friday’s Jump for the NVIDIA Weekly Options Call Trades…..

The Santa Clara, Calif.-based company said the stock split will make its shares more accessible to investors and employees. The Nvidia board of directors approved the stock split, but it still must be approved by shareholders at the company's annual meeting on June 3.

In a note to clients, Bryson said he expects Nvidia to post strong first-quarter results driven by sales of graphics processors for PCs.

"Our thesis remains unchanged as we continue to believe Nvidia will realize longer-term outperformance tied to its leadership in AI and gaming," Bryson said.

As well, on Thursday, Oppenheimer analyst Rick Schafer maintained his outperform rating on Nvidia stock with a 12- to 18-month price target of 700.

He sees upside in the first quarter from video games and cryptocurrency.

The maker of graphics and high-performance computing chips NVIDIA Corporation (NASDAQ:NVDA) reports earnings next Wednesday, May 26, 2021, after the market closes.

NVIDIA is a market-leading provider of graphics processing units (GPUs) and AI solutions. Its brand name has become synonymous with best-in-class graphics in video games and high-performance computing in data centers. In fact, NVIDIA has over 90% market share in the supercomputing accelerator market.

NVDA stock has had a tumultuous eight months. This year alone, NVDA has gone on several runs, followed by steep drops. Shares have ranged in price; from a low of $462 in March to an all-time high close of over $645 in mid-April. Currently trading in the $560 range — off April’s mark by about 13% — and approaching a first-quarter earnings report that’s expected to be a blockbuster, seems to be a good time for this options play. 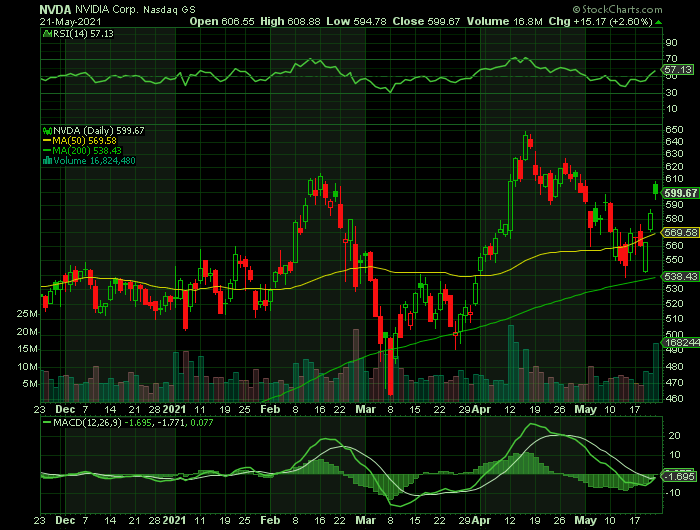 The Major Catalysts for The NVIDIA Weekly Options Call Trade.....

Nvidia is expected to release its Q1 fiscal 2022 results on May 26. Previously, though, the company had already issued revenue guidance of $5.3 billion for the quarter, plus or minus 2%.

On Apr. 12, however, Nvidia announced that revenue for the quarter is tracking above those projections. In addition, the company noted that it has sufficient supply on hand to support sequential growth beyond Q1 — no small feat during a global chip shortage.

According to Cathie Wood's ARK Invest analysis, accelerators like NVIDIA GPUs will displace central processing units (CPUs) as the dominant processors in data centers by 2030, growing at 21% annually over that period. That opens the door to a $41 billion market opportunity for the chipmaker.

Additionally, factoring in other use cases like enterprise and edge AI, management believes its total addressable market in the data center sector will actually hit $100 billion by 2024.

NVIDIA's Arm-based Tegra CPUs power infotainment and navigation systems for high-end automakers like Audi and Lamborghini. They also power its Drive onboard computers for autonomous vehicles.

NVIDIA generated 3% of its revenue from automotive chips last quarter. That's just a tiny sliver of its business, and the unit faced severe headwinds last year as the pandemic disrupted the production of new vehicles. The global semiconductor shortage could further delay that recovery.

But after those headwinds wane, NVIDIA's automotive business should recover and gradually account for a larger slice of its revenue. Until then, NVIDIA should continue to generate high double-digit percentage revenue and earnings growth as it sells more gaming and data center GPUs.

Cryptocurrencies are hot once again, which means that demand for graphics processing units (GPUs) for crypto mining rigs is through the roof. Nvidia has been through this cycle before and learned a painful lesson. Crypto miners can be big business, but they compete against NVDA’s core customer base for graphics cards. That results in bad PR when stock runs out. Plus, the crypto market can dry up without warning. In 2018, this effect hammered NVDA stock when miners suddenly stopped buying.

This time, though, the company is doing things differently and managing the crypto market much more carefully. Acknowledging mining as an actual line of business, NVDA created a GPU specifically for that market. Additionally, it took measures to prevent miners from snapping up all its new consumer GPUs. New graphics cards will automatically throttle performance if used for crypto mining.

Nvidia’s new RTX 3000 series GPUs are still in short supply, but consumers aren’t competing against crypto miners to buy them now. Meanwhile, the new crypto cards are selling better than expected. In its Q1 earnings update, the company noted that it has already sold $150 million worth, compared to the projected $50 million.

Salesforce is in the midst of acquiring enterprise communications platform Slack Technologies in a $27.7 billion cash-and-stock deal. Assuming the deal closes, Slack will provide Salesforce with a jumping-off point to cross-sell its CRM solutions to small-and-medium-sized businesses.

This product is a custom designed, Arm-based processor aimed at data centers. NVDA says that its first data center CPU is optimized to deliver 10 times “the performance of today’s fastest servers on the most complex AI and high performance computing workloads.”

Of course, Nvidia has always been about GPUs, so its first data center CPU is a shot across the bow of PC processor leaders. If Grace lives up to claims, it has the potential to significantly grow Nvidia’s data-center market. Back in Q4, that market brought in $1.9 billion.

Nvidia announced new devices across its portfolio and launched a new bit of gaming software. To begin with, the company unveiled a new wave of gaming laptops, flaunting its latest GPUs. This was followed by the reveal of new collaborative laptops with the likes of Dell (NYSE: DELL) and other consumer hardware names. On top of all that, Nvidia GPU owners now have access to GeForce NOW, powering optimal cloud gaming experiences.

Baird analyst Tristan Gerra rates the stock an Outperform (i.e. Buy) along with an $800 price target, which implies ~45% upside. The bull thesis is based on "Nvidia’s strong near-term positioning in AI data center markets and longer-term opportunities across many accelerated computing applications."

"As Nvidia increasingly moves to platform solutions targeting and enabling all AI markets, while diversifying its architecture offering, the company is poised to over time dominate data center. Omniverse gives us an early glimpse of a virtual 3D world which Nvidia is at the forefront and ultimately yielding to a matrix computing world. More near term, GTC-announced foray into CPUs will expand Nvidia's computing TAM," Gerra opined.

NVDA stock has appreciated well over 1200% over the past five years. The company’s strategy and execution bodes well for the long-term growth prospects of the stock.

For the most part, Nvidia does not seem to be slowing down one bit. While demand for its wares continues to surge from the gaming and crypto-mining markets, the company continues to innovate. It is also benefiting from strong growth in GeForce desktop and notebook GPUs, as well as a surge in Hyperscale demand which remains a tailwind for the company’s Data Center business. Expansion of NVIDIA GeForce NOW is expected to drive user base. Further, solid uptake of artificial intelligence-based smart cockpit infotainment solutions is a boon.

Another catalyst that could provide additional upside is growing demand for NVIDIA's new Cryptocurrency Mining Processors (CMPs). NVIDIA launched this new line of chips recently to insulate its gaming segment from potential volatility if crypto demand drops off like it did in 2018.

Shares of NVIDIA have gained +62.8% in the past one-year period.

Or, Will NVIDIA Stock Price Continue Its Upward Momentum?