And, “Weekly Options” Members Continue To Profit – Up Another 150% Using A Weekly Call Option!
Can More Profit Be Expected?

Micron Technology Inc has carried impressive momentum into 2022, thanks to the memory specialist's outstanding fiscal 2022 first-quarter results, released on Dec. 20.

And, “Weekly Options” Members potential profit is up 150% using a Weekly Call Option!

On Monday, January 03, 2022, a Micron Technology Inc Weekly Call Options trade was recommended to our members based on several catalysts.

Shares of Micron Technology Inc recently changed hands at $96.78 Wednesday afternoon, January 05 putting them on track to eclipse the record close of $96.56 that they established on July 14, 2000, according to Dow Jones Market Data.

Micron shares rose for the third straight trading session and continued their strong recent rally. The chip maker’s stock has gained about 38% over the past three months amid optimism about improving trends in the memory market.

An article “Micron Technology Earnings” was available to all readers on December 19, 2021…..CLICK HERE to read the details.

Micron Technology Inc stock continues to hover around the $93 to $ 95 mark, and will likely see the price continue to climb in the near future.

Join us and see what other trades we are proposing!

Micron is counting on robust memory demand to help it deliver record revenue and solid profitability in the current fiscal year. The company points out that memory demand remains strong across all its end markets. For instance, in personal computers (PCs) and graphics, Micron believes that inventory adjustments at most customers are already done. As a result, Micron sees stable demand for memory chips from the PC market in 2022.

Micron management anticipates PC sales in 2022 to remain consistent with 2021 levels and adds that more PCs are now using low-power DRAM. More specifically, low-power DRAM accounts for 20% of the PC industry's DRAM bit demand at present, and that number is expected to head higher in 2022 and beyond.

On the other hand, more and more PCs are now turning to solid-state drives (SSDs) for faster storage. Around 100 million SSDs were shipped in the first quarter of 2021 as compared to 64 million hard-disk drives (HDDs). Technavio estimates that global SSD sales will continue to increase in the long run, clocking an annual growth rate of 23.6% through 2025. Given that Micron's latest generation of client SSDs have been qualified for use by several PC original equipment manufacturers (OEMs) and are already in volume production, it looks well-placed to capitalize on growing SSD demand.

Given that 5G smartphones are using 50% more DRAM and double the NAND flash content as compared to 4G smartphones, and their shipments are expected to increase 40% in 2022, it's easy to see why Micron expects a healthy demand environment to prevail in 2022. Additionally, the increasing adoption of SSDs in data centers is another tailwind for the memory market. Micron's data center revenue was up 70% year over year in the fiscal first quarter, and the company sees further growth in this segment as data centers deploy more SSDs instead of hard-disk drives.

So, rising memory demand will be Micron's biggest growth driver in 2022.

Micron Technology Inc delivered a knockout earnings report on Monday, December 20th, that not only resulted in a 14% weekly gain but revitalized the entire semiconductor space. The nation’s leading memory chip company posted a 33% jump in fiscal Q1 revenue and a 59% surge in adjusted EPS thanks to strong broad-based demand for its DRAM, NAND, and NOR chips. This prompted management to raise its full year outlook sending Micron shares on a high volume run to within $1.17 of its 52-week high.

Micron's revenue from the mobile business unit (MBU) increased 27% year over year to $1.9 billion in the fiscal first quarter. The segment produced nearly a quarter of the company's top line and was its second-largest source of revenue.

Micron Technology Inc pointed out that smartphones nowadays are using more DRAM (dynamic random-access memory) and NAND (short for "not and") flash memory. Management estimates that 5G smartphones are using 50% more DRAM to enable faster processing compared to 4G devices. Meanwhile, the amount of flash storage in 5G smartphones has doubled in comparison to 4G smartphones.

What's more, Micron Technology Inc management anticipates that the amount of memory and storage used in 5G smartphones will increase further thanks to the increasing adoption of data-intensive applications, which should create the need for more bandwidth and computing speed. Management pointed out that smartphone applications powered by artificial intelligence, 5G wireless technology, and emerging tech trends such as the metaverse will drive secular growth in the memory and storage demand.

Micron Technology Inc estimates that 700 million 5G smartphones could be shipped in 2022, up significantly from this year's shipments of 500 million units. By 2025, annual 5G smartphone shipments are expected to hit 1.5 billion units as per third-party estimates, indicating that Micron's mobile revenue opportunity is all set to expand rapidly in the coming years.

As such, Micron's mobile business could keep growing at an impressive pace for a long time to come, especially considering its standing in the industry and the efforts it is undertaking to capture a bigger share of the market.

Micron's low-power double data rate 5X (LPDDR5X) DRAM was recently validated by Taiwanese chipmaker MediaTek for use with its Dimensity 9000 5G flagship smartphone chipset. According to Micron, its LPDDR5X DRAM can deliver a peak performance that's 33% faster than the previous generation LPDDR5 memory.

The good part is that Micron's validation by MediaTek could open an opportunity for the company to increase its mobile DRAM market share. That's because MediaTek commands a 40% share of the smartphone application processor market, according to Counterpoint Research. One of the reasons why MediaTek dominates the smartphone processor market is because of its 5G chips, which is a positive sign for Micron.

All of this indicates that Micron could keep benefiting from the 5G smartphone market in the long run, and that could help it remain a top growth stock for a long time to come.

As well, analysts believe that Micron Technology Inc is witnessing growing demand for memory chips from cloud-computing providers and acceleration in 5G (fifth-generation) cellular network adoptions. Rising mix of high-value solutions, enhancement in customer engagement and improvement in cost structure are growth drivers as well. Further, 5G adoption beyond mobile is likely to spur demand for memory and storage, particularly in (Internet of Things) devices and wireless infrastructure.

Micron Technology Inc is seeing rising demand from the automotive and industrial markets as well. Micron's automotive revenue was up 25% year over year in Q1 as demand for driver-assistance systems and in-vehicle infotainment is driving the need for more memory chips.

Additionally, growing electric vehicle (EV) adoption and the automation of cars will increase Micron's addressable market. The company points out on its earnings conference call:

New EVs are becoming like a data center on wheels, and we are already seeing examples of 2022-model-year EVs supporting level 3 autonomous capability with over 140 GB of DRAM and also examples with over 1 TB of NAND.

Despite the stock’s 37% surge since the end of October, analysts are bullish on Micron’s growth prospects. The vast majority called the stock a buy in the wake of the Q1 report and many see at least 20% more upside. Rosenblatt Securities is a clear outlier with a wildly optimistic $165 price target. 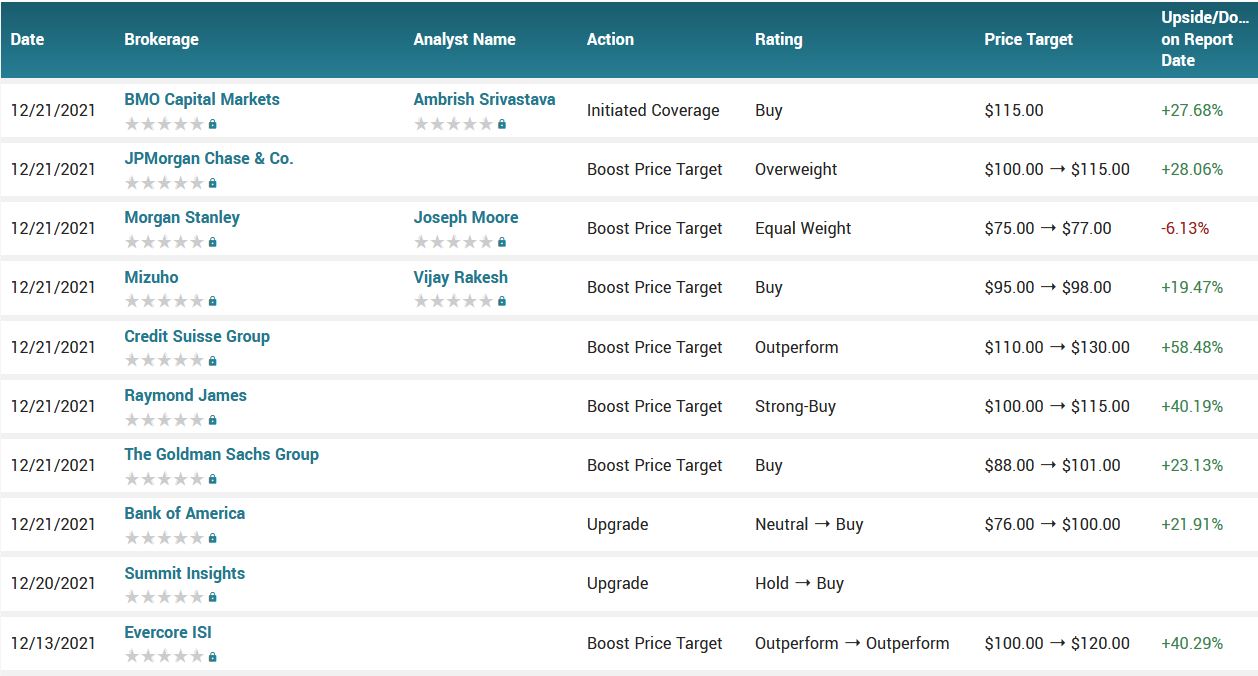 With Wall Street playing catch up with its 2022 earnings forecast for Micron, the latest consensus is up to $11.51. So, at 8x forward earnings and a reinstated quarterly dividend, it’s easy to see why putting another weekly options trade on this chipmaker should be a sound move.

Micron Technology Inc stock has shot up more than 25% in the past three months, but the stock is still dirt cheap. It trades at just 14 times trailing earnings and 10 times forward earnings. These multiples are way lower than the NASDAQ 100 Index's earnings multiple of 34.7.

“[L]ong-term agreements (which cover ~75% of Micron’s revenues) are helping provide excellent visibility for management and, when coupled with generally lean inventories, continue to point to the [February quarter] as the bottom with clear line of sight to acceleration into Micron’s 2HFY22,” he wrote in a note titled: “Visibility To A Bottom Intensifying”

Muse also discussed recent COVID-19 protocols in Xi’an, China, which have caused disruptions for Micron and others that operate facilities there, and the need to comply with new regulations around workplace staffing meant to help curb spread of the virus.

“We note that Samsung’s [Xi’an] facility manufactures front-end NAND wafers, while Micron’s is used instead for back-end test and assembly (which they noted they can flexibly shift around their global footprint),” he wrote. “As a result, the impact of Xi’an shutdowns is likely to be much more pronounced on NAND pricing than DRAM pricing, with the market likely to get a better view of the overall impact in the coming weeks.”

Overall, Muse pointed to management’s expectations for “relatively balanced” supply and demand across DRAM and NAND throughout the calendar year. Such a dynamic would represent “a clear positive for memory stocks if [it] proves true,” he wrote.

Micron Technology Inc management pointed out on the company's December 2021 earnings conference call that it sees a "healthy industry supply demand balance" in the memory industry in 2022 on account of "prudent industry capex and very lean supplier inventories." If a supply chain disruption lowers output, customers would find it difficult to get their hands on memory chips -- at least temporarily.

Such a situation would boost prices of memory chips, as more customers would be competing for a smaller supply pool of DRAM and flash memory, which go into several applications ranging from data centers to automotive to smartphones to PCs. It wouldn't be surprising to see memory demand growth outpace the increase in supply in 2022 and create a healthy price environment.

Micron Technology Inc has taken steps to ensure that it doesn't miss out on a potential increase in prices by signing agreements with suppliers so that it has enough stock to meet the end-market demand.

Wall Street anticipates Micron's earnings to increase 47% in the current fiscal year, followed by a 29% jump in the next. Such impressive growth won't be possible without robust memory pricing.

The Micron Technology Inc rally could have further to go. Big Money buying in the shares is a signal to take notice. Shares could be positioned for further upside. Given the historical gains in share price and strong fundamentals, this stock could be worth another weekly options trade in the near future.

What Further Micron Technology Inc Weekly Trades Will We Recommend?