“Weekly Options” Members Profit Up 145%!
Since A Pull-Back and Catalysts Still In Place
Another Trade Anticipated!

Market volatility has helped provide another profitable Weekly Options Trade on Apple. With a down-day Monday the entry price was low; but on Tuesday the stock jumped providing a potential profit of 145% before pulling back again.

There are many positive catalysts, particularly an upcoming earnings report  on July 27, to see the stock rebound in the near future.

Another options trade is now being anticipated based on the original catalysts, as well as further positive developments during the past week. 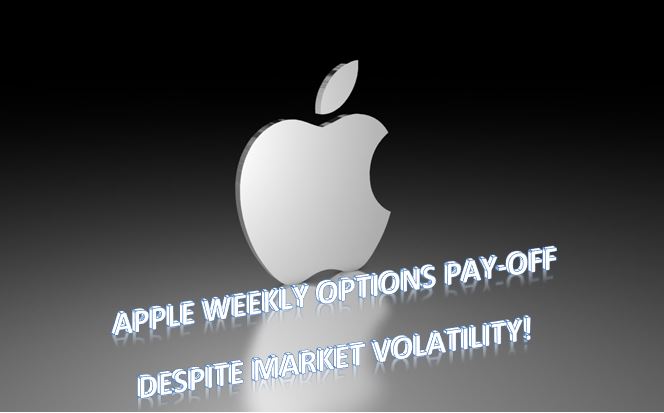 On Monday, July 19, 2021, another Apple Weekly Options trade was recommended to our members based on several catalysts.

Bullishness in the market for the tech stock comes ahead of Apple's fiscal third-quarter earnings report, which is set to be released on July 27.

Analysts on average expect Apple to set a new third quarter revenue record of $72.9 billion, up around 22% from $59.7 billion in the year-ago quarter.

Based on 10 analysts' forecasts, the consensus EPS forecast for the quarter is $0.99. The reported EPS for the same quarter last year was $0.64.

For the last reported quarter, it was expected that Apple would post earnings of $1 per share when it actually produced earnings of $1.40, delivering a surprise of +40%.

Apple’s fortunes are heavily reliant on the iPhone, which is by far its biggest revenue contributor. The device accounted for 53.5% of net sales in the last-reported quarter, wherein sales increased 65.5% year over year to $47.94 billion.

Strong demand for the 5G-enabled iPhone 12 is expected to have driven the top line in the to-be-reported quarter.

Recent reports have noted Apple has instructed manufacturers to increase the build rates for the initial run of new iPhones from 75 million to 90 million – a clear sign the company is expecting to sell more units in the near-term than previously anticipated.

Deutsche Bank’s Sidney Ho notes this is in line with a recent dbDIG survey, which points to “strong consumer interest” in upgrading to 5G.

“While there has been some pushback from investors that the next iPhone launch doesn't offer many new features vs. the iPhone 12 family,” Ho said, “~65% of the surveyed indicated that they had an iPhone that did not offer 5G (iPhone 11 Family and older) so that feature should be a strong incentive to upgrade by itself.”

Ho believes Apple is “well positioned” to better the analysts’ expectations, seeing “potential revenue upside” in iPhones (both units and ASPs), Accessories (AirTags), and based on preliminary Gartner data, Macs too. Ho thinks the company is still reaping the benefits of the remote work/school environment, while the impact of component shortages on its Mac and iPad businesses has been “adequately discounted.”

On Monday, July 19, 2021, “Weekly Options Members,” entered the trade mentioned above for $1.01 – a lot cheaper due to market volatility.

On Tuesday, July 20, Apple Weekly Options trade had reached a high of $4.81 – up 175% - again due to market volatility but in this case the market was positive.

Since then the market volatility has caused Apple to fall back slightly.

All set for another Apple weekly options trade – as the catalysts are still applicable.

SEE WHAT WE WILL BE RECOMMENDING BASED ON MARKET VOLATILITY

The pull-back last Friday, July 16, due to market volatility, provided another opportunity to enter an Apple options trade again – and as long as the market decides to move back into the green this week – the catalysts from last week still apply; and now, several more are applicable.

However, since that report there has been several new developments to bolster the recommended trade – and since the pullback on Friday a new Apple weekly options trade has become a very viable proposition.

1. Apple Pay Later - Apple is working on a new service that will let consumers pay for any Apple Pay purchase in instalments over time, rivaling the “buy now, pay later” offerings popularized by services from Affirm Holdings Inc. and PayPal Holdings Inc.

The upcoming service, known internally as Apple Pay Later, will use Goldman Sachs Group Inc. as the lender for the loans needed for the installment offerings.

The buy now, pay later system could help drive Apple Pay adoption and convince more users to use their iPhone to pay for items instead of standard credit cards.

2. Apple has boosted the production rate of its iPhones, instructing manufacturers to build 90 million iPhones this year, a 20% increase on the 75 million units it produced last year.

The renewed optimism in all things Apple is not surprising to J.P. Morgan’s Samik Chatterjee. The analyst recently told investors Apple is well set up to outperform in 2H21. In fact, the growing confidence means Chatterjee has added Apple to the firm’s Analyst Focus List as “a Growth idea.”

“The recent momentum led by better market share, drives us to also estimate higher sustainable volumes in future quarters, leading us to see a path to Apple outperforming investor expectations over a longer time horizon rather than just the upcoming earnings print,” the analyst said, confirming Apple is also a Top Pick.

To reflect the increase in build rates, Chatterjee has “modestly” increased iPhone volume expectations, but of more importance to the analyst is the “path to upside” for the shares in the medium-term.

To this end, Chatterjee rates Apple shares an Overweight (i.e. Buy), while slightly lifting the price target from $170 to $175. The revised figure implying shares will add 19.5% from current levels.

4. Momentum is expected to continue in the Services segment driven by App Store, Cloud Services, Music, advertising and AppleCare. The company recently launched Apple Podcast Subscriptions for listeners in more than 170 countries.

Apple’s endeavors to open up its ecosystem through partnerships with the likes of Samsung and Amazon are positives for its Services segment. The subscription-based Apple TV+, Apple News and Apple Arcade services are expected to benefit from the company’s strong installed base. Markedly, Apple currently has more than 660 million paid subscribers across its Services portfolio.

5. Future Development - Apple’s focus on user privacy, as reflected by its latest iOS 15, iPadOS 15, macOS Monterey, and watchOS 8 updates (all to be launched later this year), is a game changer.

6. Expected Earnings - Apple stock has an impressive record of positive earnings surprises, as it hasn't missed earnings consensus estimate in any of the last four quarters despite market volatility. In its last earnings report on April 28, 2021, Apple reported EPS of $1.4 versus consensus estimate of $1 while it beat the consensus revenue estimate by 15.41%.

Two analysts revised their earnings estimate upwards in the last 60 days for fiscal 2021. The Consensus Estimate has increased $0.09 to $5.19 per share. AAPL boasts an average earnings surprise of 23%.

7. Other Analysts Positivity - Loup Ventures’ co-founder and managing partner Gene Munster is of the opinion that Apple’s stock will rally higher in the coming months over-coming market volatility. He stated that “ultimately that I think the best days are still ahead of the company, whether it’s 5G, augmented reality, what they’re going to do in health care and transportation and other additional services.”

The growth recorded by Apple in various aspects of its business could see its stock price reach $200 by the end of 2021, Munster added. He is predicting a 40% increase in the stock price over the coming months.

"While share price performance post earnings may be more muted given Apple's recent outperformance, we are buyers heading into the iPhone 13 launch in September," Huberty said in a client note. "We see the combination of mature replacement cycles, increasing 5G adoption, improving retail store traffic, longer battery life and camera quality, and share gains against Huawei as drivers of iPhone outperformance relative to past cycles."

Huberty has June quarter revenues for Apple pegged at $74.7 billion, around 2% ahead of consensus, and September quarter earnings at $83.2 billion.

Apple shares are up nearly 12.4% year to date, with most of that surge coming the past few weeks. Incredibly, since June 1, Apple shares have rocketed 18%.

Looking ahead to F4Q, the “continued healthy comments” regarding Apple's supply chain, the dbDIG iPhone survey data and the raised build rates suggest “risks weighted to the upside,” even taking into account the present market volatility; although Deutsche Bank’s analyst Sidney Ho says component shortages impacting the Mac/iPad (not iPhone) “remain an area to monitor.”

Apple has a history of beating analyst estimates for earnings. And the current quarter's EPS trend is ticking higher with analysts. Additionally, money appears to be pouring into the stock as it breaks out to all-time highs despite the market volatility. Those are bullish signs that there may be more upside in the coming weeks and months.

The Apple Weekly Options Trade Was A Winner Despite Market Volatility!

What Further Apple Weekly Trades Will We Recommend?

Back to Weekly Options USA Home Page from Market Volatility