Although the company is not yet profitable, it sells for 3.7 times analyst estimates of 2021 bookings, very reasonable for this sort of growth.

Videogames have been one of the stock market’s star attractions in 2020, mostly powered by Covid-19 quarantines. With so many people spending time at home this year, it makes sense that video games are increasing in popularity.

Now, many of the companies that offer video games are seeing record numbers thanks to social distancing and work-from-home measures. This is an industry that still has a lot of upside, which is why investors might want to check out stocks that offer video game products and services at this time.

An estimated two billion people now play videogames on mobile devices. Videogame makers all benefit from the broad participation, but there are limited pure-play stocks on the theme.

Limited entertainment opportunities during the pandemic have led to great results from video game stocks, and Zynga Inc (NASDAQ: ZNGA) has been in the sweet spot of mobile and social games to fill a void in consumer lives.

Most people today own smartphones, and a Pew Research survey in 2019 found that 81% of Americans owned smartphones. That number has very likely increased in 2020, which means that there is a huge market for mobile gaming.

Acquisitions, internally developed titles, and improved monetization spurred by live events are driving rapid expansion of the company's business, and that trend should continue.

Zynga Inc. develops, markets, and operates social games as live services in the United States and internationally. The company's games are played on mobile platforms, such as Apple iOS and Google's Android operating systems, as well as on social networking sites, such as Facebook and Snapchat. It also provides advertising services comprising mobile advertisements, engagement advertisements and offers, and branded virtual items and sponsorships to advertising networks, agencies, and brokers; and licenses its own brands.

The company was formerly known as Zynga Game Network Inc. and changed its name to Zynga Inc. in November 2010. Zynga Inc. was founded in 2007 and is headquartered in San Francisco, California.

Zynga stock got crushed after hitting an all-time high at $15.91 just three months after coming public at $11.00 in December 2011, dropping to $2.09 in November 2012. It undercut that level by 31 cents in 2016 and turned higher, completing a double bottom reversal that initiated a new uptrend.

The rally reached 2014 resistance at $5.89 in May 2019 and broke out, but the stock spent the next 11 months bouncing along new support before last week's buying spike reached the highest high since June 2012. The next major resistance comes at the IPO opening print, so there's plenty of upside from the current level into that barrier.

Now, Zynga is one of the hottest mobile gaming companies with millions of loyal users. It’s a great example of a business that experienced a remarkable turnaround after a massive strategy shift. Zynga continues to spend heavily on new acquisitions including the recent purchase of Rollic, a “hyper-casual” videogame developer. Hyper-casual games are a rapidly growing type of video game that is easy for new users to pick up and start playing without a steep learning curve. Eight of Rollic’s games have been the #1 or #2 top free downloaded games in the U.S. app store. These are the types of moves that investors love to see and help to confirm that Zynga is committed to its mission statement of “connecting the world through games”.

Zynga’s CEO Frank Gibeau said “Rollic brings Zynga into the world of hyper-casual, which is one of the most exciting and fastest growing mobile gaming categories. Rollic’s large and diversified audience base will also be valuable for Zynga as the mobile games and advertising landscape continues to grow.”

Zynga’s Q2 earnings saw its highest quarterly revenue and bookings in the company’s history along with its best quarterly operating cash flow in over 8 years. Revenue increased by 47% year-over-year to $452 million largely driven by record online game revenue of $388 million, a year-over-year increase of 61%. This tells us that Zynga gamers are consistently spending on things like in-app purchases.

After a truly impressive quarter for Zynga, the company raised its full-year revenue and bookings guidance, which is a sign of strength during a period of uncertainty for many businesses. Zynga also completed the acquisition of Peak Games during Q2 for $1.8 billion, which adds even more successful mobile game franchises to the company’s portfolio. Although Zynga is a smaller company, it continues to make smart acquisitions and report strong earnings growth. These are great qualities to look for in a long-term investment.

Wall Street’s latest consensus estimate is calling for revenue of $626.37 million, up 58.65% from the prior-year quarter.

Looking at the full year, the Consensus Estimates suggest analysts are expecting earnings of $0.36 per share and revenue of $2.22 billion. These totals would mark changes of +3500% and +41.84%, respectively, from last year.

“We like Zynga for its leadership position in the mobile games space, the fastest growing segment within the video games industry. In our opinion, the company is well positioned to drive increases in bookings and adjusted EBITDA of 13% and 18%, respectively, between 2020E-2023E… we see call option value on management's ability to expand into new segments and platforms within mobile gaming and increase its international presence,” Handler opined.

Overall, Zynga gets a Moderate Buy from the Wall Street analyst consensus. This is based on 14 ratings, including 11 Buys, 2 Holds, and 1 Sell. The shares are trading at $9.37, and the $11.83 average price target suggests the stock has a 26% upside from current levels.

Zynga, with its acquisition-driven growth strategy could make slam-dunk investments in October and beyond, because it benefitd from consumer megatrends toward digital experiences and has convincing strategies for continued expansion in its market.

Zynga’s strong history of turning acquisitions into growth plays will lift its performance in 2021. As already mentioned, Chief Executive Officer Frank Gibeau said that eight of Rollic’s games reached one or two in terms of most downloaded. That is, they had over 250 million downloads.

Despite the pandemic disrupting the economy, gaming demand is still very strong. The Peak team and the Harry Potter team should come out strong out of the gate. 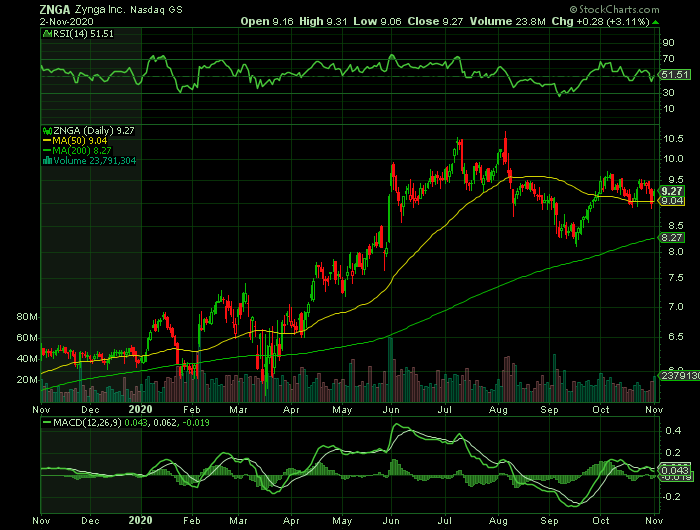