The Chinese e-commerce goliath Alibaba Group Holding Ltd (NYSE:BABA), an online and mobile commerce company, will find that newly drafted antitrust rules could make it tougher for the company to continue expanding its ecosystems.

China's State Administration for Market Regulation (SAMR) will seek public feedback on the drafted rules until Nov. 30. The SAMR could then finalize the rules to rein in leading internet companies like Alibaba.

Alibaba controls 56% of China's e-commerce market, according to eMarketer, and Alibaba Cloud is the country's top cloud platform provider.

Those ecosystems extend into the fintech market. Tencent's WeChat Pay and Alipay, which is owned by Alibaba's affiliate Ant Group, hold a near-duopoly in China's digital payments market.

The BAT companies (Baidu, Alibaba, and Tencent are often collectively referred to as the "BAT triumvirate" for their dominance of China's most important digital platforms) are also aggressively expanding investments which tether smaller companies to their sprawling ecosystems.

The Chinese government has repeatedly tried to rein in the BAT triumvirate in recent years – but has not been successful until last week when China's recent decision to pull the plug on Ant Group's eagerly anticipated IPO. The government already believed Alipay and WeChat Pay were getting too big to regulate, and Jack Ma's controversial speech at a recent government forum -- in which he compared China's state-backed banks to "pawn shops" -- seemed to seal Ant's fate.

In that context, it isn't surprising that China is now drafting new antitrust rules to weaken the top players and encourage new companies to enter the market.

The new antitrust rules could certainly hurt the BAT companies. All three companies could struggle with new limits on data collection, since they access user data to either craft targeted ads or optimize product listings. Loosening that grip could make it easier for smaller advertising, e-commerce, and social platforms to gain traction.

The new rules could undo Alibaba's exclusive agreements with merchants, which its top rivals JD.com (NASDAQ:JD) and Pinduoduo (NASDAQ:PDD) have repeatedly complained about. If that happens, Alibaba could be barred from delisting merchants who also sell their products on rival marketplaces.

It would also open the door to fresh competition from smaller e-commerce platforms or direct online sales from big brands. Alibaba could also be barred from using aggressive subsidies, such as free shipping, to drive smaller players out of the market.

The new rules could also make it easier for disruptive new platforms -- such as ByteDance's Douyin short video app (also known as TikTok overseas) and Jinri Toutiao news app -- to gain ground against the market incumbents.

Boosted by a first-time extra sales window between November 1-3, the annual Double 11 shopping extravaganza hauled in gross merchandise value of ¥498 billion (~$74 billion), amounting to 26% year-over-year growth, in line with the 26% uptick of 2019.

The event drew in 800 million participants, and Alibaba said that during peak activity, the platform was processing 583,000 orders per second. Overall, there were 250,000 brands selling discounted goods, including 31,000 overseas brands.

RBC analyst Mark Mahaney believes the festival’s continued success is a “sign of the durability of Chinese consumers’ consumption rebound since the trough of the pandemic.”

However, Mahaney also warns of the “increasing drumbeat of regulatory oversight on the Internet platforms.”

“We think the Anti-Monopoly Guidelines for the Internet Platforms published on 11/10 (esp. around merchant exclusivity and fair pricing) potentially carries greater implications for BABA vs. its eCommerce competitors, given BABA’s dominant scale in China Internet retail,” the analyst said.

As such, Mahaney expects the stock to come under pressure in the near term, a projection already playing out with shares down by 13% so far this week.

That’s not to say the fundamentals for Alibaba have changed much.

"The act is viewed as the government's first official attempt in defining and regulating monopolistic behaviors," Raymond James analyst Aaron Kessler wrote in a Nov. 10 note to clients. "We view the guidelines as an attempt to check the power of large tech platforms, including the largely e-commerce marketplaces."

U.S.-listed shares of Alibaba Group Holding Ltd. dropped 1.3% in Friday trading to close out one of the worst trading weeks on record for the company. Shares fell 13% on the week, making for their steepest weekly decline since the week that ended Jan. 30, 2015.

Alibaba wrapped up its Singles Day shopping festival Wednesday, reporting $74.1 billion in gross merchandise volume over the course of the event, but shares of Chinese names including Alibaba came under pressure over the course of the week as Chinese market regulators drafted new guidelines that seemed aimed at dominant marketplaces in the country. 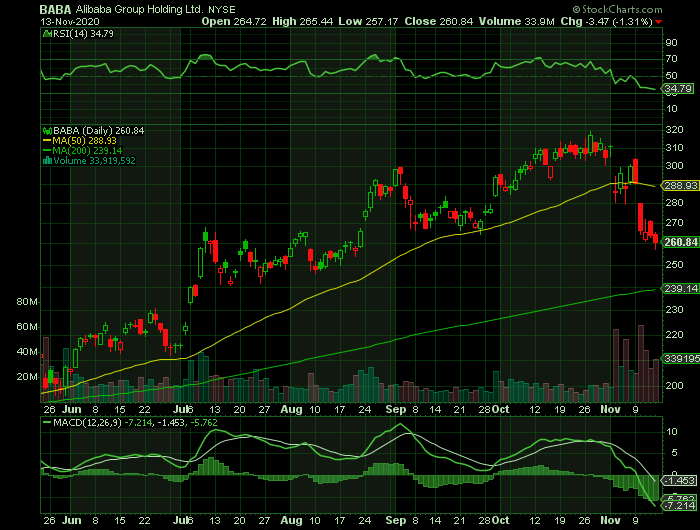 Enterprise cloud company Nutanix Inc. (NASDAQ:NTNX) will report earnings next Monday, November 23, 2020, after the market closes. Analysts expect Nutanix to post earnings of ($0.95) per share for the quarter. Analysts also forecast that Nutanix will announce sales of $300.17 million for the current fiscal quarter.

The business had revenue of $327.87 million for the quarter, compared to analysts' expectations of $319.46 million. During the same quarter last year, the firm earned ($0.57) earnings per share. The business's revenue was up 9.3% on a year-over-year basis.

Commenting on the quarter, Pandey said, "I am thrilled to report strong results to close the year, a performance all the more impressive given the uncertainty of the global market environment we are facing today."

Nutanix engages in the provision of enterprise virtualization and storage solutions. It specializes in cloud operating system that converges traditional silos of server, virtualization, storage, and networking into one integrated solution and unifies private and public cloud into a single software fabric.

Its products are offered through the Acropolis and Prism brands. The company was founded by Dheeraj Pandey, Ajeet Singh, and Mohit Aron in 2009 and is headquartered in San Jose, CA.

Nutanix has been shifting from giving guidance around total contract value (TCV) to annual contract value (ACV) as it has nearly completed its transition to a subscription model and ACV is now a better measurement of its performance.

The shift also corresponds with a change in incentives for its sales reps, who have been giving discounts on longer contracts and will now be incentivized to sell shorter contracts at full price.

For its fiscal first quarter, Nutanix expects ACV run rate to grow at least 20% and called for ACV billings of $118 million to $121 million.

The shift to ACV will have negative effects on billing and revenue, but with that decision, a change at the CEO position, and the Bain investment, Nutanix appears to be starting a new era.

Nutanix was upgraded by analysts at BidaskClub from a "sell" rating to a "hold" rating in a research note issued to investors on Monday, October 26, 2020.

A number of other equities research analysts also recently commented on the stock.

Finally, Morgan Stanley lifted their target price on shares of Nutanix from $23.00 to $24.00 and gave the stock an "equal weight" rating in a research report on Tuesday, September 29th. One investment analyst has rated the stock with a sell rating, nine have issued a hold rating and eleven have given a buy rating to the company's stock. The company has an average rating of "Hold" and an average target price of $30.88.

Based on what we know, the company appears to be off to a good start. 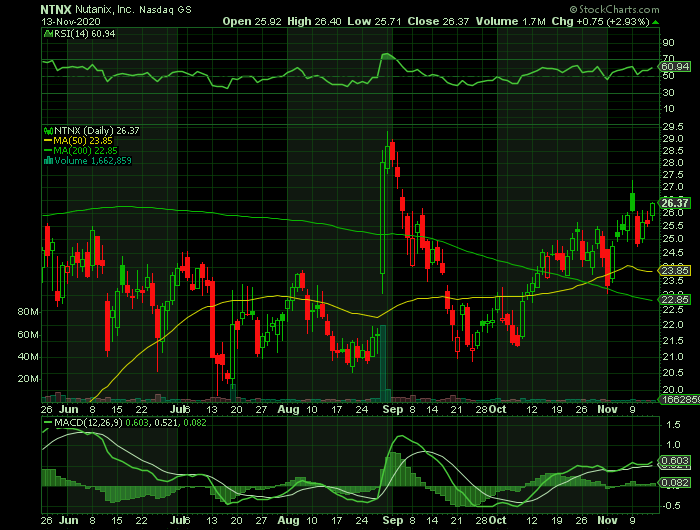