Under Armour Inc Class A (NYSE: UAA) is expected to deliver a year-over-year decline in earnings on higher revenues when it reports results this Friday, February 11, 2022, before the market opens, for the quarter ended December 2021.

This sports apparel company is expected to post quarterly earnings of $0.06 per share in its upcoming report, which represents a year-over-year change of -50%.

What trade will be recommended to members?

Under Armour will report earnings at on Friday, February 11, 2022, before the market opens.

Under Armour Inc Class A (NYSE: UAA) is expected to deliver a year-over-year decline in earnings on higher revenues when it reports results this Friday, February 11, 2022, before the market opens, for the quarter ended December 2021.

This sports apparel company is expected to post quarterly earnings of $0.06 per share in its upcoming report, which represents a year-over-year change of -50%.

For the full-year 2021 the company has upgraded its revenue expectation to be up 25% from a previously expected low 20's percent increase. Gross margins are expected to exceed the previous year's 48.6% margin.

For the last reported quarter, it was expected that Under Armour would post earnings of $0.15 per share when it actually produced earnings of $0.31, delivering a surprise of +106.67%.

Under Armour's stock has experienced a 10% pullback so far this year. Under Armour shares have also fallen off about 25% since the company's November earnings report.

Under Armour shares soared almost 10% to about $26.50 at the time after the company beat expectations for sales and profit, and raised its full-year guidance.

Under Armour, Inc. engages in the development, marketing, and distribution of branded performance apparel, footwear, and accessories for men, women, and youth.

It operates through the following segments: North America, EMEA, Asia-Pacific, Latin America, and Connected Fitness. The North America segment comprises of U.S. and Canada. The Connected Fitness segment offers digital fitness subscriptions, along with digital advertising through its MapMyFitness, MyFitnessPal, and Endomondo. applications.

The company was founded by Kevin A. Plank in 1996 and is headquartered in Baltimore, MD.

OTHER Influencing Factors for UNDER ARMOUR Earnings

Morgan Stanley upgraded its rating for Under Armour stock and lifted its price target from $23 per share to $24 per share.

Under Armour Inc. got a boost on Wednesday after one of the biggest banks on Wall Street said it sees an opportunity for the sportswear maker to outperform its competitors.

Under Armour shares rose 2.7% to $19.59 on Wednesday following the report.

Kimberly Greenberger, an analyst at Morgan Stanley who authored the research note, wrote that Under Armour's current valuation "has compressed and appears compelling." She also wrote that Under Armour has a "compelling setup" in 2022 because it has lower supply chain risk than its peers, a high chance of outperforming in China, positive feedback from retailers and will likely issue conservative guidance for the year.

"In our view, current trading levels suggest the market may have unfairly-penalized Under Armour's stock for holiday weakness in specialty retail without considering its differentiated model and product exposure," Greenberger wrote.

Sportswear and apparel companies experienced supply chain challenges suffered by many industries across the world last year due to the Covid-19 pandemic. Greenberger said Under Armour benefits from lower risk compared to its peers because a relatively higher percentage of its sales come from apparel instead of footwear. Under Amour also has a more geographically diversified manufacturing footprint, she wrote.

Apparel comprises about 65% of Under Armour's revenue, compared to a range of 30-40% at peers who rely more on footwear.

"This is an advantage because the apparel industry is on track to benefit from normalized inventory levels more quickly than footwear, as apparel producers have lower labor needs and more dormitory capacity for factory workers, and thus can resume production faster following any stoppages," Greenberger wrote.

Another reason for Morgan Stanley's bullishness is due to the regular checks that it does with retailers to see how brands are performing. Greenberger said the feedback from U.S. and European retailers about Under Armour "was markedly positive compared to prior checks."

"This gives us confidence that Under Armour's North America turnaround is working and international perception is improving, which could support higher revenue growth compared to pre-Covid trend," Greenberger wrote.

Moody's announces completion of a periodic review of ratings of Under Armour, Inc.

Under Armour, Inc.'s Ba2 corporate family rating reflects its track record of debt reduction and maintaining moderate financial leverage, along with its well-known brand and solid competitive position in branded performance apparel, footwear and accessories in the U.S. and internationally. The rating is constrained by its reliance on a single brand and limited geographic reach, which exposes the company to economic cyclicality and inherent changes in consumer preferences in a concentrated region. While operating margins have significantly improved over the past year, they remain weak relative to other similarly rated apparel peers, and it will take additional time to prove that turnaround efforts will have a sustained positive effect.

From a sourcing standpoint, about 50% of Under Armour's product comes from the Asia Pacific, about 25% from the Middle East and Europe, and another 25% from Latin American countries.

Several major brands last year experienced challenges in China after they expressed concerns related to accusations of forced labor in the Xinjiang territory. Nike, H&M, Burberry and Calvin Klein were among those who promised to stop buying cotton from sources in Xinjiang.

The Chinese government refuted the accusations and urged citizens to boycott the brands. There have been ongoing questions about whether the growth of sportswear brands in China is permanently impaired. Under Armour could be more insulated from the risk than other brands because it has lower revenue exposure to the region and did not release a statement regarding its stance on sourcing from the Xinjiang region.

The plan combined with recovery from the COVID pandemic has improved Under Armour’s cash flow. The company has increased earnings over the last twelve months. Executives used the additional cash flow to pay down debt and decrease interest payments significantly over the past few quarters. These moves could be a positive sign of things to come for the stock.

The company states that the restructuring costs should be completed by the first quarter in 2022. That reduction in cost alone should begin to show great benefit for the non-adjusted EPS.

Over the last several years, the athletic clothing market has added fuel to Under Armour’s sales growth. First, workers took advantage of dress codes that have relaxed over several years. After that, COVID-19 forced many employees to work from home. And comfortable athletic clothing became the new status quo. Analysts project that the global athletic apparel market will grow to over $221 billion by 2026.

In the past, Under Armour mostly sold athletic shoes like basketball, baseball, football, soccer, and running shoes. The growing popularity of sports worldwide has provided growth for the entire athletic shoe industry.

In November 2020, Under Armour launched the Curry Brand with long-time brand partner Steph Curry. That was a key step to rival Nike’s Air Jordan franchise. Furthermore, the company has increased sales every year for the last ten years, except 2020.

Under Armour's specialty fabrics are manufactured by a relatively small number of contracted sources that are in several different countries. The assembly of products is diversified among 50 primary manufacturers located in 18 countries with 10 manufacturers producing 57% of apparel and accessories in FY 20.

Apparently, the company has recognized a benefit in not depending too much on any one manufacturer or even one country for sourcing.

Under Armour is finding that in the current environment they can utilize pricing power, which may be a term that was not considered too much in this industry pre-pandemic. With less inventories and high consumer demand they can ask and receive higher prices for the available product.

In fact, they are finding similar abilities to charge more to third party off-price channels. With decreased inventories available at full prices, they are finding that off-price dealers are willing to pay more just to get the products. All this helps Under Armour's gross margins, and they believe the condition will exists for some time. 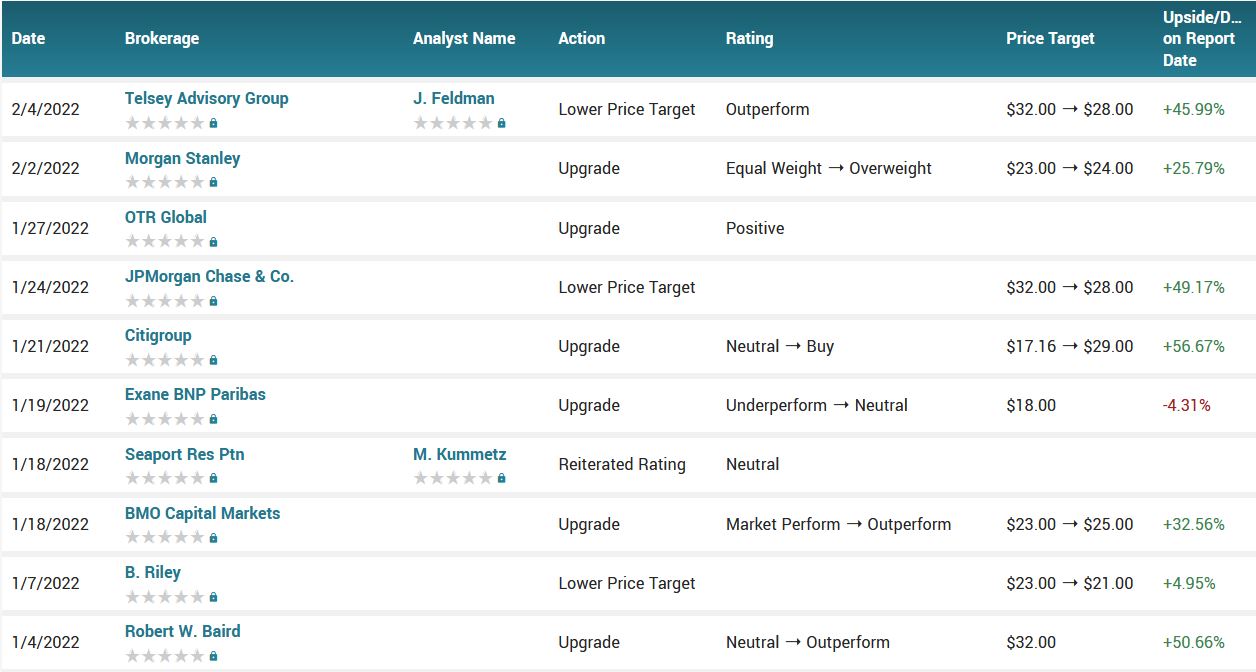 Under Armour experienced a slowdown in sales starting in the fourth quarter of 2016 after several years of high, double-digit growth. CEO Patrik Frisk has led the company through a multi-year restructuring process that has seen demand for the brand recover despite the ongoing pandemic.

Under Armour sees their success as coming from its brand image and recognition as well as quality of its products and marketing efforts. The company looks to grow its business by expanding off the current majority market in North America to more international sales. They see their direct-to-consumer channels helping to expedite this process. The company believes they will be able to utilize the methods they have used in the past, such as reaching out to athletes, to help grow sales in those new markets.

Under Armour continues to report strong results and they believe they will deliver a record year in revenue and EPS. Revenue gains were seen in apparel and footwear in both North America and internationally as well. Gross margin was strong at 51%, presumably bolstered by benefits from the restructuring plan. 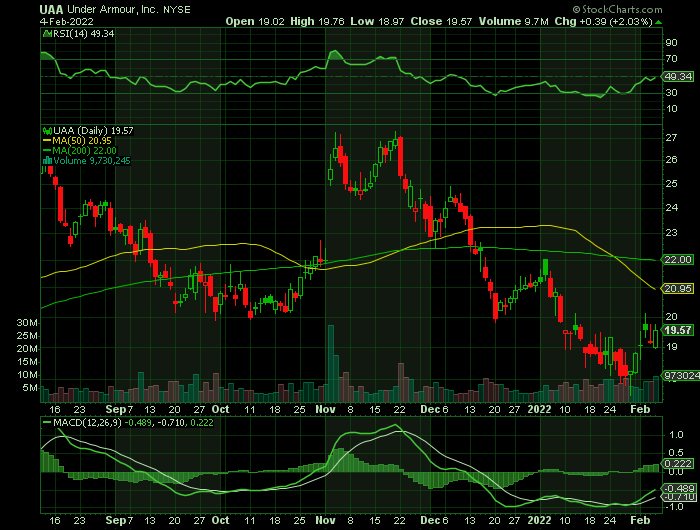 Under Armour Earnings CLICK HERE and join our membership.