And, Weekly Options” Members Profit Up 80% With A Put Option!
Further Downside Expected!

Twitter TWTR is down 9.4% from last Friday's close as the social media platform confronts a future without CEO Jack Dorsey at the helm.

While investors initially cheered the executive's departure as he announced his decision to focus more of his attention on his other business the market recoiled when Dorsey named his chosen successor, Chief Technology Officer Parag Agrawal.

And, “Weekly Options” Members Profit Up 48% using a Put Option! 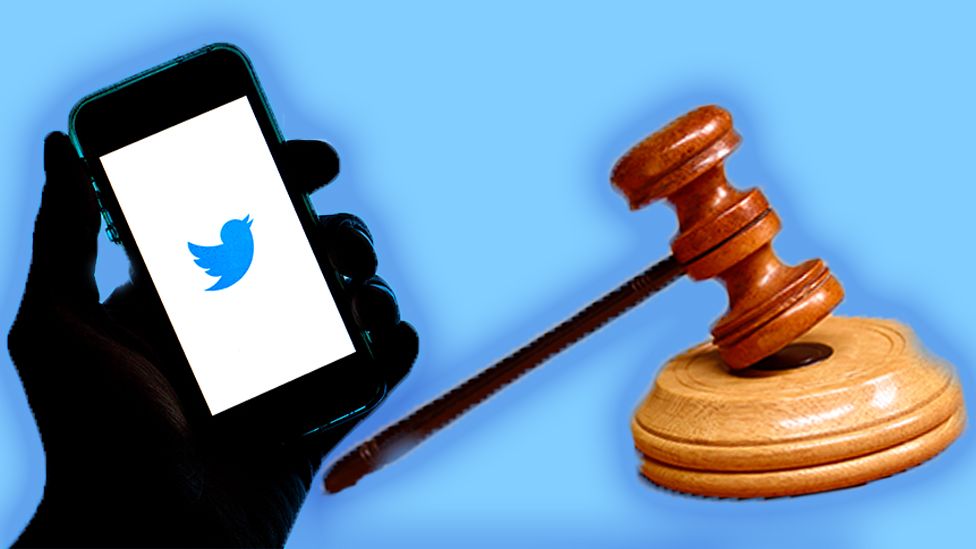 On Thursday, December 02, 2021, a Twitter TWTR Weekly Options Put trade was recommended to our members based on several catalysts.

Twitter TWTR is down 9.4% from last Friday's close as the social media platform confronts a future without CEO Jack Dorsey at the helm.

While investors initially cheered the executive's departure as he announced his decision to focus more of his attention on his other business the market recoiled when Dorsey named his chosen successor, Chief Technology Officer Parag Agrawal.

Twitter TWTR still has problems to contend with and the market is doubtful Agrawal is up to the task.

At a time when social media's importance is arguably at its apex, Dorsey's ineffectual leadership has ravaged investors. Now Twitter has a new executive with little to no experience in leading such a large, diverse platform who is tasked with turning it around.

It is very likely that a new Twitter TWTR Weekly Options Put trade, if recommended, will be also successful.

The interactive media sector, of large tech companies, Twitter Inc. (NYSE:TWTR), a global platform for public self-expression and conversation in real time, saw traders buy the rumor and sell the news on Monday, bidding up the stock to a 2-week high after reports that CEO Jack Dorsey would step down and dumping positions aggressively after he announced his immediate departure.

The selloff made perfect sense, with Chief Technology Officer Parag Agrawal taking the helm, raising fresh doubts about the company’s ability to translate eyeballs into profits.

Monday’s news that Jack Dorsey is stepping down as chief executive officer of the social media company comes after the stock rose just 63% during the co-founder’s six-year tenure. That’s a far cry from the multi-fold gains in peers such as Facebook-owner Meta Platforms Inc. or Amazon.com Inc. on the NYFANG+ Index.

Twitter topped out near 75 less than two months after coming public and entered a steep downtrend that bottomed out in the mid-teens in 2016. A 2017 uptrend stalled at the IPO opening print in 2018, yielding a secondary decline that posted a higher low during March 2020’s pandemic decline. The subsequent uptick mounted the 2013 high by 6 points before failing in March 2021, ahead of two-legged decline that’s now completed a double top breakdown, projecting downside to the 30 level.

Twitter, Inc. is a global platform for public self-expression and conversation in real time. It provides a network that connects users to people, information, ideas, opinions and news. The company's services include live commentary, live connections and live conversations. Its application provides social networking services and micro-blogging services through mobile devices and the Internet. The company can also be used as a marketing tool for businesses.

Its products and services include Promoted Tweets, Promoted Accounts and Promoted Trends.

The Major Catalysts for the TWITTER TWTR Weekly Options Trade…..

Public statements that cast doubt about Agrawal’s commitment to free speech emerged within hours of taking over, triggering waves of criticism on the platform while stoking fears the organization will develop new censorship tools to silence political opposition and debate about important issues like the pandemic, the economy, and social justice.

Dorsey is leaving behind a string of failed marketing initiatives, camouflaged by election and pandemic-driven user spikes.

Twitter stock has performed terribly since the 2013 initial public offering (IPO) and is now trading less than 3 points above the opening print in that session. Price action translates into an annual return of less than 35 cents per year, highlighting Dorsey’s weak management skills in a booming social media sector. The inexperienced Agrawal is unlikely to make headway on these challenges while he settles into his new position, generating even greater uncertainty for long-suffering shareholders.

Agrawal joined Twitter more than a decade ago as a software engineer and was appointed chief technology officer in October 2017.

He oversaw Twitter's technical strategy and was responsible for improving the pace of software development while advancing the use of machine learning across the company.

Since December 2019, Agrawal has also been working on Project Bluesky, an independent team of open-source architects, engineers and designers to combat abusive and misleading information on Twitter.

Responding to a question on protecting free speech and fighting misinformation in an interview with the MIT Technology Review in 2020, Agrawal said "our (Twitter's) role is not to be bound by the First Amendment, but our role is to serve a healthy public conversation and our moves are reflective of things that we believe lead to a healthier public conversation."

"We ought to break them up," Hawley said. "At the end of the day, here's the deal: The last thing America needs is another Big Tech robber baron that doesn't care anything for free speech, and that's exactly what Twitter is giving us."

"Let's just remember what Twitter does … to make their money. They track us around the web, everywhere they go, everywhere we go, they collect a dossier on us. They sell our information, they profit off of us. I promise you, they're not going to stop doing any of that stuff."

1)      Following Dorsey - Dorsey wrote in an email to Twitter staff that he is now leaving the company to ensure it “can break away from its founding and founders.” Now Agrawal will have the difficult task of proving to employees that he has the vision to take Twitter into its next stage.

That may not be easy. News of Dorsey’s departure reportedly sent shockwaves through Twitter’s staff, and a poll on the anonymous app Blind found that three-quarters of roughly 150 Twitter employees had their doubts about Agrawal.

2)      Meeting Growth Targets – Twitter exerts an outsize influence thanks to the high-profile politicians, celebrities, and members of the media who use the platform to share their unfiltered thoughts with the public. But it has a much smaller user base than competitors like Facebook, with 211 million daily active users compared to Facebook’s 1.9 billion. Following the Elliott Management deal in 2020, Twitter announced the ambitious new targets of growing its user base by 20% annually through 2023 and doubling its yearly revenue to $7.5 billion.

Now the company is betting on new products and features to entice new users and get others more engaged. Dorsey said earlier this year that he wanted to “double the number of features per employee that directly drive” growth in users or revenue. To that end, the company has been rolling out features this year that give users greater control over their privacy, and introduced a new paid product, Twitter Blue, that gives people the ability to customize the app to their liking, as well as the highly desirable power to undo a Tweet. (The feature allows users to delay publishing a tweet for a few moments, giving them time to claw it back rather than publishing and then hastily deleting it.)

This represents a notable pickup in pace for Twitter, which historically has been slow to roll out new products. It will be up to Agrawal to keep building on that momentum.

3)      Dealing with Misinformation - Under Dorsey, Twitter frequently came under criticism for misinformation and hate speech that has flourished on the platform. The company introduced new features in recent months aimed at helping to curb at least some of those issues.

Speaking with MIT Technology Review last year in his capacity as CTO, Agrawal said that Twitter’s responsibility did not lie in trying to distinguish between truth and falsehoods, and that removing content shouldn’t be a first resort.

But Agrawal also has acknowledged that relying on automation to flag misinformation means the company can be slow to react to the spread of fake news. “It takes us a while to develop a process to scale, to have automation to enforce the policy,” he said at a VentureBeat conference in July 2020. “I’m not proud that we missed a large amount of misinformation even where we have a policy because we haven’t been able to build these automated systems.”

“Whilst his last tweet (before resignation) declared his love for the platform, Jack Dorsey hasn’t exactly been the faithful type,” said AJ Bell analyst Danni Hewson, pointing to his other CEO role at Square Inc. “There were plenty of investors who wondered whether it would be better served by a new master. Today it has one and one that certainly knows the ropes.”

Also, Twitter had its price objective dropped by analysts at Citigroup from $60.00 to $47.00 in a research report issued to clients and investors on Wednesday. The brokerage presently has a “neutral” rating on the social networking company’s stock. Citigroup’s price target indicates a potential upside of 6.96% from the company’s current price. The analysts noted that the move was a valuation call.

Bloomberg Intelligence analyst Mandeep Singh said that while Dorsey’s time commitment with Square was likely a factor in Twitter’s lackluster performance, the company also struggled to find its groove in terms of execution. He said Twitter has lagged behind peers as social media has evolved, both on the product side as well as advertising infrastructure.

Singh doesn’t expect any drastic changes in how Twitter will think of its strategy as Agrawal takes the helm, given he was part of the company’s management team. He expects the user growth and revenue targets for 2023 have become harder to achieve in the near term as Agrawal may establish goals of his own. 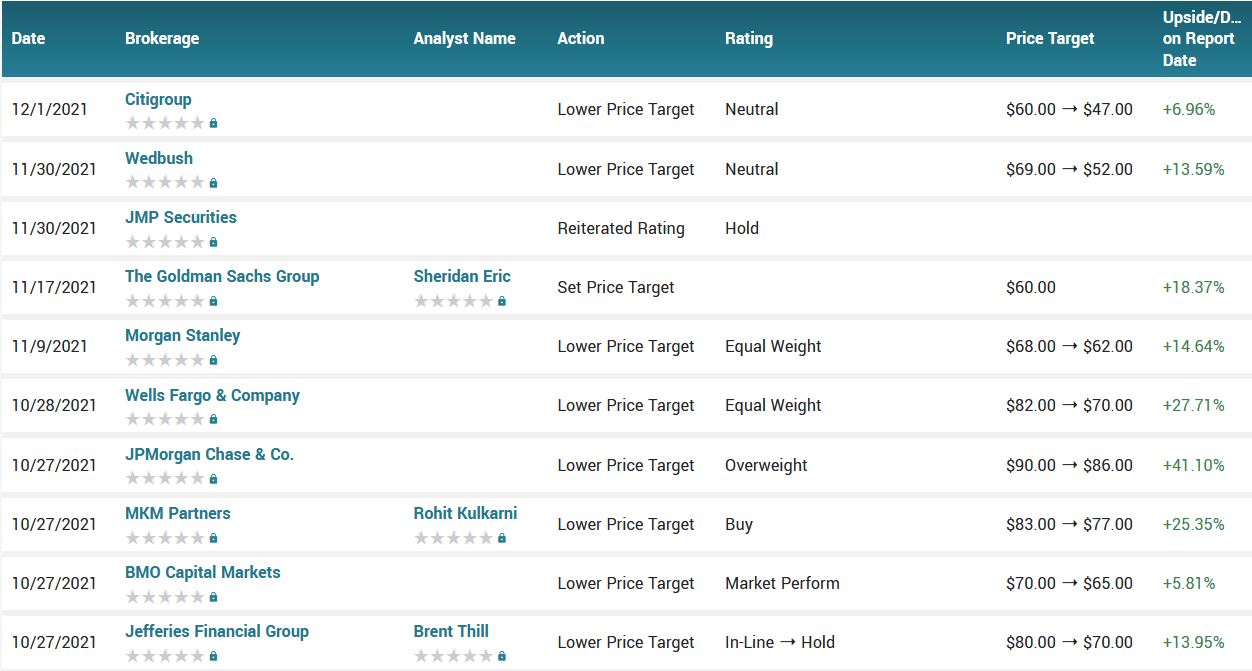 Wall Street consensus has deteriorated through 2021, now standing at a ‘Hold’ rating based upon 9 ‘Buy’, 1 ‘Overweight’, and 23 ‘Hold’ recommendations. In addition, five analysts are recommending that shareholders close positions and move to the sidelines. Price targets currently range from a low of $47 to a Street-high $86.

From Elon Musk’s Tesla Inc. to Reed Hastings’ Netflix Inc., tech firms led by their founder have mostly beaten the broader market by a huge margin. Twitter Inc. has always been an outlier.

The Twitter TWTR Weekly Options Trade Has Been A Big Winner!

What Further Twitter TWTR Weekly Trades Will We Recommend?

Back to Weekly Options USA Home Page from Twitter TWTR