Members of “Weekly Options USA,” Using A Weekly Call Option, Are Up 112%
Due To TOL Cutting Its Deliveries Outlook!
More to come?
Join Us and GET FUTURE TRADEs!

Toll Brothers shares fell after the homebuilder cut its deliveries outlook as the housing market cools.

Now, analysts covering the stock delivered a dose of negativity to shareholders by making a substantial revision to their statutory forecasts for next year.

This set the scene for Weekly Options USA Members to profit by 112% using a Weekly Put Option!

Why the Profit on Toll Brothers Stock?

The analysts covering Toll Brothers delivered a dose of negativity to shareholders by making a substantial revision to their statutory forecasts for next year. Both revenue and earnings per share (EPS) estimates were cut sharply as analysts factored in the latest outlook for the business, concluding that they were too optimistic previously.

The biggest issue in the new estimates is that analysts have reduced their earnings per share estimates, suggesting business headwinds lay ahead for Toll Brothers. Regrettably, they also downgraded their revenue estimates, and the latest forecasts imply the business will grow sales slower than the wider market.

Also, rising interest rates are thwarting the U.S. housing market's momentum, hammering many stocks tied to the fortunes in the sector.

Toll Brothers came out with quarterly earnings of $2.35 per share, beating the Consensus Estimate of $2.30 per share. This compares to earnings of $1.87 per share a year ago. These figures are adjusted for non-recurring items.

However, for the three months through July, signed purchase contracts tumbled 60% from a year earlier to 1,266, according to a statement Tuesday. Analysts were expecting 2,568. The company said it expects to deliver 10,000 to 10,300 homes in its full fiscal year, down from a previous estimate of 11,000 to 11,500 homes.

After a pandemic sales rush, US builders are facing plummeting demand, with purchases of new homes in July falling to the slowest pace since 2016, according to the latest government data. The slump is pushing many companies to offer discounts and other buyer incentives to avoid a pileup of inventory.

Toll’s customers are mostly move-up buyers who can afford houses selling at an average price of about $1 million. Still, mortgage rates that have almost doubled since the start of the year have cut into their purchasing power, while slowing sales of existing homes have made it harder for potential buyers to trade up.

For Toll, the full impact of the slowdown is likely to stretch into 2023 because the company’s homes take longer to build, Bloomberg Industries analyst Drew Reading said after the results were announced.

“The move-up market will continue to face unique challenges as current homeowners are less inclined to trade up due to massive home-price gains and the likelihood they carry a significantly lower rate on their current mortgage,” Reading said in an email. “The higher end of the market also tends to be more discretionary, which means ongoing volatility in the stock market could remain an overhang.”

Toll Brothers, Inc., together with its subsidiaries, designs, builds, markets, sells, and arranges finance for a range of detached and attached homes in luxury residential communities in the United States.

The company serves move-up, empty-nester, active-adult, and second-home buyers. It has a strategic partnership with Equity Residential to develop new rental apartment communities in the United States markets.

The company was founded in 1967 and is headquartered in Fort Washington, Pennsylvania.

The company said it was also hampered in its fiscal third quarter by “unforeseen delays” with municipal inspectors, continued labor shortages and supply-chain disruptions.

As the quarter progressed, “we saw a significant decline in demand as the combined impact of sharply rising mortgage rates, higher home prices, stock market volatility and macroeconomic uncertainty caused many prospective buyers to step to the sidelines,” Chief Executive Officer Douglas Yearley said in the statement. “However, in more recent weeks, we have seen signs of increased demand as sentiment are improving and buyers are returning to the market.”

The company reported an adjusted home sales gross margin of 27.9%, compared with 25.6% a year earlier. That helped boost earnings per share to $2.35 from $1.87 a year earlier, beating the consensus estimate of $2.31. 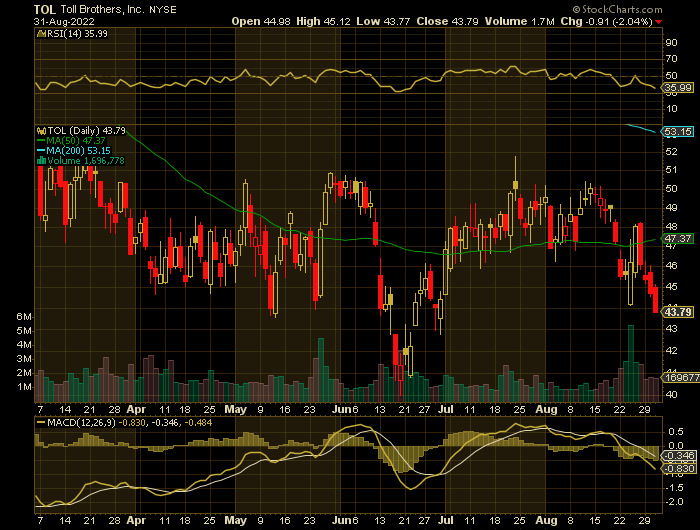 Back to Weekly Options USA Home Page from Toll Brothers