and, “Weekly Options USA” Members are Up 75% Using A Weekly call Option!
More Profit Is Expected Before Expiry?
Don’t Miss Out!

Taiwan Semiconductor TSM shares are trading higher this week, getting a boost from Morgan Stanley analyst Charlie Chan, who sees a “a very positive longer-term outlook.”

And, “Weekly Options USA” Members, Were Up 75% Using A Weekly Call Option!

More Profit Is Expected Before Expiry?

Taiwan Semiconductor TSM Mfg. Co. Ltd. (ADR)(NYSE: TSM) shares are trading higher this week, getting a boost from Morgan Stanley analyst Charlie Chan, who lifted his rating on the contract-chip-manufacturing giant to Overweight from Equal Weight, seeing a “a very positive longer-term outlook.”

Chan cautions that in 2022, “a semi downcycle is emerging,” pointing to moderating consumer demand for personal computers, smartphones and televisions.

And, even after the pullback in the overall market Taiwan Semiconductor TSM stock bucked the downturn to remain positive and even advance higher.

At the time of writing the stock was defying the odds and was in the green.

As some members may be still holding for higher profits the actual details of the trade cannot be forthcoming as yet.

The Influencing Factors For A Successful Taiwan Semiconductor TSM Trade…..

His initial rating was in anticipation of the semi-downcycle that is now unfolding.

While recognizing short-term challenges, several factors have prompted him to look beyond the current correction to what he sees as "a very positive longer-term outlook."

The European Union announced a blueprint on Tuesday to make one-fifth of the world's microchips, saying it was "open for business" to semiconductor giants from Taiwan and other industry leaders.

The European Chips Act provides at least €42 billion (US$48 billion) by 2030 in public and private sector capital behind an ambitious plan to effectively double the bloc's chip production, to 20 per cent of the global supply of semiconductors, the tiny processing units that will power the industries of the future.

Currently, the bloc produces 10 per cent of the world's supply, few of which are considered to be cutting-edge.

Margrethe Vestager, the EU's competition tsar, said that the bloc is already in talks with Taiwan Semiconductor TSM, a market leader.

"I know that some of the discussions taking place that include Taiwan Semiconductor TSM of Taiwan. And now let's see if those projects, they materialise as well. Europe is open for business, also for Taiwan Semiconductor TSM," Vestager said, adding that the companies in the United States, Japan, South Korea and Singapore were "like-minded partners" the EU would work with.

The Taiwan government is in talks with its Lithuanian counterparts about building a manufacturing facility there, a senior diplomat said - part of a blossoming relationship that has angered China.

"Well, at the government level, we are only helping Lithuania. I think this is the first case but we would like to provide assistance for other European countries," Eric Huang, head of the Taiwanese Representative Office in Vilnius, told the South China Morning Post.

Huang said that Taipei has formed an "expert group" to examine the "most feasible way" to help develop a tech ecosystem in Lithuania, and subsequently Europe.

"This is something that we would like to do intelligently because we want it to be a successful case. After the study of our expert groups we are going to understand which are the most feasible sectors for Lithuania to develop is semiconductor industry," Huang said.

Brussels, too, has been keen to draw on Taiwan's expertise in the sector, although it faces a challenge in managing the geopolitical fallout with China.

Late last year it shelved plans to upgrade its trade ties with Taiwan, for fear of further angering China.

TSMC reported its fourth-quarter earnings before the U.S. markets opened on Thursday, December 13, 2022, before the market opened, and they were good: TSMC earned $1.15 per share on $15.74 billion in revenue, up 6.4% and 5.7%, respectively, from the third quarter -- and both above Wall Street's estimates.

The company's sales in that quarter rose across the board, with increased demand for chips for smartphones, high-performance computing, internet of things, e-vehicles and various consumer electronics.

Smartphone chips accounted for 44% of Taiwan Semi's revenue in the December quarter. High-performance computing chips made up 37% of revenue in the period. 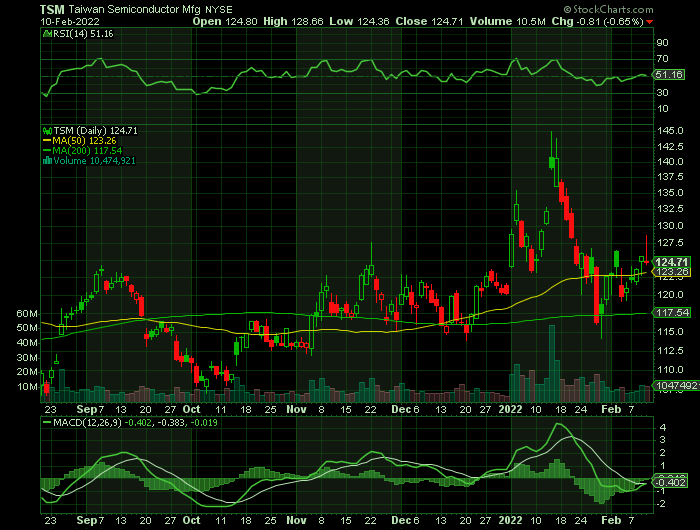 Don’t Miss Out On The Continued Stock Movement Of Taiwan Semiconductor TSM!

What Further Taiwan Semiconductor TSM Weekly Trades Will We Recommend?