but, “Weekly Options” Members are Up 130% Using A Weekly put Option!
Can More Profit Be Expected?
Don’t Miss Out On Further Profit!

But, “Weekly Options USA” Members, Are Up 130% after executing a Weekly Put Option!

Can More Profit Be Expected?

Robinhood Markets Inc (NASDAQ: HOOD) stock has continued to slide due to the bloodbath occurring in the cryptocurrency market. As well, shares of the company, which went public last year, slid further Thursday to new all-time lows before bouncing after missing Wall Street analysts' estimates.

Robinhood stock is still down more than 25% already this year and is about 85% below its record high.

Bitcoin prices, which have started to rebound slightly Moday, had dropped nearly 25% this year and are about 50% below their all-time high from November. That hurts companies like Robinhood Markets which allow traders to buy and sell bitcoin, ethereum and other digital currencies.

Other stocks with ties to cryptocurrencies, such as Square owner Block, Elon Musk's Tesla and software firm MicroStrategy, run by uber-crypto bull Michael Saylor, have all fallen and are off to an abysmal start to 2022 as well.

But the broader market volatility is doubly bad for Robinhood Markets, given that it is primarily known as an app for trading stocks.

But Members Profit More Than 130% in the past week on the Robinhood Markets Trade.....

Why The Profit Was Achieved on Robinhood Markets?

Shares of  Robinhood Markets, the disruptive financial brokerage targeting millennials and Gen Z, opened 14% lower Friday after reporting fourth-quarter revenue on Thursday which missed Wall Street analysts' estimates. The company's revenue outlook for the current quarter also came in below expectations. Shares of the commission-fee trading platform declined around 10% in after-hours on Thursday.

The company's revenue outlook for the first quarter of this year also came in below expectations. Robinhood forecasts revenue of $340 million, while Wall Street was projecting $447 million.

On July 28, Robinhood Markets priced 55 million shares at $38 a share, raising $2.1 billion. But the pricing came in at the low end of its expected range. The stock closed the day at 34.82, more than 8% below the IPO price.

The company is known for pioneering commission-free stock trading with no account minimums. The platform allows users to make unlimited commission-free trades in stocks, exchange-traded funds, options and cryptocurrencies. Robinhood ranked among the best online stock brokers in 2021 for Mobile Trading Platforms/Apps and Margin Investing/Interest Rate.

The app is popular among young and first-time investors and traders. Millions of young investors flocked to Robinhood during the meme-stocks trading mania for stocks  like GameStop (GME) and AMC Entertainment (AMC). Excitement around cryptocurrencies like Bitcoin also fueled interest in the app.

"While we are only six years into our journey, we have already seen profound transformations in how people think about their money," Chief Executive Vlad Tenev and Chief Creative Officer Baiju Bhatt said in written remarks with the Robinhood IPO filing.

"The next generation of investors is younger and more diverse than ever before and finance is now as culturally relevant as music and the arts," the executives said.

The Major Catalysts for the ROBINHOOD MARKETS Weekly Options Trade….

Robinhood Markets was just one of many companies that saw their shares hit hard in early trading on Monday. Traders and investors are concerned about higher interest rates, which now seem likely amid the highest inflation in years. The U.S. Federal Reserve will begin a two-day meeting on Tuesday that could end with a signal that rates will begin rising as soon as March.

Robinhood Markets will release its fourth-quarter 2021 earnings on January 27.

Given that it's an online trading platform, the majority of Robinhood's revenues come from trade-related transactions. As a result, more monthly users equal more trading activity on the platform, which implies more transaction revenues for Robinhood. For Robinhood, transaction-based revenues are fees gained by routing customer orders for stocks, options, or cryptocurrency to other brokers.

Robinhood's website traffic increased in the most recent Q4 quarter, earnings from which have yet to be published. To put things into perspective, total unique visits to Robinhood increased by 18.7% year-over-year to 35.9 million. The increase in visits reflects that Robinhood Markets may be able to deliver good year-over-year top-line results in the Q4 quarter.

However, the data for monthly visitors to Robinhood.com are not particularly encouraging for the month of December. While the company's projected monthly visitation climbed by 0.7% in November, it fell by 17.7% quarter-over-quarter to 10.5 million users in December.

It’s not all about the figures in the sales. But the reaction can come from what management says about the future. What Wall Street wants to hear is that they are coming into their own. Management also needs to lay out the path forward into a better prosperity. Nobody wants to invest in a stock that has dwindling growth trends, especially a young company like this.

The Dow Jones Industrial Average at one point fell more than 860 points in Monday's session, as traders fretted about the outcome of the Fed meeting on Wednesday. Worries on earnings out of Tesla and Apple this week — and the precarious situation between Russia and Ukraine — is also hurting sentiment for stocks.

The S&P 500 slipped into correction early on in the session, defined as a 10% decline from a recent high.

"It certainly is a plethora of pain for investors this morning. I would be very hesitant of getting in or adding positions in just about anything before we hear from an increasingly hawkish Federal Reserve on Wednesday," said The Strategic Funds managing director Marc LoPresti on Yahoo Finance Live.

Recent sell-offs in tech stocks are mostly tied to inflation, which is at a 40-year high. To prevent a dizzying rise in prices from doing damage to the economy, the Federal Reserve has hinted that it would start raising interest rates this year, and analysts expect the institution to do it at least three times this year, starting in March.

The prospect of better and higher returns on investment from assets judged to be low-risk makes investors less inclined to buy technology stocks that sell promises.

Out of the pandemic, we saw a new breed of traders using the Robinhood Markets platform. Those profits have vanished in the last few months as the Russell 2000 crashed from its highs. With it Robinhood’s stock came down hard. Now it cannot find its footing.

Robinhood Markets won’t share data on actual performance of its customers, but Noah Weidner, writer of the Business As Usual newsletter and now a member of the editorial team at Stocktwit, shows calculations that crowd-following behavior helped them and then hurt them.

The latter outcome was baked into their behavior as influenced by the investing app, according to an academic paper by Brad Barber, Terrance Odean, Xing Huang and Chris Schwarz. They note that inexperienced investors are more likely to be influenced by what they see others doing and that Robinhood’s “Top Movers” are traded disproportionately. And, because trading is so frictionless on the app, they tend not to rely on critical thinking as much as more seasoned investors. They also trade frequently—about 40 times as much per dollar in their accounts compared with a customer of Charles Schwab based on data from early 2020. 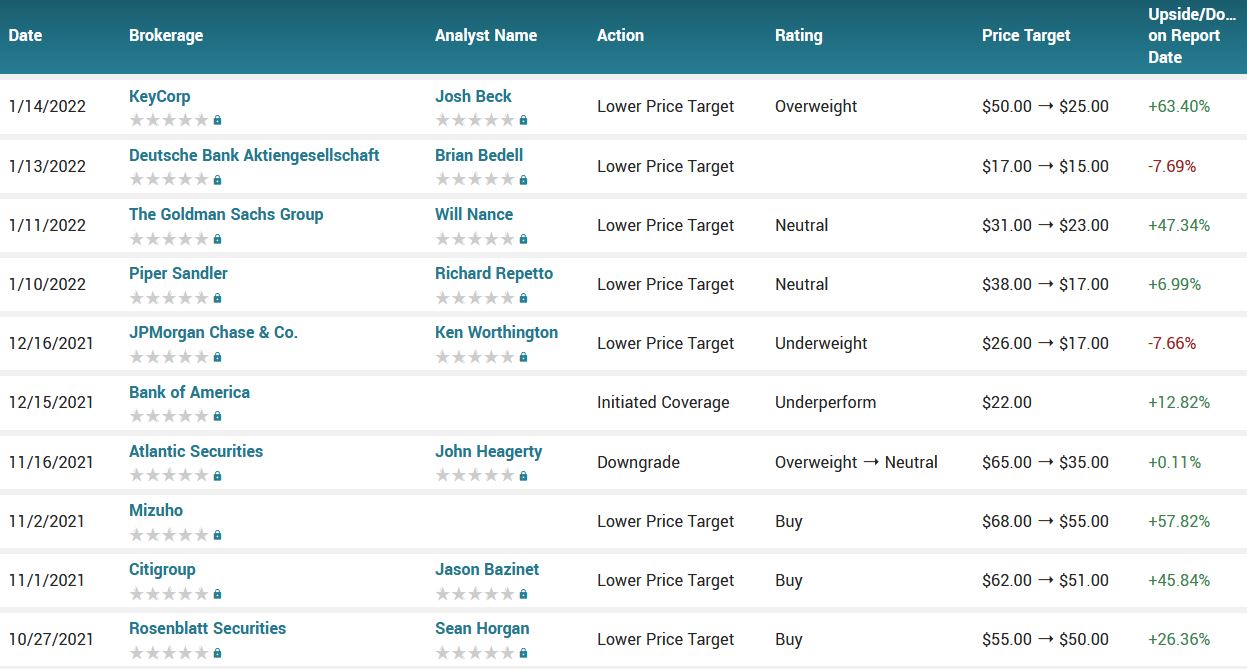 The website traffic numbers for Robinhood do not appear to be very impressive for Q4. In addition, the business cautioned during its Q3 earnings conference that seasonal headwinds and lower trading activity might harm the company's fourth-quarter results. The prediction appears to be coming true.

Robinhood still has a substantially large membership; their profit and loss statement is too young to lend any stock support. Total revenues fell dramatically in the third quarter of 2021. This is a concern, because if that happens again, the selling will continue.

Despite an overall disappointing report from Robinhood, the stock was well into positive territory by late morning Friday based on unclear factors, but maybe due to.....

However, there's still a lot of uncertainty for the stock! 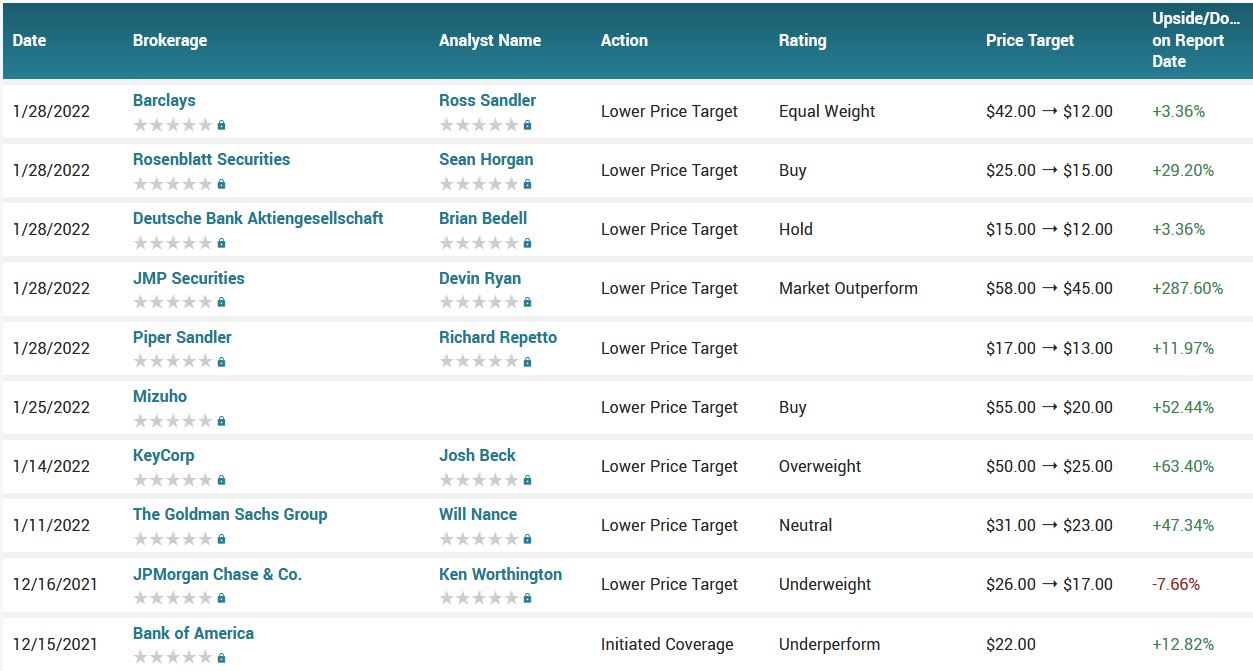 What Further Robinhood Markets Weekly Trades Will We Recommend? 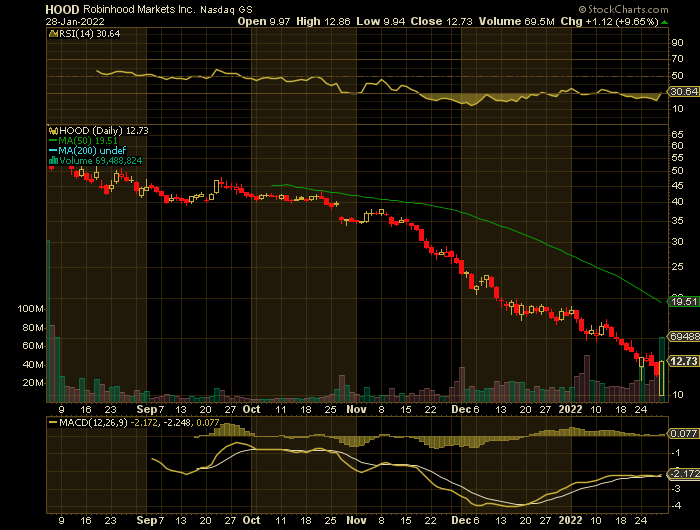 Back to Weekly Options USA Home Page from Robinhood Markets