Members of “Weekly Options USA,” Using A Weekly Option, Already MaDe 183% Potential Profit!
More is likely - Join Us and GET THE TRADEs!

Nvidia Earnings will be reported on May 25, after the market closes. The report will be for the fiscal Quarter ending Apr 2022.

Based on 11 analysts' forecasts, the consensus EPS forecast for the quarter is $1.09. The reported EPS for the same quarter last year was $0.78.

“I still think the worst is not behind us,” said Savita Subramanian, head of US equity and quantitative strategy at Bank of America Corp., on Friday. “There’s a pervasive fog of negative sentiment out there.”

Nvidia earnings will likely be caught up in a fresh slump in the world’s most-watched stock indexes, as economic growth fears spiral and the Federal Reserve embarks on its biggest policy-tightening campaign in decades.

Last week we saw the S&P 500 flirting with a bear market and notching more than $1 trillion in losses. This is likely to continue this week with NVIDIA earnings report, as well as reports from well-known retailers including Dollar General Corp., Best Buy Co Inc., Macy’s Inc. and Costco Wholesale Corp., still to come.

The Fed’s hawkish-at-all-costs posture, the chaos in supply chains and intensifying threats to the business cycle are all undermining confidence in Corporate America’s profit machine, while equity valuations keep sinking.

“I still think the worst is not behind us,” said Savita Subramanian, head of US equity and quantitative strategy at Bank of America Corp., on Friday. “There’s a pervasive fog of negative sentiment out there.”

Volatility in consumer stocks reached levels not seen since the early days of the pandemic-driven rout as retailers from Walmart Inc. to Target Corp. cut their annual profit forecasts and stoked concern over the impact of rising inflation and the challenge to pass on higher costs to consumers.

Shares of NVIDIA Corporation (NASDAQ:NVDA) remain mired below the 50-day moving average as well the 200-day average. It also sits below a falling 21-day exponential moving average. The chip stock has erased all gains from a successful October breakout and has fallen near a 52-week low.

On a fundamental level, Nvidia earnings and sales are expected to keep growing, though at a less torrid pace than seen in recent years.

The chipmaker is expanding in growth areas, such as data centers, automated cars and cloud gaming. The adoption of metaverses and cryptocurrencies could further stoke demand for Nvidia chips.

NVDA is a top chip stock, but the semiconductor sector is badly lagging in recent weeks. NVDA stock remains below key support levels and has a lot of recovery work to do.

Nvidia earnings are due Wednesday but Susquehanna analyst Christopher Rolland cited declining selling prices for Nvidia's graphics processing units (GPUs) designed for playing video games on a PC, which presents near-term risk to one of Nvidia's largest sources of revenue.

NVIDIA Corporation was founded in 1993 and is headquartered in Santa Clara, California.

The Major Catalysts for the nvidia earnings Weekly Options Trade…..

NVIDIA Corporation is expected to report earnings on May 25, after the market closes. The report will be for the fiscal Quarter ending Apr 2022.

Based on 11 analysts' forecasts, the consensus EPS forecast for the quarter is $1.09. The reported EPS for the same quarter last year was $0.78.

In its latest quarter, Nvidia earnings leapt 70% year over year while sales climbed 53%. Both earnings and sales growth accelerated from the prior quarter.

For fiscal 2023, analysts expect EPS to jump 27% as revenue increases 29%. While strong, that would be well below the scorching pace of growth seen in 2021 and 2022. Both earnings and revenue are seen growing further in 2024, but at a slower double-digit pace.

News of slowing growth in China hurt Nvidia stock May 16. The company derives more than half its revenue from mainland China and Taiwan, according to FactSet.

"We believe order cancellations recently started in consumer GPUs, driven by excess inventories, a slowdown in consumer demand (reflected by an ongoing reduction in graphic cards pricing), slowdown in PC demand, and the Russia embargo," he warned. Gerra also believes demand has fallen in China.

Several reports have suggested weakness in PCs and consumer electronics amid high inflation.

Prices of Nvidia's GeForce RTX 30 series and Advanced Micro Devices' Radeon RX 6000 series had been trending up through 2021, but since the start of 2022, GPU prices have started to decline.

Nvidia might not substantially raise its financial forecasts or turn in higher earnings than expected for the first quarter due to weakness in its gaming-chip business, according to Susquehanna analyst Christopher Rolland.

The analyst, who lowered his price target on the stock, said the reopening of the economy, giving people more entertainment options, has led to a slowdown in the videogame-chip business. He said in a research note Wednesday that the mark up over the suggested retail price for Nvidia ’s cards has declined from a high of more than 130% in mid-2021 to over 78% in January, and 23% currently.

The analyst kept a positive rating on the stock but lowered his target for the price to $280 from $320.

The outlook for the gaming segment is less clear as businesses and economies start reopening, Rolland said. It “presents a potential intermediate-term narrative risk going into the quarter,” he wrote.

Rolland is not the first analyst to issue a warning over Nvidia's gaming segment. A few weeks ago, research analysts at Morgan Stanley also cautioned investors about a possible deceleration of growth in gaming.

It's worth noting that both Susquehanna and Morgan Stanley are bullish on Nvidia's long-term prospects. Plus, Nvidia shares have already fallen 50% from their all-time high of $346 in 2021. It seems investors were already expecting a slowdown in growth this year.

NVDA has nearly halved from its November 2021 peak. It tumbled in a broad tech-led sell-off that was sparked by fears about rising inflation and interest rates. 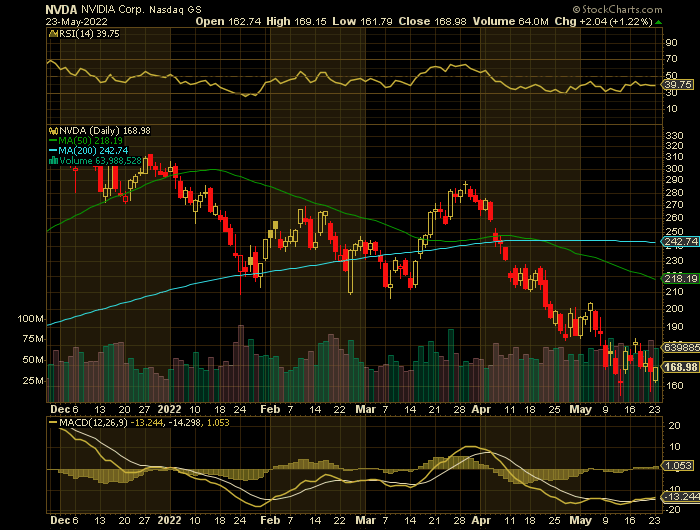