And Weekly Options Members executed 3 separate trades to gain a potential profit of 354%.

Is there more left to come? 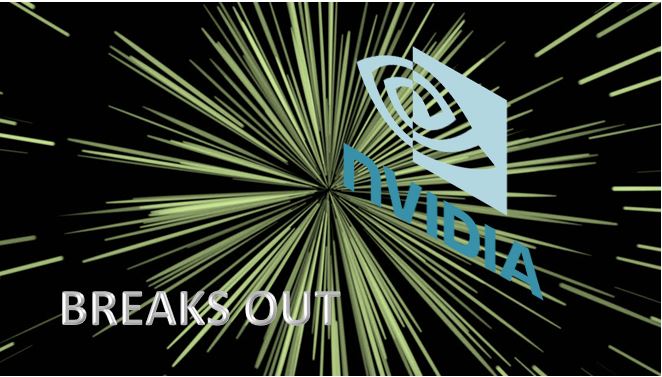 On Thursday, November 11, 2021, a NVIDIA Corporation Weekly Options trade was recommended to our members based on several catalysts.

NVIDIA Corporation stock closed out the trading day Thursday in top form, following its impressive Q3 earnings report on Wednesday. Shares of the chip maker ended the day up 8.25%, after jumping more than 10% at the open. The stock's performance comes after the company reported quarterly revenue jumped 50% year-over-year on the back of strong performances by its data center and gaming businesses in Q3.

Here are the most important numbers from the report compared to what Wall Street was expecting from the company.....

"The third quarter was outstanding, with record revenue,” Nvidia CEO Jensen Huang said in a statement. “Demand for NVIDIA AI is surging, driven by hyperscale and cloud scale-out, and broadening adoption by more than 25,000 companies. NVIDIA RTX has reinvented computer graphics with ray tracing and AI, and is the ideal upgrade for the large, growing market of gamers and creators, as well as designers and professionals building home workstations."

The company’s stock is up 125% year-to-date, and it’s fresh off of debuting new hardware and software related to its metaverse platform, called Omniverse, its self-driving vehicle initiatives, and its artificial intelligence work.

This trade could have been played out in three (3) separate parts…..

It is very likely that a new NVIDIA Corporation Weekly Options trade, if recommended, will be also successful.

NVIDIA Corporation is expected to report earnings on November 17, 2021 after the market closes. Nvidia is expected to deliver a year-over-year increase in earnings on higher revenues when it reports results for the quarter ended October 2021.

This maker of graphics chips for gaming and artificial intelligence is expected to post quarterly earnings of $1.11 per share in its upcoming report, which represents a year-over-year change of +52.1%.

For the last reported quarter, it was expected that NVIDIA Corporation would post earnings of $1.01 per share when it actually produced earnings of $1.04, delivering a surprise of +2.97%.

NVIDIA Corporation is launching new technology to expand its reach in the automotive industry, including a virtual driving assistant that can park a standard car and a system to speed up the training of autonomous vehicles.

As part of its fall new product event, centered around its "Omniverse" simulation technology, Nvidia Chief Executive Jensen Huang said the company will begin offering automakers a system called Drive Concierge. It uses Nvidia hardware and artificial intelligence software to provide a variety of services, including an autonomous driving function that allows a human-driven vehicle to park itself.

Another extension of the Omniverse strategy will be a system called "Omniverse Replicator" that will simplify and speed up the tasks required to create a virtual world for training automated vehicles.

NVIDIA Corporation, the world's biggest maker of graphics and artificial intelligence chips, has been pushing for years to expand technology originally developed for computer gaming and graphics into the auto industry.

Now, Nvidia is looking to capitalize on the intense competition among automakers to develop vehicles that can drive themselves and deliver sophisticated entertainment and information to the humans on board.

The firm is working to put high-powered chips and software into vehicles, and also sell technology that can create a highly detailed simulation of a factory to help manufacturers cut costs when building new plants, or an artificial universe for a robotaxi or self-driving truck to learn how to drive.

A number of automakers, including Daimler AG's Mercedes-Benz luxury vehicle brand, Volvo Car AB and Nio, have partnered with Nvidia to catch up with Tesla Inc's lead in software-driven features.

Mercedes and NVIDIA Corporation announced in June 2020 a partnership to develop a new generation of Mercedes vehicles with Nvidia's Nvidia Drive Orin AGX platform engineered in to provide autonomous driving and other functions. The first of those Mercedes vehicles is planned to launch in 2024.

With the additions of DRIVE Chauffeur, DRIVE Concierge and DRIVE Hyperion 8 at NVIDIA GTC, the company looks all-in on improving the safety, efficiency, and experience of driving in an autonomous vehicle. It isn't a single solution that radically changes the autonomous vehicle experience, but rather when you gather a combination of hardware and software solutions together to craft a better user experience. That is what NVIDIA is doing with its new announcements.

NVIDIA Corporation keeps adding more features and capabilities to its autonomous vehicle stack, and it's great to see. It is enabling autonomous vehicle developers with the hardware and software needed to develop future vehicles, and it takes a deep commitment and many dollars to do that.

NVIDIA Corporation also benefits by selling full-on supercomputers for AI applications, which can go for hundreds of thousands of dollars.

What’s more, NVIDIA Corporation benefits from largely working only with GPUs. Unlike AMD, it doesn’t sell both CPUs and GPUs, and unlike Intel, it isn’t reentering the discrete GPU market. The company is set to launch its own CPU code named Grace to ensure it can provide its customers with its own CPU — but so far it’s been able to focus all of its efforts on GPUs.

“Nvidia has had that part of the market to itself. It has the resources to invest into the markets, both gaming and the data center, which has helped it build its business,” Priestley said. “It has one product GPUs, basically.”

Luminar stock soared after the lidar startup won a deal with Nvidia that could bring driverless or self-driving cars to market faster.

That platform accelerates the "development of autonomous consumer vehicles with planned production starting in 2024," the release said.

Tuesday's release suggested the companies plan to license the technology to global automakers.

Lidars, or light detection and ranging systems, emit laser beams to help driverless or self-driving cars "see" objects on the road, even in poor light and weather, thus avoiding accidents.

Nvidia will use one forward-facing, long-range Luminar Iris lidar to enable highly autonomous driving on highways.

According to the chip giant, Luminar's automotive lidar hardware and software technology is both unique and scalable, making it a suitable complement for Nvidia's DRIVE Hyperion platform.

The company kicked off its 2021 GTC conference on Tuesday and Rosenblatt analyst Hans Mosesmann is effusive in his praise following CEO Jensen Huang’s keynote.

Huang made the bold claim that the company is basically the leader in “accelerated” computing, which is key to practically all AI/ML from now on in. Nvidia keeps on broadening its full stack coverage of the space, which now includes CUDA compiler technologies, accelerated specialized libraries, and a software suite that covers the entire data center “at scale.”

Jensen’s keynote also touched upon the company’s Omniverse platform, which forms the “structural foundation” for Meta’s Metaverse vision. And here Mosesmann doesn’t hold back either, noting Nvidia is “so, so far ahead of any chip company in virtual world dynamic it's not even close.”

While Jensen also announced the Quantum-2 networking platform which incorporates the Quantum 2 InfiniBand switch, Bluefield, and CX7 NICs (network interface cards), Mosesmann stresses that the main takeaway is that Nvidia’s announcements are “largely software-centric” which serve to make Nvidia’s existing hardware “so much more valuable.”

There’s no end to Mosesmann’s superlatives, who concludes, “Nvidia is a company that is moving into another level entirely that we see as moving more and more into a software IP-centric play.”

To this end, Mosesmann reiterated a Buy rating for the tech behemoth and attached a Street-high price target of $400. This implies upside of 35% from current levels.

As well, NVIDIA Corporation had its target price hoisted by equities researchers at Truist Securities from $257.00 to $360.00 in a report issued on Wednesday. The brokerage presently has a “buy” rating on the computer hardware maker’s stock. Truist Securities’ price target would suggest a potential upside of 20.24% from the company’s current price. 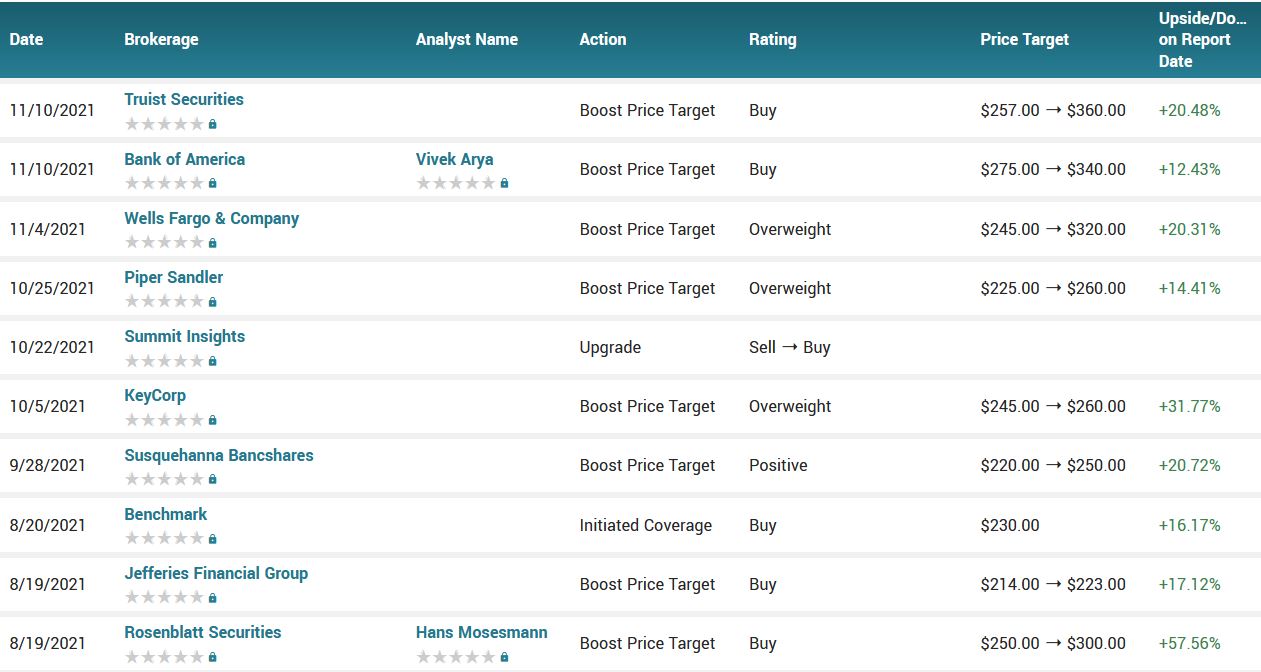 Nvidia’s market cap rose past the $800 billion mark after the company reported its third-quarter earnings. NVIDIA Corporation could be set to be the next trillion-dollar club. The chip manufacturer could join giants such as Tesla, Apple, Amazon and Microsoft in this category.

The chip manufacturer is one of the best-performing companies in the tech sector. Since the start of the year, NVIDIA Corporation has added more than 140% to its value. At press time, NVDA is trading at $315 per share.

If the stock continues with its recent performance, it could rally past the $350 level before the end of the year. This could see its market cap close in on the $1 trillion mark over the coming weeks and months.

The NVIDIA Corporation Weekly Options Trade Has Been A Big Winner!

What Further NVIDIA Corporation Weekly Trades Will We Recommend?

Back to Weekly Options USA Home Page from NVIDIA Corporation