Members of “Weekly Options USA,” Using A Weekly CALL Option,
Make 107% Potential Profit On The Day!
More to come?
Join Us and GET FUTURE TRADEs!

Shares of Nvidia NVDA surged higher Tuesday, jumping as much as 5.1%. A draft bill in the Senate aims to increase semiconductor manufacturing in the U.S., putting the country on a more even footing with China.

Why the Weekly Options Call Trade on NVDA

Major U.S. chip firms on Monday were coming around to support a package of chip industry subsidies.

Senate Majority Leader Chuck Schumer has told lawmakers that a vote could come as early as Tuesday on a slimmed-down set of bills to bolster the U.S. computer chip industry, after Democratic lawmakers cleaved them from a larger, more contentious bill.

The bills are aimed at making the U.S. more competitive against a rising China, whose chip industry has grown rapidly over the last five years to account for almost 10% of global sales.

The measures include $52 billion in subsidies and an investment tax credit to boost U.S. manufacturing. The bills have bipartisan support. Powerful Republican Senator John Cornyn on Sunday tweeted https://twitter.com/JohnCornyn/status/1548745290546544640 that proceedings on the bill have a "green light" after Democrats pared back their ambitions for unrelated spending bills.

AMD, Qualcomm and NVIDIA Corporation (NASDAQ:NVDA) design their own chips but tap partners to fabricate them and would see no direct benefit from subsidies to build plants or tax support for tools.

They support a separate version of the FABS Act introduced in the U.S. House of Representatives that contains both the manufacturing tax credit and a tax credit for chip design activities that would directly benefit them.

That version of the FABS Act - which is more pleasing to a broader swather of chip industry players - is also the one the Semiconductor Industry Association, which represents U.S. chip firms, had called on lawmakers to pass.

“We're encouraged that the legislation is progressing, and we continue to support enactment of $52 billion in CHIPS Act investments and a FABS Act investment tax credit for both manufacturing and design," the association said in a statement on Friday.

As a leading manufacturer of graphics cards, NVIDIA NVDA shares have had a solid bull run over the past decade. But that rally came to an abrupt stop towards the end of 2021. In 2022, the stock has fallen about 47%.

Nvidia’s plunge is substantial even when compared to other beaten-down stocks in the semiconductor sector.

NVDA, though, is doing well, making the stock a particularly intriguing contrarian idea. The NVDA chipmaker generated $8.29 billion of revenue in its fiscal Q1.

This options trade comes at an interesting time. The Senate is expected to vote on a bipartisan competition bill that includes a $52 billion subsidy for domestic chipmakers. Voting could begin as early as today. 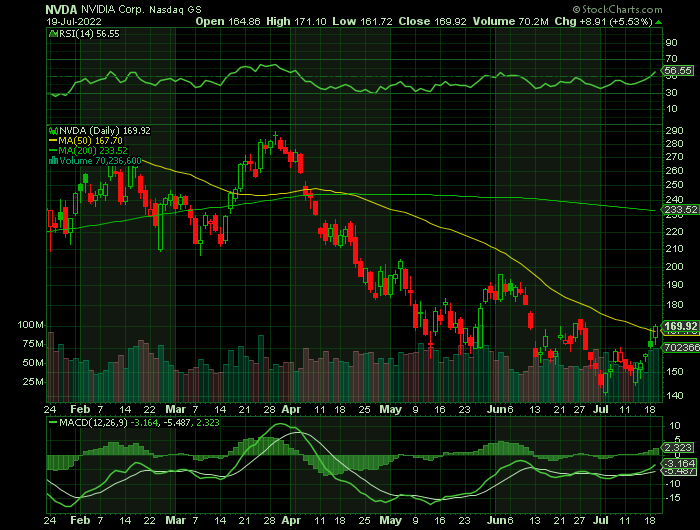 Back to Weekly Options USA Home Page from NVDA