Members of “Weekly Options USA,” Using A Weekly put Option,
Are Up 56% Due To a UBS analyst downgrade on NSC shares to Neutral from Buy.

Norfolk Southern Corp downgraded by analysts at UBS from Buy to Neutral, as well as cutting the price target to $229 from $282 per share.

This set the scene for Weekly Options USA Members to profit by 56%, within a couple of days, using a Weekly Put Option!

Why the Profit on Norfolk Southern Corp?

In a note on U.S. railroad stocks, a UBS analyst downgraded shares of Norfolk Southern Corp (NYSE: NSC) to Neutral from Buy.

UBS also cut the price target of Norfolk Southern Corporation to $229 from $282 per share.

The analyst told investors in a note that with the macro backdrop deteriorating, consensus 2023 estimates appear too high for U.S. rails and they expect downward revisions from industrial-related and intermodal volume assumptions in the near term.

"While a significant decline in freight demand would likely alleviate existing capacity constraints and lead to the improved service levels needed for rails to regain share from truck, we believe it will be difficult for the U.S.rails to achieve 2.5% volume growth currently reflected in consensus," explained the analyst. "We are cutting 2023E EPS by 10% for NSC."

Later in the note, the analyst explained that they prefer Canadian rails over U.S. rails on idiosyncratic drivers.

Shares of transportation companies are falling twice as fast as the hard-hit U.S. stock market, reflecting investors’ expectations that a recession is likely ahead.

The Dow Jones Transportation Average, which tracks 20 large U.S. companies ranging from airlines to railroads to truckers, has declined 12% this month. The S&P 500 and the Dow Jones Industrial Average are down about half that much.

Historically, declines in transportation stocks have indicated rough economic times ahead amid lower demand for goods, materials and travel—which is widely expected as a result of the Federal Reserve’s most aggressive tightening cycle in decades.

“That’s a confirmation we’re headed for a recession,” Peter Cardillo, chief market economist at Spartan Capital, said of the downturn in transport stocks. Mr. Cardillo forecasts there will be a mild global recession at the end of this year, lasting until the second quarter of 2023.

The transport index is on pace for the largest monthly percentage decline since March 2020, when pandemic-driven restrictions and lockdowns halted travel and disrupted global supply chains. It is down 26% this year and trading at its lowest level since late January 2021.

Obviously the results will vary from trader to trader depending on entry cost and exit price that was undertaken. Some traders will probably still be holding!

Norfolk Southern Corporation, together with its subsidiaries, engages in the rail transportation of raw materials, intermediate products, and finished goods in the United States.

As of December 31, 2021, the company operated approximately 19,300 route miles in 22 states and the District of Columbia. Norfolk Southern Corporation was incorporated in 1980 and is based in Atlanta, Georgia.

Wall Street has slid deeper into a bear market, with the S&P 500 and Dow closing lower as investors fretted that the Federal Reserve's aggressive campaign against inflation could throw the U.S. economy into a sharp downturn.

After two weeks of mostly steady losses on the U.S. stock market, the Dow Jones Industrial Average confirmed it has been in a bear market since early January. The S&P 500 index confirmed in June it was in a bear market, and on Monday it ended the session below its mid-June closing low, extending this year's overall selloff.

With the Fed signaling last Wednesday that high interest rates could last through 2023, the S&P 500 has relinquished the last of its gains made in a summer rally.

Confidence among stock traders was also shaken by dramatic moves in the global foreign exchange market as sterling hit an all-time low on worries that the new British government's fiscal plan released Friday threatened to stretch the country's finances.

That added an extra layer of volatility to markets, where investors are worried about a global recession amid decades-high inflation. The CBOE Volatility index, hovered near three-month highs.

After a grisly 1H22 which represented the stock market’s worst performance since 1970, the second half is shaping up to be a bit of a disappointment too. After clawing back some of the losses, it’s been onto the slide again with the S&P 500 almost back to the mid-June lows.

The bad news, according to billionaire investor Carl Icahn, is that things could still get worse from here.

“I think a lot of things are cheap, and they’re going to get cheaper,” said Icahn, pointing to the economic malaise, and laying the blame squarely at the Fed’s feet, whose years-long fast and easy monetary policy Icahn see as the main reason behind 2022’s rampant inflation.

"We printed up too much money, and just thought the party would never end," he went on to say before announcing that the “party's over now.” For most, for sure, but it looks like Icahn’s nous has kept him way ahead of the pack this year too. Throughout the first six months of 2022, Icahn Enterprises’ net asset value rose by 30%.

Britain’s currency is in trouble—and things could still get a lot worse for sterling, experts warn.

The British pound crashed to an all-time low below $1.05 during early trade on Monday, before recouping some of its losses to trade around $1.07.

Britain’s ailing currency, which had already fallen to a 37-year low earlier this month, continued its downward slide on Friday after newly appointed Finance Minister Kwasi Kwarteng unveiled the country’s biggest package of tax cuts in half a century.

The planned overhaul includes cuts to the amount of income tax the U.K.’s wealthiest pay, a cancellation of planned corporation tax rises and a scaling back of stamp duty—a tax people in Britain pay when they buy a home.

The tax cuts are expected to cost around £45 billion ($48 billion) by 2026, adding to the estimated $60 billion the government is set to spend on a national energy bills bailout over the winter.

The pound's plunge deepened further after Kwarteng doubled down on the tax cuts, telling the BBC Sunday that there was “more to come”.

The S&P 500 fell to its lowest level in almost two years on Tuesday on worries about super aggressive Federal Reserve policy tightening, trading under its June trough and leaving investors appraising how much further stocks would have to fall before stabilizing.

Stocks have been under pressure since late August after comments and aggressive actions by the U.S. Federal Reserve signaled the central bank's top priority is to stamp out high inflation even at the risk of putting the economy into a recession.

After the benchmark index fell more than 20% from its early January high to a low on June 16, which confirmed that the retreat was indeed a bear market, the S&P then rallied into mid-August before running out of gas.

"I think this will be a bear market with a recession," Stovall said. "Bear markets with recessions have ended up being deeper and lasting longer than those without a recession, with the average decline being 35%. So I think we will probably end up seeing this bear market bottom around 3,200."

Stovall's prediction would mark another 14% decline in the S&P 500 from current levels. And if hit, that would represent an approximate 33% drop from the Jan. 3, 2022 record high — roughly in line with the long-term averages seen during a recession called out by Stovall.

The markets sure look ugly these days.

"Rich Dad Poor Dad" author Robert Kiyosaki, who previously sounded the alarm, stresses just how badly this downturn could turn out to be.

“This is going to be the biggest crash in world history, we’ve never had this much debt pumped up,” he says in a Kitco News interview earlier this month.

Given that Kiyosaki has previously tweeted that “Crashes are the best times to get rich,” one might think it’s time to look for bargains in the beaten-down stock market.

But that’s not what Kiyosaki is doing right now.

The Federal Reserve will hike its key interest rate to a much higher peak than predicted two weeks ago and the risks are skewed towards an even higher terminal rate, according to economists polled by Reuters.

That change in expectations came after the Fed raised rates by 75 basis points last week for the third straight meeting and foresaw going higher than it had previously thought to tame inflation, which is running over four times above target.

Since then, already battered global stocks went much deeper into bear market territory - a decline of 20% or more - on fears of recession and most currencies weakened further against the multi-decade high dollar.

But that is unlikely to push the Fed to switch its policy path anytime soon as Fed Chair Jerome Powell and other policymakers have remained blunt about the "pain" to come.

Indeed, over 70% of economists, 59 of 83, predicted the central bank would hike its fed funds rate by three-quarters of a percentage point for the fourth straight meeting in November, a Reuters poll taken after the Fed meeting last week showed.

If realized, that would be the highest rate since early 2008, before the worst of the global financial crisis, and 75 basis points higher than 3.50%-3.75% predicted just two weeks ago.

Corporate insiders own 0.31% of the company’s stock.

A SmartAsset survey of nearly 300 financial advisors taken in early August found that 80% believe the U.S. either is already in a recession or will enter one during the next 12 months. A rough rule of thumb to define an economy in recession is when it records two straight quarters of declining economic growth. For the second quarter of 2022, the country’s gross domestic product (GDP) fell by 0.9% after a contraction of 1.6% for the first quarter. 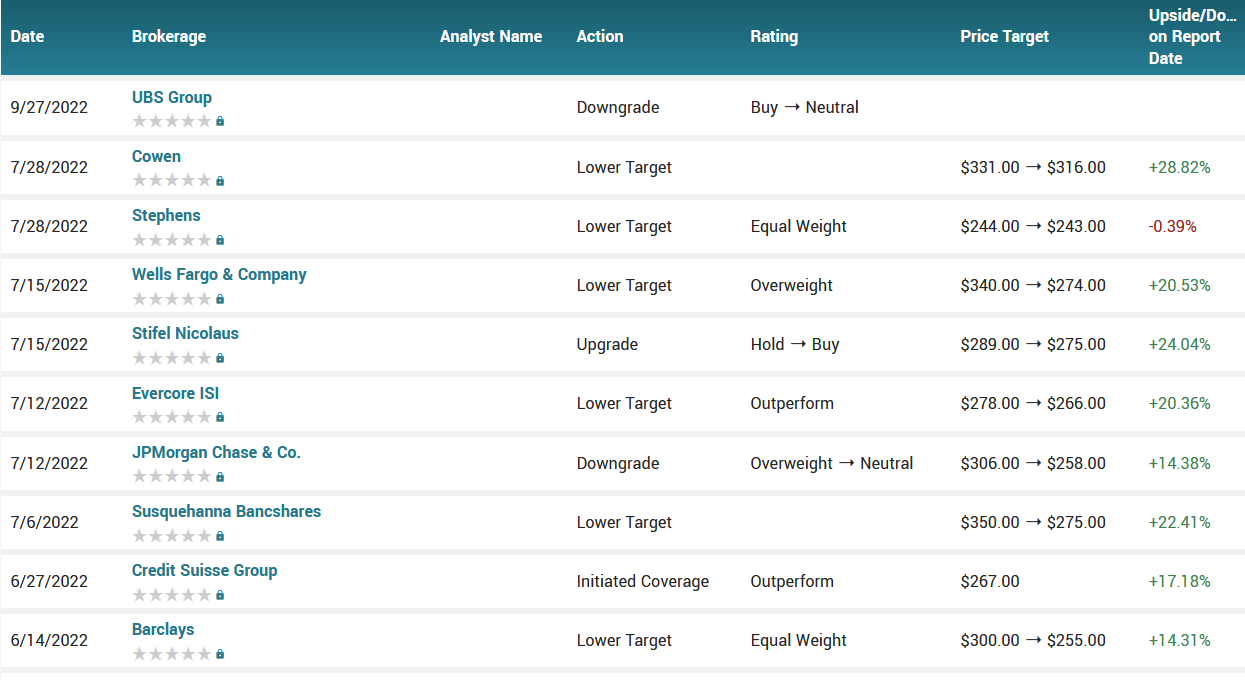 So far this week, price action is following the frustrating pattern of early gains, followed by late-day losses.

The faux rally was symptomatic of bear markets, when stocks often find strength in the early hours but buyers disappear by the close. 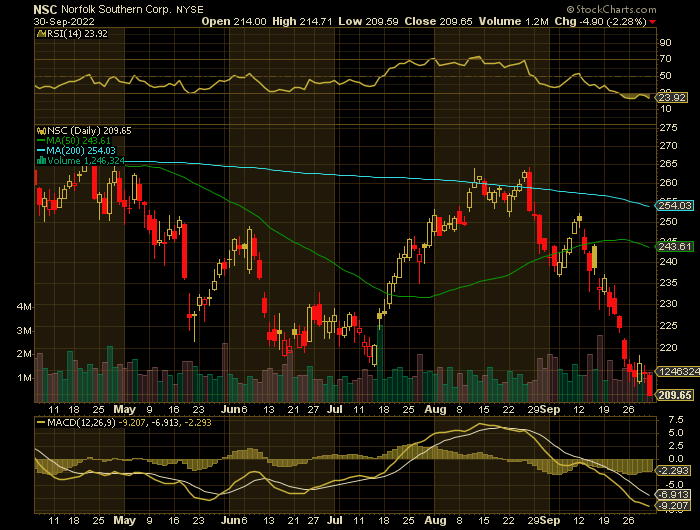