NIO Stock In A Fast Uptrend!

“State-of-the-Art Members,” using an options call trade, made potential profits of 37% in 1 day!

More is expected when the market opens. 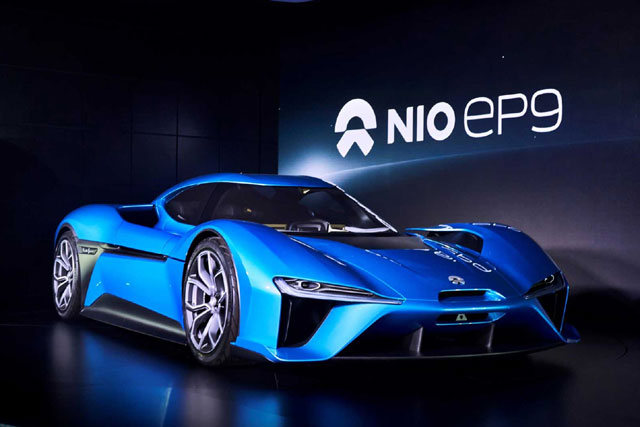 NIO stock is experiencing further movement upwards after an analyst got more bullish. Tuesday, Citigroup‘s Jeff Chung increased his price target for stock in the Chinese electric vehicle maker, believing things are looking up for the third quarter and the second half of 2021.

On Monday, NIO stock price moved higher after the company said it will hold a "NIO Power Day" event next month. "NIO Power" is the company's name for its suite of vehicle-recharging products and services. READ Details Below.....

Typically, it's smaller companies that generate some of the fastest sales growth, while large-cap stocks (those with market caps of at least $10 billion) grow at a more tempered pace. Larger companies are more likely to have time-tested or mature operating models, making it less common that they generate eye-popping revenue growth.

However, Nio Inc – ADR (NYSE: NIO), often referred to as "the Tesla of China," and is showing great promise in following in the footsteps of the EV pioneer, is bucking the trend in this situation.

Nio is on track to, at minimum, quintuple its sales over a four-year period, according to Wall Street's consensus revenue estimate for 2024 (or fiscal 2025). You could rightly say that this is one of the fastest-growing large-cap stocks on the planet.

Despite a global chip shortage, NIO has shown Wall Street that it can effectively scale its production. After delivering 20,060 vehicles in the first quarter, the company is on pace to deliver between 21,000 and 22,000 EVs in the second quarter. Once global chip supply issues are resolved, NIO will look to boost its annual delivery capacity to around 150,000 EVs.

For NIO, innovation is extremely important. It's been introducing one new vehicle each year, with the sportier EC6 crossover SUV hitting showrooms last summer. It's quickly become a hit with EV buyers.

Additionally, NIO introduced a battery-as-a-service program. For a monthly fee, this subscription service allows buyers to replace or upgrade their vehicle's batteries. It also reduces the initial purchase price of the vehicle. Though NIO is giving up near-term margin by reducing the purchase price of its EVs, it's keeping buyers loyal and generating very high margin residual service revenue.

NIO has also done an excellent job of ramping up production over the past year. Even though output is currently constrained by a global chip shortage, it's on track to deliver between 21,000 and 22,000 EVs in the second quarter. For some context, it delivered only 20,565 vehicles in the entirety of 2019.

It wasn’t so long ago that analysts and investors alike were ready to write off their losses and give up on electric vehicle manufacturer Nio. But China’s answer to Tesla’s dominance powered on, eclipsed estimates, and most importantly, kept its balance sheet in line. And it’s paid off, in a big way. Nio Tesla’s largest competitor in China, has also started to offer a batteries-as-a-service concept, in which car buyers can ‘lease’ the battery of their vehicle and save as much as $10,000 on the price of a new vehicle, while also offering buyers the option to swap batteries after a few years of use.

This could be huge for Nio, which is already making major moves. In fact, just last fall, Nio revealed a pair of sedans that even the biggest Tesla die-hard would struggle to pass up. The vehicles, meant to compete with Tesla’s Model 3, could be just what the company needs to pull back control of its local market from Elon Musk’s electric vehicle giant.

Nio broke above its downtrend with nearly a 10% gain. Over the weekend, analysts reported 5 more battery swap stations in China from the company and also noted they have a Power Day coming up July 9.

Nio said it will hold a "NIO Power Day" event next month. "NIO Power" is the company's name for its suite of vehicle-recharging products and services.

The event will commemorate the third anniversary of NIO Power's launch, the company said.

Electric-vehicle investors have become accustomed to companies using big-day events to unveil new products and services but the excitement is warranted in this case. NIO has said that it is accelerating the rollout of its new-and-improved battery-swap stations, and we might see updates on that front; but I'm not (yet) expecting big news from the July 9 event.

The future is electric …And it could be much more than that.

It’s about on-demand cars, virtual showrooms, and an end to insurance, maintenance and commitment.

This is where we get super clean and wildly convenient.

EV sales broke just about every previous EV record in 2020, even in the middle of a pandemic.

EV sales soared by over 40%, while overall car sales dropped by 14%.

And we’re just getting started and now there’s another potential huge disruptor. This one won’t hinder the mainstreaming of EVs, but it could help rock the auto industry to its core.

According to one analyst, the car subscription market is set to top $12 billion by 2027.

The first supercharged growth stock Wall Street sees driving away from its competition is electric-vehicle manufacturer NIO. Even though NIO is getting near the mean consensus price target, the high-water mark among analysts calls for the company to hit $92 a share. That implies a more than doubling in NIO's shares, based on where it closed this past weekend.

The bullishness surrounding NIO likely has to do with the company's location and its ability to scale production. Concerning the former, China is the largest auto market in the world. By 2035, the projection is that half of all vehicles sold will be powered by some form of alternative energy, 95% of which are EVs. Since the EV market is still nascent in China, the door is wide open for NIO to become a major player.

A number of brokerages have recently issued reports on NIO.....

Six analysts have rated the stock with a hold rating and fourteen have assigned a buy rating to the company. The company has an average rating of “Buy” and an average price target of $49.86.

China-based electric vehicle manufacturer Nio is one of the best performing stocks on the New York Stock Exchange today. At last check, the security is up 8.7% at $49.01, eyeing its highest close since March 1. NIO boasts a 26.9% lead over the last month and a 609.7% year-to-date gain. Options traders have been taking notice of the Tesla (TSLA) competitor as a result.

The Options Trade On NIO Stock Should Continue To Provide Profit!

Will We Hold Or Take The Existing Profit On NIO Stock After Today!

Will We Recommend Further Trades On NIO Stock In The Future?

Back to Weekly Options USA Home Page from NIO Stock