Members of “Weekly Options USA,” Using A Weekly put Option,
Are Up 100% Due To Wall Street Slashing Earnings Expectations Ahead Of Its Next Quarterly Report.

Wall Street is slashing earnings expectations for Nike Inc (NYSE:NKE) two weeks ahead of its next quarterly report.

Nike, Inc. stock is expected to report earnings on Thursday, September 29, 2022 after the market closes.

This set the scene for Weekly Options USA Members to profit by 100% using a Weekly Put Option!

Why the Profit on Nike Inc Stock?

Wall Street is slashing earnings expectations for Nike Inc (NYSE:NKE) two weeks ahead of its next quarterly report.

Nike, Inc. is expected to report earnings on Thursday, September 29, 2022 after the market closes.

One of the analysts who recently lowered his price target for the sneaker giant explained that his decision was motivated by inventory and other headwinds.

“In the near term, they're dealing with unprecedented macro headwinds: inventory levels, FX movements, European consumer that's now under incredible pressure,” John Kernan, Cowen’s managing director for retail and consumer brands, said. “So I think when you look at what they already issued guidance for the full year, I don't think they're going to be apt to change that much. They certainly have to take up their headwind guidance.”

According to Barclays, Nike stock is no longer heading to $125 but will rather max out closer to $110 per share 12 months from now -- and that's the good news.

Nike shares have been under pressure this year, down roughly 35% year-to-date.

Over the past month, shares of this athletic apparel maker have been down -10.5%.

Kernan recently moved his price target down marginally from $127 to $124. In a recent note to clients, he stated Cowen expects Nike to lower growth estimates, citing the company still battling a strengthening U.S. dollar and inventories remaining high across North America.

"Nike's overall inventory dollars in North America were up 44% in its most recent quarter," Kernan said. "I think inventory levels will remain high. We've seen that in the channel play itself out in very heavy apparel promotions throughout the sector. And whether it's Nike, Adidas, Under Armour — everyone's been a bit more promotional recently.”

Despite the inflationary environment, Kernan still maintains an Outperform rating on the stock, stating that many of the headwinds are near-term concerns and not emblematic of Nike’s larger trajectory.

In addition, it sells a line of performance equipment and accessories comprising bags, socks, sport balls, eyewear, timepieces, digital devices, bats, gloves, protective equipment, and other equipment for sports activities under the NIKE brand; and various plastic products to other manufacturers.

The company markets apparel with licensed college and professional team, and league logos, as well as sells sports apparel. Additionally, it licenses unaffiliated parties to manufacture and sell apparel, digital devices, and applications and other equipment for sports activities under NIKE-owned trademarks.

The company was formerly known as Blue Ribbon Sports, Inc. and changed its name to NIKE, Inc. in 1971. NIKE, Inc. was founded in 1964 and is headquartered in Beaverton, Oregon.

Nike is expected to post earnings of $0.93 per share for the current quarter, representing a year-over-year change of -19.8%. Over the last 30 days, the Consensus Estimate has changed -1%.

The consensus earnings estimate of $3.78 for the current fiscal year indicates a year-over-year change of +0.8%. This estimate has changed -0.4% over the last 30 days.

Increased freight and logistics costs will hurt margins in the near term. Elevated marketing expenses, higher operating overhead and demand-creating expenses, and increased investments to enhance store and digital operations have been raising SG&A costs. Also, there are higher costs to support brand campaigns and digital investments.

The exit from the Russia business due to the Ukraine-Russia conflict and COVID-related disruptions in some parts of Greater China are likely to be the key concerns. A tough and competitive labor market remains another concern. The factors pose a threat to the industry players’ margins.

The macroeconomic environment has not improved drastically.

While oil prices have come down since our last article in June, they still remain at significantly higher levels than in 2021. The recent oil production cut initiated by OPEC+, may result in rising oil prices again.

Inflation in the U.S. and Europe remains high. The soaring energy prices in Europe, fueled by the uncertainty related to Russian gas supplies, cause significant concerns before the winter months.

China has imposed further lockdowns due to Covid-19 outbreaks across the country. This may lead to reduced demand for Nike's products as well as to potential supply chain disruptions.

Recent global developments are not creating a favorable environment for consumer discretionary firms such as Nike.

Economic sanctions imposed on Russia during the fourth quarter of fiscal 2022, impacted Nike’s local business and a reduction in the Ruble liquidity affected its ability to manage operational impact and related foreign currency risk. As a result, they deconsolidated their Russian legal entities, the net revenues of which were less than one percent of consolidated net Revenues for fiscal 2021. The deconsolidation of our Russian legal entities resulted in a one-time, pre-tax charge of $96 million recognized within Other (income) expense, net, classified within Corporate. Subsequent to the end of fiscal 2022, Nike made the decision to leave the Russian marketplace.

In the economic and industry risks section of the annual report, Nike highlights the risk associated with foreign currency transactions:

In our opinion, despite Nike's hedging strategy, the currency headwinds are likely to last as long as the U.S. dollar remains at the current levels against foreign currencies.”

Although fundamentals and the macroeconomic environment have not drastically improved, it is believed that at the current valuation Nike's stock still remains overvalued.

Nike's price-to-earnings ratio (FWD) is approximately 32x, which is more than double the consumer discretionary sector median of ~12.5x. The firm's EV/EBITDA and P/CF are also showing a similar trend and indicating that Nike is trading at a significant premium compared to its peers.

Although Nike is a growing company and its strategic shift to direct-to-consumer sales may result in expanding margins; however, such a significant premium is not justified.

NIKE had its price objective lowered by equities researchers at Cowen from $127.00 to $124.00 in a research note issued last Monday. The firm currently has an “outperform” rating on the footwear maker’s stock. 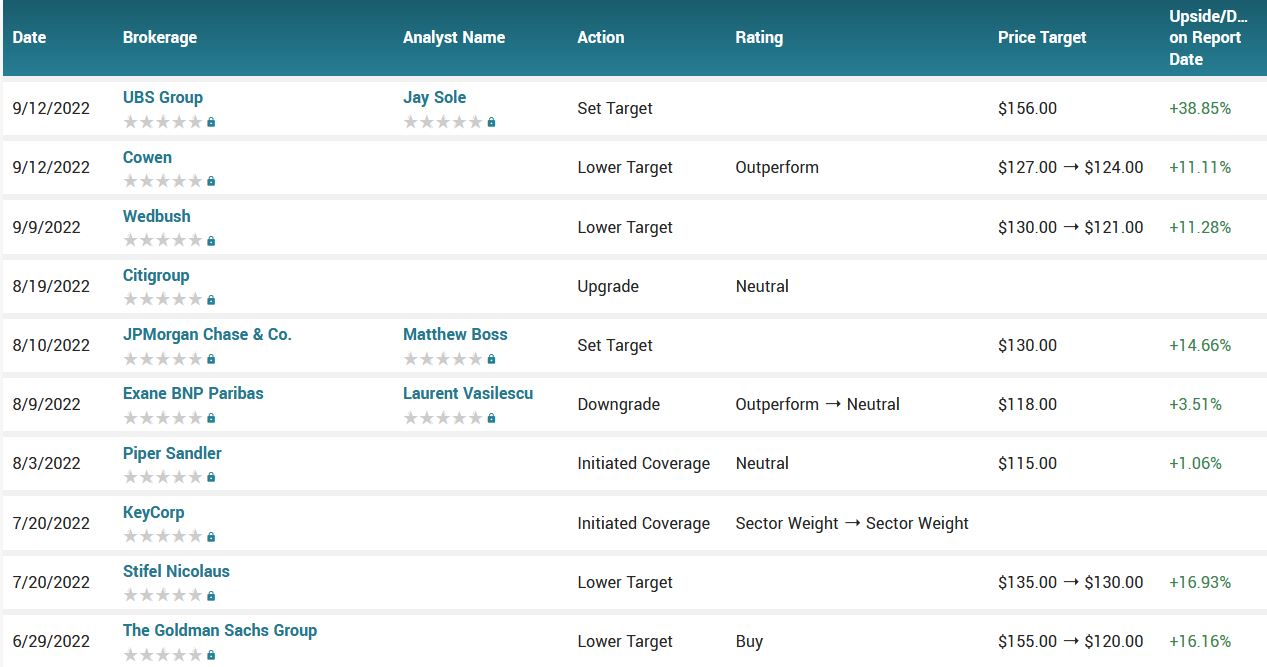 According to the issued ratings of 29 analysts in the last year, the consensus rating for NIKE stock is Moderate Buy based on the current 9 hold ratings and 20 buy ratings for NKE. The average twelve-month price prediction for NIKE is $136.42 with a high price target of $176.00 and a low price target of $115.00.