And, “Weekly Options” Members are Up 48% or 95% Using A Weekly call Option!
Can More Profit Be Expected?
Don’t Miss Out On Further Profit!

And, “Weekly Options USA” Members, Are Up 48% or 95%, depending on the strike price used, after executing a Weekly Call Option!

On January 20, Netflix Inc (NASDAQ: NFLX) stock tumbled more than 20% after the company released its fourth-quarter earnings report. Although NFLX reported better-than-expected profit and revenue that was in line with Wall Street's expectations, the company's outlook for subscriber growth was disappointing.

NFLX is a reminder of just how quickly the market can move these days, as the stock has fallen a remarkable 40% from its 52-week highs from back in November.

However, it appears that there is a consensus that a bottom may have been reached!

Bear markets feel very unnerving to live through, but fortunately, the bear doesn't stick around long. Stocks crash and then rebound, and those rebounds happen as suddenly as when the market falls. Netflix could be a good example of this scenario!

The company was founded by Marc Randolph and Wilmot Reed Hastings Jr. on August 29, 1997 and is headquartered in Los Gatos, CA.

The Major Catalysts for the NETFLIX Weekly Options Trade….

Netflix reported Q4 revenue of $7.71 billion, up 16% year-over-year, and added 8.28 million global paid net subscribers during the quarter, both exceeding the consensus estimates. Netflix also stated that it will be free cash flow positive in 2022, which is another positive that might be getting overlooked.

The stock is getting hammered following the report because of its forecasted guidance for subscriber growth in Q1 2022, which could be hinting at the fact that streaming video competitors are eating into the company’s market share.

With that said, Netflix recently increased its prices, has an internal recommendation software that will be tough for competitors to replicate, and has great opportunities in international markets to gain more users going forward.

In a letter to his clients, Ackman praised the company's "best-in-class management team" and on Twitter the manager said he has long admired Netflix CEO Reed Hastings and the "remarkable company he and his team have built."

Netflix shares climbed as much as 5% in after-hours trading. They had tumbled more than 30% in the last five days, a much steeper swoom than the broader market. After the market closed last Thursday, Netflix forecast weak subscriber growth.

Ackman, whose firm invests $22.5 billion, wrote that he had been analyzing Netflix at the same time he was investing in Universal Music Group and was ready to buy when Netflix' "stock price declined sharply last Friday."

"Now with both UMG and Netflix, we are all-in on streaming as we love the business models, the industry contexts, and the management teams leading these remarkable organizations."

After a brutal two weeks for the market this month, Goldman Sachs is saying it's about time for investors to dip their toes in the volatile waters.

Not whole-hog on adding risk assets to the portfolio, but a nibble.

"To the extent that zero interest rate policies, negative real interest rates and quantitative easing have been supportive for risk assets, it is understandable that a perceived move away from these supports should cause a correction, particularly given high valuations. But this adjustment has now been reflected in the markets and the downside risks from here are much lower so long as economies can grow. Our Risk Appetite Indicator (GSRAII) has fallen back, suggesting we are getting closer to levels that have typically been a good entry point for longer-term investors," said Goldman Sachs strategist Peter Oppenheimer on Wednesday.

However, the pandemic didn't necessarily create new demand. Rather, it accelerated trends that were already in progress in the global streaming market. This doesn't just apply to subscriber growth. Companies like Disney (NYSE:DIS) accelerated their streaming rollout plans as well, making more content available for subscribers. Money is also flooding into production. It seems as if every single content producer now has a unique offering that consumers need to pay a monthly subscription for.

The company generated positive cash flow in 2021 and expects to remain cash generative for the foreseeable future. As such, for the first time in its history, it is no longer reliant on investor financing to keep the lights on and fund content development and licensing spending.

This is a huge step forward for the business.

Its subscription service has become a non-negotiable spend for some consumers, which gives the enterprise an air of defensiveness. Its cash flows are relatively stable and predictable, and it can increase its subscription prices. Consumers are unlikely to notice a 5% per annum increase in prices. Even if they do, it's such a small expense that they are unlikely to cancel the subscription, especially when one considers the amount of entertainment value a Netflix account provides.

The sticky nature of the client base is the primary reason the stock now offers an interesting opportunity. Based on Wall Street growth projections for 2023, the stock is trading at a forward price-earnings ratio of just 25. This seems incredibly cheap for a business with a sticky customer base and the potential for substantial revenue and profit growth in the years ahead.

Indeed, even if the company's subscriber growth falls to zero, it still has the potential to grow earnings through price increases.

With the monster success of shows like Squid Game and Money Heist, as well as recent movies like Red Notice and Don't Look Up, it appears as though the business still excels at entertaining viewers. And in 2021, Netflix had the most Emmy and Oscar nominations and wins of any studio out there.

As a result, it would be the last streaming subscription consumers would cancel if they had to. In fact, according to Nielsen data, Netflix has a 7% share of total TV viewing time in the U.S., the most of any streaming service.

From the customer's perspective, Netflix is still the top dog, with an exceptional value proposition that is increasing with the introduction of mobile games. And management just raised prices in the U.S. and Canada.

The weak outlook for the first quarter seems to have taken Wall Street by surprise. However, despite several analysts cutting their NFLX price targets and downgrading the stock, the general consensus remains bullish. The median price target is $521, indicating more than 30% growth potential in 2022.

Despite lowering his NFLX price target from $700 to $650, BMO Capital analyst Daniel Salmon remains bullish, predicting an upside of nearly 70%. The analyst believes Netflix management will engage in a buyback later this quarter. He also notes that Netflix has little regulatory risk, compared to other FAANG stocks.

Another bull is Cowen analyst John Blackledge, who lowered his firm's price target on Netflix from $750 to $600. But he maintained his Outperform rating on NFLX, implying an upside of more than 50%. The analyst reported that foreign exchange headwinds had compressed margin expectations in Netflix's guidance.

Still on the bull side, UBS analyst John Hodulik lowered his firm's price target on Netflix from $690 to $575. But that's still nearly a 50% upside. He also reiterated his "buy" recommendation on NFLX shares. The analyst acknowledges the soft first-quarter subscriber outlook and attributes it to macro pressure in Latin America. Hodulik remains bullish on the company's operating leverage due to Netflix management holding its outlook at 300bps of average annual margin expansion. 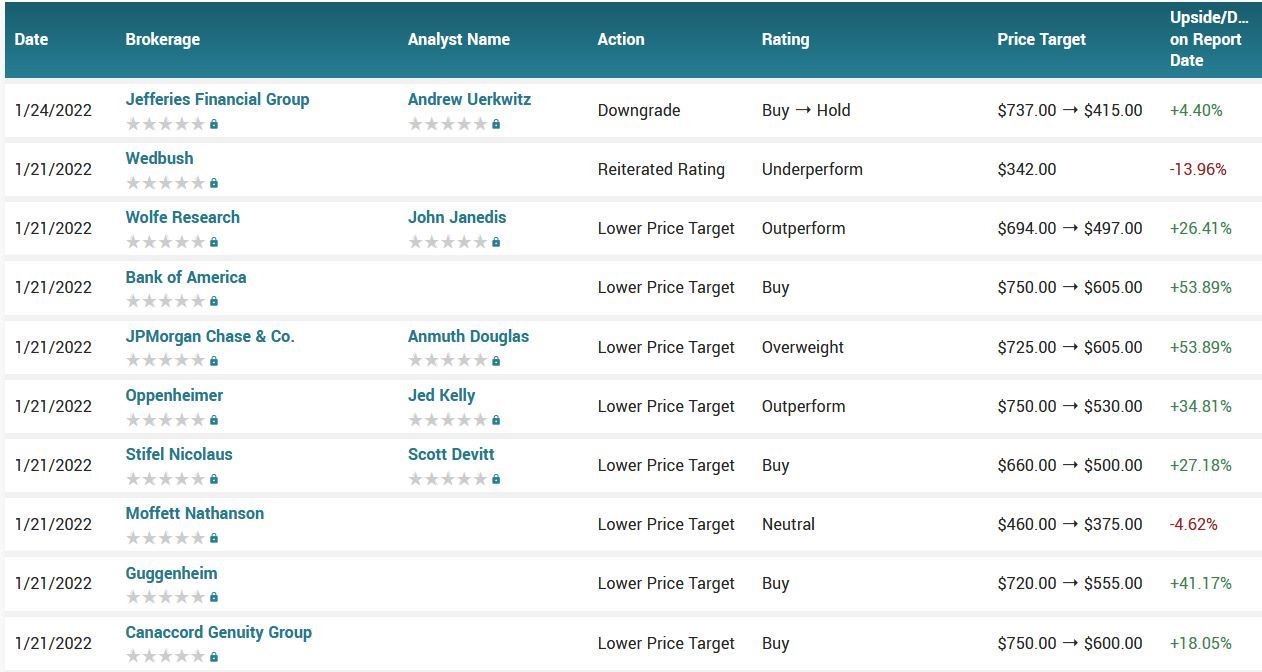 Shares of Netflix plummeted after its recent earnings report. Net subscriber additions were just shy of management's forecast, but Netflix has been here before. Netflix is an almost indispensable form of entertainment that continues to look well-positioned for long-term growth.

Netflix's something-for-everyone content strategy has gained 221 million subscribers globally, but there still in the early innings of where streaming media is headed over the next 30 years. With the massive lead it has in viewers and content investment, it's difficult to imagine a world without Netflix.

Subscriptions might slow when the economy is weak, but Netflix's recurring revenue stream would help me sleep well no matter how the stock market is performing. Plus, with the company's free cash flow improving, Netflix will have more cash to grow its content budget and maintain its lead in streaming.

We Have Had A Successful Netflix Trade!

What Further Netflix Weekly Trades Will We Recommend?

Back to Weekly Options USA Home Page from Netflix