Members of “Weekly Options USA,” Using A Weekly Put Option,
Make 76% Potential Profit On The Day!
More to come?
Join Us and GET THE TRADEs!

Where is it headed now?

However, last week's selloff paled in comparison to the bloodbath on Wall Street today. All three major indexes logged their fourth-straight loss, with the Dow in particular shedding 876 points to close at its lowest level since February 2021. The S&P 500 closed in bear market territory and at its lowest level since March 2021, while the Nasdaq fell to levels not seen since November 2020.

In April, Netflix NFLX lost subscribers for the first time in more than a decade, signaling trouble ahead for the industry as rising prices of food and gas left people with little to spend on entertainment.

Suspending its services in Russia after the Ukraine invasion also took a toll on Netflix.

Goldman downgraded the stock to "sell" from "neutral" and slashed its price target to $186 from $265, the lowest PT among analysts covering the stock, according to data from Refinitiv.

"We have concerns around the impact of a consumer recession as well as heightened levels of competition on demand trends (both in the form of gross adds and churn), margin expansion, and levels of content spend and view Netflix as a show-me story with a light catalyst path in the next 6-12 months," Sheridan warned in the new note to clients.

On Tuesday, May 10, 2022, we executed a Weekly Put Option on Netflix NFLX providing members with a potential return of 227%.

Many of the catalysts mentioned at that time are still applicable today.

Netflix was on the outs long before April rolled in. The stock took a massive haircut in January after its subscriber growth guidance for the first quarter came in below Wall Street's expectations.

The first-quarter report hit the news wires on April 19, and it wasn't pretty. The soft prediction for subscriber additions turned into a negative number for the first time since the Qwikster era in 2011. Even worse, management sees the negative trends continuing in the second quarter, so the next quarter's subscriber drop looks even larger.

It didn't matter that Netflix also reported revenue right in line with analyst projections while crushing analysts' bottom-line targets. Earnings of $3.53 per share left the Street consensus far behind at $2.90 per share.

The company is raising subscription prices and tweaking its business operations to cut costs and boost profits. But investors are ignoring all of that to focus on those all-important subscriber figures. Netfix shares fell more than 37% the next day alone.

The high Inflation Rate is a bearish catalyst for Netflix stock for several reasons. First, the Fed will be forced to raise the rate aggressively in order to curb inflation. This is bearish for tech stocks in general.

Analyst estimates for Netflix NFLX have been moving lower after the release of a disappointing quarterly report in April. Currently, the company is expected to report earnings of $10.91 per share in 2022 and $11.97 per share in 2023, so the stock is trading at 15 forward P/E.

While such valuation levels may look cheap for Netflix, traders should keep in mind that the company’s growth is slowing down. In addition, the situation in the economy is worse than previously expected, which could hurt Netflix’ financial performance.

"The cost of living crisis will have a major impact on all streaming services. Let's not forget the market is now awash with too many streaming media services chasing too few services," said Paolo Pescatore, an analyst at PP Foresight.

"Expect some to pivot more towards a yearly discounted bundle to entice users and increase loyalty."

Netflix is already considering a cheaper subscription that includes advertising, following the success of similar offerings from rivals HBO Max and Disney+. 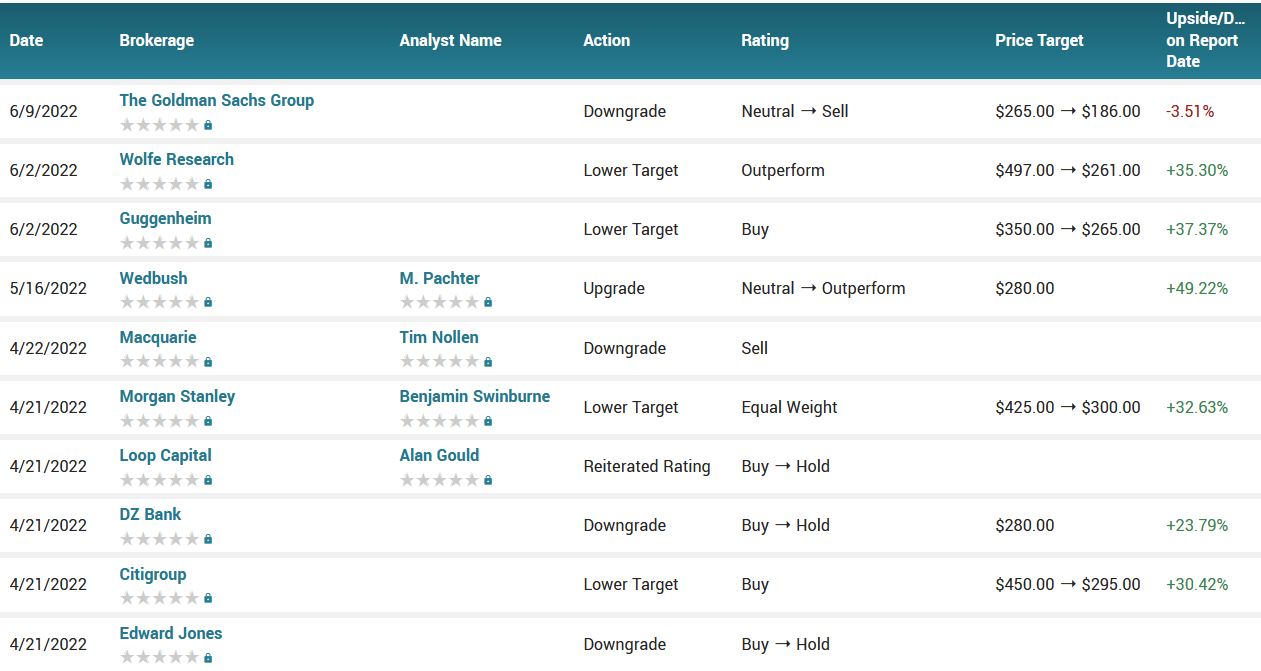 According to the issued ratings of 38 analysts in the last year, the consensus rating for Netflix stock is Hold based on the current 4 sell ratings, 24 hold ratings and 10 buy ratings for NFLX. The average twelve-month price prediction for Netflix is $365.24 with a high price target of $730.00 and a low price target of $186.00. 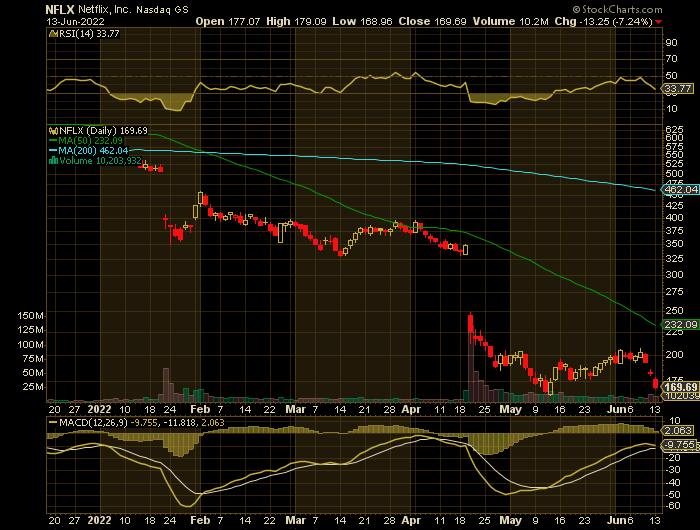 Back to Weekly Options USA Home Page from Netflix NFLX