Micron Technology MU is expected to report earnings on March 29, 2022, after the market closes. The report will be for the fiscal Quarter ending Feb 2022.

Based on 6 analysts' forecasts, the consensus EPS forecast for the quarter is $1.85. The reported EPS for the same quarter last year was $0.90. 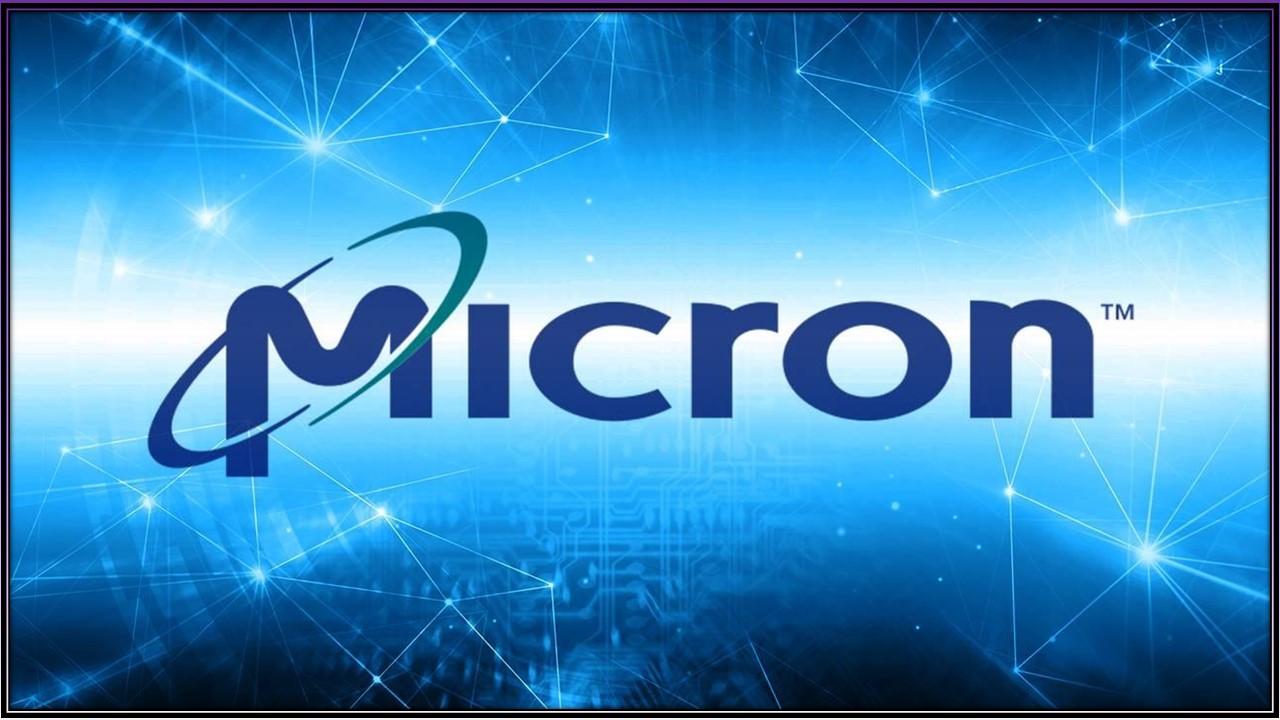 Micron Technology MU has favorable rankings and should provide good returns going forward as an investment in technology or consumer discretionary behemoths.

Micron Technology MU is witnessing growing demand for memory chips from cloud-computing providers and acceleration in 5G cellular network adoptions. The rising mix of high-value solutions, enhancement in customer engagement and improvement in cost structure are the other growth drivers of MU.

Also, 5G adoption beyond mobile is likely to spur demand for memory and storage, particularly in Internet of Things devices and wireless infrastructure. These will act as major positives for Micron Technology going forward.

Micron Technology MU has an expected earnings growth rate of 47.7% for the current year (ending August 2022).

Micron Technology MU is expected to report earnings on March 29, 2022, after the market closes. The report will be for the fiscal Quarter ending Feb 2022.

Based on 6 analysts' forecasts, the consensus EPS forecast for the quarter is $1.85. The reported EPS for the same quarter last year was $0.90.

Micron Technology last issued its quarterly earnings results on Monday, December 20th. The semiconductor manufacturer reported $2.16 earnings per share for the quarter, topping the consensus estimate of $2.11 by $0.05. Micron Technology had a return on equity of 19.01% and a net margin of 24.86%. The business had revenue of $7.69 billion for the quarter, compared to analyst estimates of $7.68 billion.

During the same quarter in the previous year, the firm earned $0.71 earnings per share. The company’s revenue was up 33.2% on a year-over-year basis.

Micron Technology, Inc. engages in the provision of innovative memory and storage solutions.

The company was founded by Ward D. Parkinson, Joseph Leon Parkinson, Dennis Wilson, and Doug Pitman on October 5, 1978 and is headquartered in Boise, ID.

Data centers are by far the largest users of memory produced by companies like Micron Technology MU. Thanks to the growing use of artificial intelligence (AI) systems, the Internet of Things, and smart cars, among other things, the demand for data centers has expanded rapidly. This trend is unlikely to slow down anytime soon as we move into the 5G era, which will allow for even higher data consumption and commensurately greater storage requirements.

The need for high-speed computing to carry AI workloads, the movement toward heterogeneous computing systems, and the displacement of hard disk drives by solid-state drives, are a few other factors driving higher demand for memory and data storage. The tailwinds are evident in the fact that Micron's data center revenue grew by 70% year-over-year in its fiscal 2022 first quarter, which ended Dec. 2.

In his opening remarks on the fiscal Q1 earnings call, President and CEO Sanjay Mehrotra said that the growth in memory and storage for data centers will outpace the general market over the next decade. If he's right, the tailwind propelling Micron will last for years, if not decades.

Another major shift that will benefit Micron Technology MU is the movement from 4G to 5G smartphones. 5G networks offer significantly faster download speeds, so users with 5G mobile devices will naturally use them to do more and to run content-heavy apps more often. But network speed alone will not do the job. Those smartphones will also need to have the built-in hardware to handle those enhanced workloads.

That brings us to the main point: 5G smartphones will need a lot of memory and data storage to run smoothly. According to Mehrotra, recent 5G smartphones have 50% more DRAM (dynamic random-access memory) and twice the amount of NAND (non-volatile flash memory) compared to 4G phones. Both should rise even further as manufacturers continue to make ever more powerful phones.

The transition from 4G to 5G phones has already profited the tech company. Micron reported a 27% increase in revenue to $1.9 billion from its mobile phone division in its latest quarter. This growth trend could continue for a long time as people gradually upgrade their devices.

So far, Micron Technology MU has gotten around 10% of its revenue from its automotive and industrial business. That percentage will rise. On the earnings call, Mehrotra said management expects "automotive and industrial to be the fastest-growing memory and storage markets over the next decade." All Micron's shareholders will have to do is buckle up and enjoy the ride.

According to Englander, Micron Technology MU, one of the world's largest semiconductor firms that targets the memory segment, fits their portfolio. The chip industry is divided into memory and non-memory segments, and the former consists of products such as random access memories (RAMs) that are used in a variety of markets that cover both personal and enterprise computing.

Micron Technology MU brought in $7.69 billion in revenue and $2.16 in non-GAAP EPS for its fiscal Q4. These let it beat analyst estimates for both and the investment firm Wedbush raised the company's price target to $120 from $100 in February 2022. To justify its decision, the firm highlighted that the growth in the semiconductor sector will spell positive demand for the company. Micron Technology also introduced a new memory for the fast growing datacenter segment in March 2022.

Micron Technology’s largest investor is Paul Marshall and Ian Wace’s Marshall Wace LLP. It has a stake of $507 million through owning 5.4 million shares.

“It’s hard to explain how shares of Micron Technology MU, manufacture of DRAM and NAND semiconductor chips, can fall during a global chip shortage. In most industries, focusing on demand can give you a clear insight into what lays ahead for a company. Today, the memory and storage chip industry is no different. However, in the past, companies focused on market share led to the reckless build out of chip fabrication plants (FABs), oversupply, falling average selling prices (ASPs) of memory and storage chips, lower margins, and declining cash flows. As the industry consolidated – there are now just 3 major producers of DRAM and 5 on the NAND side – rational behavior among the key players began to take hold as competitors began focusing more on R&D. Currently, chip pricing remains cyclical although less so than in the past and that cyclicality has a long-term upward bias. The ongoing transition to newer and more robust platforms (3D 176-layer NAND & 1-Alpha node DRAM) has provided the memory and storage chip industry with improved supply capacity under its current manufacturing footprint, ultimately pressuring ASPs. Over the past three years, as most of the large platform conversions have already taken place, being able to add more bits per wafer has reached a saturation point. With no major FAB build outs planned in the near-term by competitors Samsung or SK Hynix, constrained supply and flattening cost curves should lead to durable and upward sloping ASPs once the recent volatility from the chip shortage subsides.

Currently Micron Technology MU trades at just 8x 2022 estimate earnings. MU is expecting growth in both DRAM and NAND not just from the supply of more chips to data centers, artificial intelligence, the auto sector, and mobile devices, but also from greater demand for gigabyte capacity per unit within those segments. With a healthy balance sheet, improving return on invested capital, and expanding cash flows, not only should Micron benefit from improving future earnings but its multiple should also reflect the transition to a flattening cost curve.”

Global semiconductor revenue in 2022 is forecast to grow 11% and reach a record-high of $680.6 billion, and this is after revenue soared 25% in 2021 according to IC Insights. The world's thirst for semiconductors is driven by the abundance of cell phones, portable technology, 5G and even the budding market for IoT (Internet of things) devices.

Value investor Mohnish Pabrai's top U.S. holding as per his latest 13F report is Micron Technology Inc., which is poised to benefit from these trends as the fourth-largest semiconductor company in the world.

Pabrai has been investing in Micron Technology MU for a very long time. Most recently, he added 15% to his position in the fourth quarter of 2021, during which shares traded for an average price of $78.57. Pabrai has often stated that he is not afraid to make focused bets and would be happy to hold a single stock if he knew it had the best return potential.

“We upgrade Micron to Outperform as the macro concerns have prompted a selloff, but a correction to the memory market, if any, won’t be prolonged & won’t change the structure,” wrote Li in a research note.

Li also noted that the Russian invasion of Ukraine is not expected to cause a "notable" disruption in supply or hurt demand and even with the current oversupply in the DRAM market, it's likely to balance out in the next quarter or two and prices will rebound.

Li also noted that China has yet to break the DRAM oligopoly, which includes Micron, which should help the market.

In addition, Li noted that Micron Technology MU is likely to see prices for DRAM rise later this year, going into 2023 before declining in 2024. "Supply discipline will keep the decline mild so that shipment increase still brings revenue and earnings growth then," Li added.

Last month, Citigroup reiterated its buy rating on Micron, noting that dynamic random access memory pricing could be higher in the second half of the year. 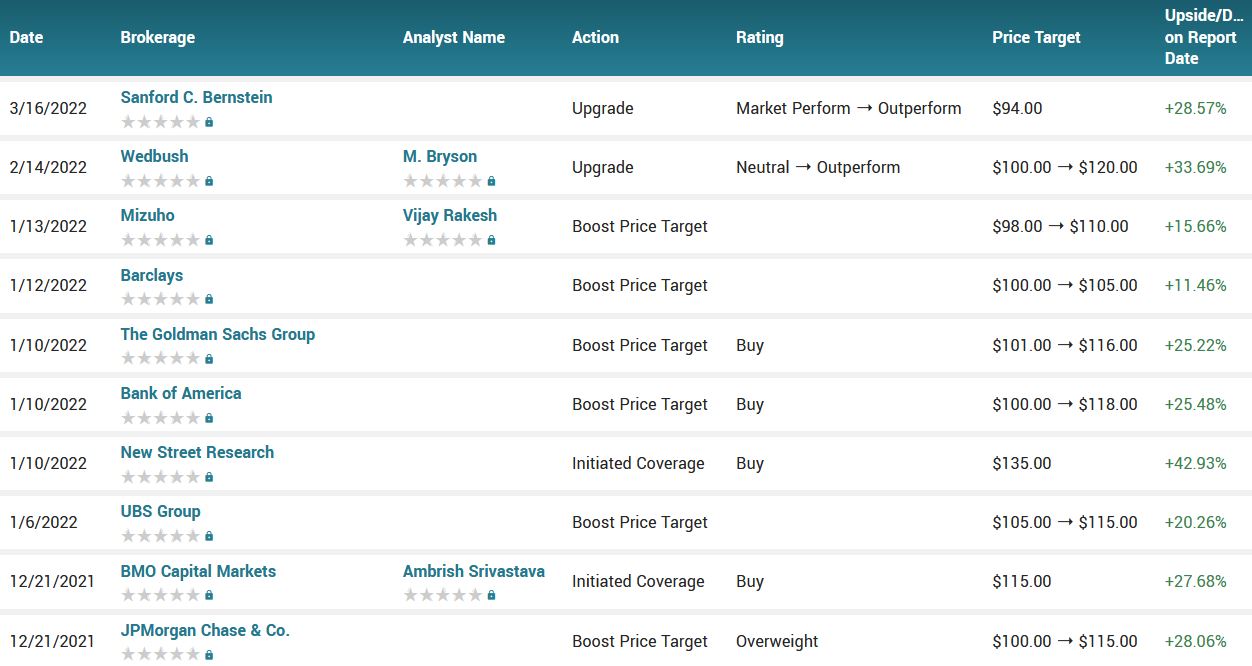 Micron is a fantastic company and a true leader in the semiconductor industry. The firm is ahead of its competitors in many technological areas and continues to innovate. They are growing fast and increasing margins.

The semiconductor industry is tremendously fast-paced, volatile and cyclical. Thus, expect lots of this moving forward. 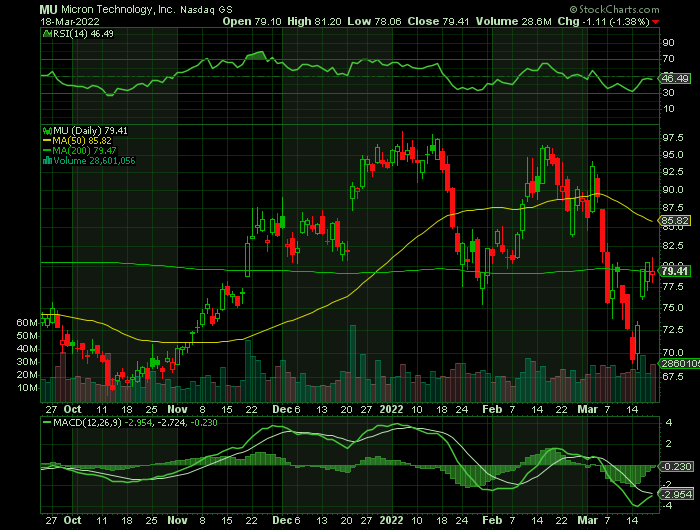