but, “Weekly Options USA” Members are Up 61% Using A Weekly put Option in 1 day!
Don’t Miss Out On Further Profit!

But, “Weekly Options USA” Members are up 61% using a weekly put option in 1 day!

Don’t miss out on further profit!

Meta Platforms (NASDAQ:FB) is no longer a growth stock. That, at least, was the message investors received when the parent of Facebook, Instagram and WhatsApp released its latest quarterly earnings last week.

Investor reaction to the company's disappointing earnings report was quick and intense. The stock plunged 26% during Thursday's trading, wiping out about $251.3 billion of market value.

The pummeling was so intense it made history for the Facebook parent company and markets: the selloff was the worst one-day crash in equity market history and resulted in the biggest loss in market value for any US company ever.

There's some validity to the argument that the current volatile trading environment has played its role in this extreme move, but there was also strong evidence in the report showing Meta is struggling on a number of fronts and that the best days for its shares are over in the current cycle.

The stock closed on Monday at $224.91, adding another 5% to what is now a 27% drop in the last week since the company’s disappointing Q4 earnings. During the same period, the benchmark NASDAQ 100 Index fell 10%.

Shares of Meta Platforms continued to slide once again yesterday as investors continued to process comments made by the company recently that indicated that Meta could potentially shut down Facebook and Instagram in Europe due to increasing regulations.

After shedding more than $230 billion of its market value in the last week, its valuation is less than a quarter of Apple’s $2.8 trillion market cap. Meta went down in history last Thursday for the biggest one-day crash in the stock market.

And it appears the downward movement has further to go!

As at the end of trading yesterday members were up 61%.

In other words, 1 Meta Platform option contract would have returned 337% potential profit for an outlay of $550, in one day.

The company engages in the development of social media applications as well as virtual and augmented reality products allowing users to connect through mobile devices, personal computers and other platforms. The company operates through two segments. The Family of Apps (FOA) segment which includes Facebook, Instagram, Messenger, WhatsApp and other services, and the Reality Labs (RL) segment, which includes augmented and virtual reality related consumer hardware, software and content.

The Influencing Factors For A Successful meta platforms Trade…..

The most disappointing element of the Q4 release: for the first time, Facebook’s user base has stopped growing. It even shrank in some markets.

According to the Menlo Park, California-based Facebook, daily users fell to 1.929 billion in the fourth quarter from 1.93 billion. The news, combined with a forecast for lower than expected revenue growth in the current quarter, sapped investors’ confidence and sent the stock tumbling.

Meta Platforms said it expected revenue growth to slow because users were spending less time on its more lucrative services. It also blamed surging inflation which is crimping advertiser spending. With these headwinds, the company is unable to neutralize the impact of changes in Apple (NASDAQ:AAPL) privacy settings which give users the choice of stopping apps from tracking their internet activities, denting profitability for companies that sell targeted advertising, one of Meta's biggest revenue sources. These changes could cost Meta some $10 billion this year.

In Q4 2021, Facebook parent company Meta Platforms met revenue expectations but missed EPS projections in its Q4 earnings last Wednesday. The social giant’s quarterly revenue came in at $33.67 billion, meeting analyst expectations of $33.41 billion. The company, which rebranded as Meta Platforms last October, reported revenue of $29 billion last quarter, which was on par with analyst expectations last year. After seeing a pandemic boost in online activity throughout 2020, its revenue and earnings growth is beginning to slow down.

User growth on its flagship platform Facebook this quarter was stagnant at 2.91 million monthly active users, compared to 2.9 million users reported last quarter — representing only an increase of 4% year-over-year. The platform’s daily active users declined from the previous quarter for the first time, dropping from 1.930 billion to 1.929 billion globally.

In the recent earnings call, Zuckerberg acknowledged the impact on business due to the “competitive marketplace” and named TikTok as a major challenger. “People have a lot of choices for how they want to spend their time,” he said, which is why the company is focusing more on Instagram Reels, its short-form video clone of TikTok. Zuckerberg also said regulation in Europe and Apple’s privacy changes have impacted its personalized ads business.

European regulators are working on a law that could potentially prohibit companies from sending Europeans' data across the Atlantic to the U.S. Meta Platforms said late last week that such a move could force the company to shut down Facebook and Instagram in the region.

As new users become a rare commodity in the post-pandemic environment, intensifying competition is another headache for Chief Executive Officer Mark Zuckerberg.  He told investors in a conference call that the social networking giant faced an “unprecedented level of competition,” with the rise of TikTok, the rival viral-video platform.

Another big hurdle that could hurt FB's future earnings— the company’s shift to virtual-reality headsets, augmented-reality glasses and virtual worlds, known as the metaverse, in which users can live and work. Meta Platforms plans to invest heavily in this project whose success isn’t guaranteed. Meta’s Reality Labs, which is giving a shape to this undertaking, lost $10.2 billion in 2021.

This big adjustment suggests that Facebook’s latest growth phase is over and investors might have to wait for the stock to recover lost ground. Argus Research, while downgrading Facebook to hold from buy, said in a note:

“The 4Q results were modestly disappointing, though it was the company’s outlook that both upset the market and led to our downgrade. Although controversy has often swirled around Meta, the company faces a long list of problems in 2022, with increased competition and pressure from Apple’s new advertising tracking policy being the most salient.”

Markets are on alert for rate rises in both the euro zone and the United States after the ECB last week was considered to have adopted a more hawkish tone. The United States reported stronger-than-expected jobs and earnings data.

European Central Bank President Christine Lagarde on Monday calmed some of those jitters, saying there were no signs that measurable monetary policy tightening would be required.

The company's rough turn of luck couldn't be happening at a worse time; as Facebook looks to pivot the broader company toward the "metaverse," they also shared that they spent nearly $10 billion on the effort -- and don't expect to recoup that money any time soon. While Meta is managing to ship more and more Quest headsets, there anecdotally hasn't seemed to be much interest in the company's Horizon Worlds platform, and there are few shortcuts toward finding an audience on an unproven hardware platform.

The AR/VR world is increasingly proving to be a tough place to do business. The point is, this stuff is hard, and the people who have been building in public are hurting even as they spend billions to develop the tech. There's no straightforward road for Meta Platforms to follow; they have to blaze a trail where others are actively failing and keep the rest of their company together while they do so.

In the spring, Apple launched changes to its iOS platform to limit how digital advertisers tracked and targeted iPhone users. Users can opt out of being tracked, making Meta's advertising platform less effective. The company began to feel its impact in its 2021 Q3, but management revealed the full scope of its effect in Q4.

While management mentioned competition from apps like TikTok, Apple's iOS changes are a big culprit for the low guidance. The changes weren't yet in place for the first half of 2021, creating tough comparables for the first two quarters of 2022. Wehner estimated that iOS would cost Meta roughly $10 billion in ad revenue this year.

Meta Platforms spends a ton of money on research and development.

Peter Thiel, one of the original investors in Facebook, will step down as a director for the social media giant's parent, Meta Platforms, the company announced after the market close Monday.

Thiel has been a director since 2005. He was one of the company's earliest investors and is one of Silicon Valley's top venture-capital investors. Thiel will remain director until Meta's 2022 annual shareholder meeting.

In addition to his role in getting Facebook off the ground, Thiel is also a co-founder of PayPal (PYPL) and Palantir Technologies (PLTR), a company that helps governments track down terrorists.

According to a Wall Street Journal report, Thiel intends to focus his efforts on helping Republican candidates supporting the agenda of former President Donald Trump in the 2022 midterm elections, according to a person familiar with the matter.

It may take a hot minute or two before investors consolidate their emotional hangover from Meta's awful earnings day and begin to buy the dip in the tech giant's valuations.

"I think there are some dark days ahead for Facebook. You can change your name every month if you want. Their strategy is ultimately social media and digital advertising," said Wedbush tech analyst Dan Ives.

Adds Ives, "[Facebook CEO] Mark Zuckerberg has an uphill battle to get back to growth."

Even Meta Platforms bulls such as long-time tech analyst Mark Mahaney are cautious on the stock price in the near-term.

"Shares are probably dead money at this level of growth for at least the next three months," Mahaney said. 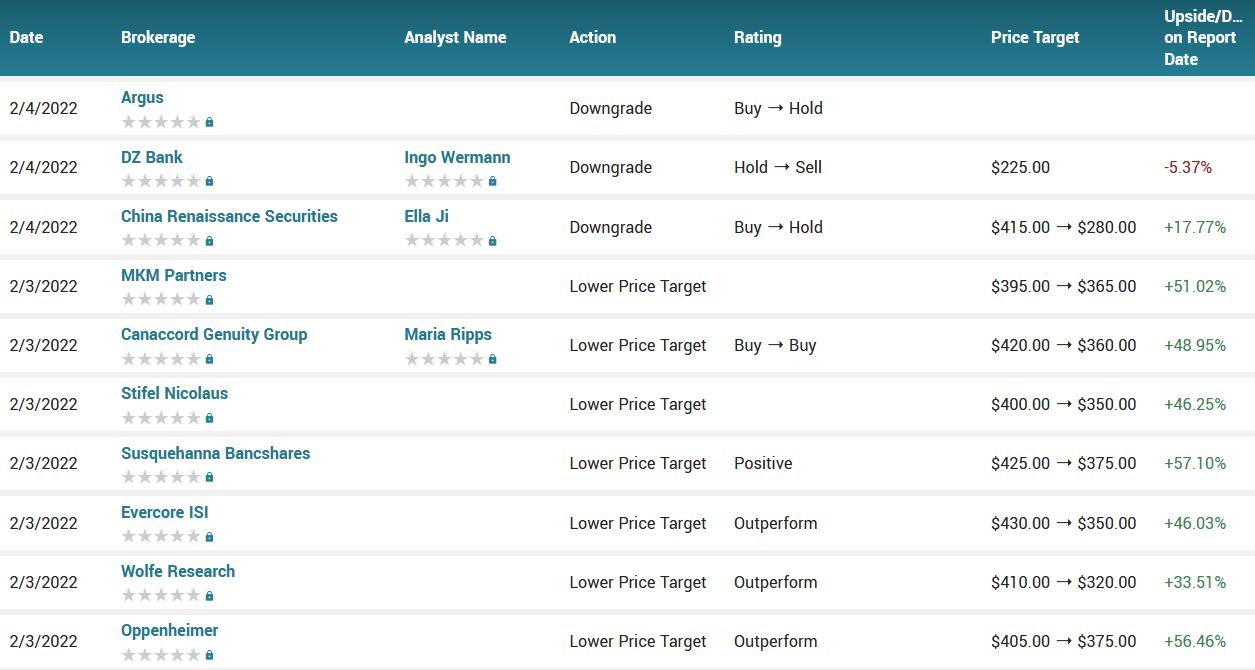 The plunge in Meta Platforms shares indicates a massive adjustment in investor expectations. That downside move could still have more room to run.

Meta Platforms looks like a company in a transition period; its social media networks aren't delivering the type of growth that investors might have come to expect.

Meta Platforms is a company that needs to prove itself as it changes directions toward the metaverse.

We Have Had A Successful Meta Platforms Trade With A Put Option!

What Further Meta Platforms Weekly Trades Will We Recommend?

Back to Weekly Options USA Home Page from Meta Platforms