But, Members of “Weekly Options USA” Are Up 140% Potential Profit
Using A Weekly Put Option!

GameStop Corp. (NYSE: GME) reports earnings on Thursday, after the market closes. However, to add to the stocks woes Wedbush Securities' analyst, Michael Pachter, wrote a client note reiterating his underweight (SELL) recommendation on GameStop stock at a price target of $45 per share (the company was trding at over $92 before trading started but is now currently trading at just over $78).

On top-of-this, other factors are in-play with ominous signs piling up that more turmoil is still coming, as key indicators point toward a potential recession.

The Ukraine-Russia crisis continued to dominate market movements, causing extreme volatility in the financial market and pushing the oil prices to a decade high and depressing stocks.

The U.S. Treasury yield curve has collapsed to near inversion -- a situation when short-term rates exceed those with longer tenors, which has often preceded a downturn. In Europe, energy costs have climbed to unprecedented levels, as sanctions against Russia exacerbate a global commodity crunch.

“Over time, the three biggest factors that tend to drive the U.S. economy into a recession are an inverted yield curve, some kind of commodity price shock or Fed tightening,” said Ed Clissold, chief U.S. strategist at Ned Davis Research. “Right now, there appears to be potential for all three to happen at the same time.”

The company was founded by Daniel A. DeMatteo in 1996 and is headquartered in Grapevine, TX.

Members Profits on the gamestop Trade.....

Members Profits on the GameStop Trade.....

This GameStop Options Put trade provided a potential profit of 140%.

Its meme stock status made GameStop one of the more volatile stocks in the past year, but Thursday's earnings announcement is an opportunity to bring hard numbers into the conversation. The video game retailer's shares are down so far in 2022, partly because meme stocks have lost some of their luster. There are more practical worries about the business, too, after Best Buy indicated recently that the video game niche slowed significantly over the holiday season.

The consensus earnings estimate is for $0.76 per share on revenue of $2.22 billion; but the Whisper number is less at $0.52 per share.

Consensus estimates are for earnings to decline year-over-year by 43.28% with revenue increasing by 4.61%.

Short interest has increased by 72.7% and overall earnings estimates have been revised lower since the company's last earnings release.

At around $96 per share today, GME stock has taken a big dive from its meme high of $483 per share.

Best Buy said in a morning press release recently that fourth-quarter sales trends were slightly worse than management had predicted in late November.

The consumer electronics industry was pinched by supply chain shortages, the rise of the omicron variant of COVID-19, and declining demand for products in the video game niche compared to a year earlier. Each of those challenges likely affected GameStop over the holiday selling period, too.

Best Buy reported declining profitability for its fourth quarter and said that trend might persist at least into the first half of 2022.

GameStop didn't issue any short-term guidance in its last conference call back in early December, but most investors are looking for sales to rise about 4% to $2.2 billion. Hitting that result would put the company roughly in the same position it was back in 2019, although today it operates fewer stores and has divested a few unprofitable business lines.

Management said it believed it had enough inventory on hand to satisfy demand over the holidays. However, Best Buy (NYSE: BBY) and Walmart (NYSE: WMT) both revealed in recent earnings announcements that the video game segment underperformed in late 2021. The big question on Thursday will be whether GameStop struggled to grow in that weaker environment.

GameStop's rebound strategy starts with securing sustainable revenue growth as the foundation for solid financial returns. To date, investors haven't seen much to show that this initiative is paying off.

Operating cash losses over the first three quarters of 2021 were $324 million compared to $41 million a year earlier. GameStop burned through almost $300 million just in the third quarter, and the long-term trend appears to show steady deterioration on this key metric.

Heading into the report, most investors are looking for sales to fall slightly in the new fiscal year as gains in e-commerce and in new initiatives like non-fungible tokens (NFTs) and blockchain offset some of the loss from the shrinking store base.

If management's forecast is about the same, then shareholders are looking at a third consecutive year of annual sales below $6 billion. The company's record was over $9 billion in 2017.

A lot has changed in the video game industry since then, but one consistent trend has been GameStop's struggles to stay relevant to its fans as power shifted toward hardware and software developers and away from retailers. The pressure from that continued move will surely affect GameStop again through 2022. 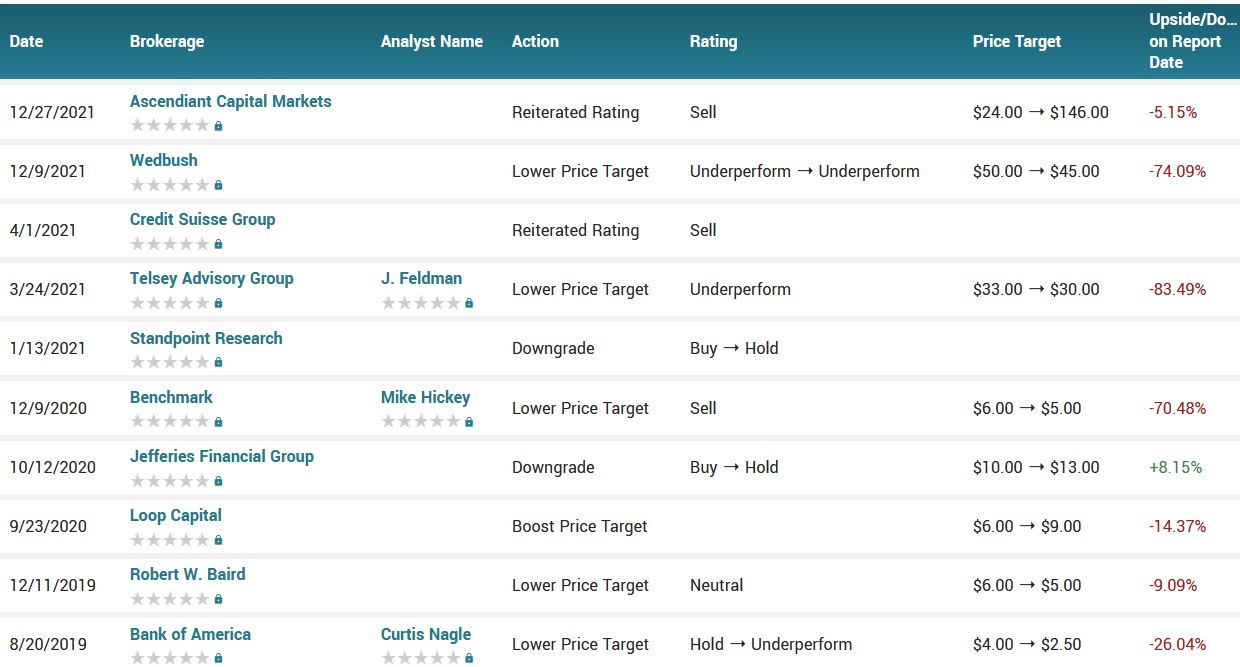 A Successful GameStop Trade Based On A Put Option!

What Further GameStop Weekly Trades Will We Recommend?

Back to Weekly Options USA Home Page from GameStop