Facebook has been a strong performer on the stock exchange since its 2012 initial public offering, and is well positioned to do even better. Several catalysts are working positively for the stock – earnings, ad rates, analyst’s positivity, little reaction to antitrust suits, and active growth with shops in its digital mall.

“Weekly Options Members” managed to gain a potential profit of 80% within the trading day.

Actual entry price was $5.68 at the open of the market.

(This was based around a note sent to members at the time of the recommendation -- NOTE: Again, keep a close eye on the stock today – if there is sufficient profit it would be advisable to exit sooner than later!)

TOTAL PROFIT FOR THE DAYS TRADING IS 80%. 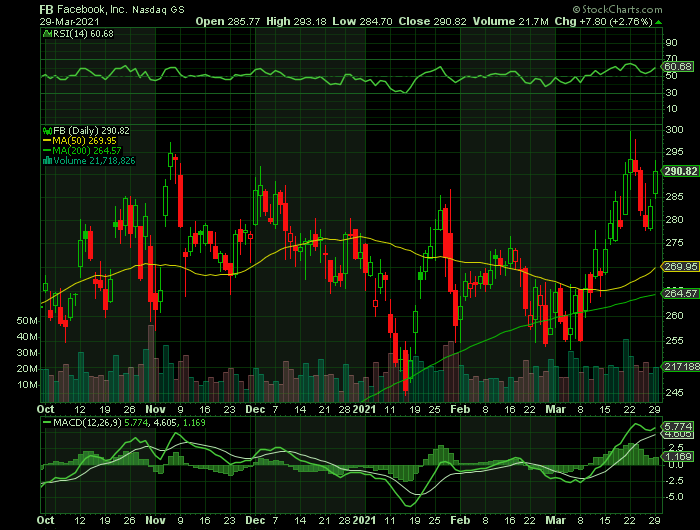 Facebook stock, after six mostly moribund months, has reawakened. The spark came last Friday, when Facebook CEO Mark Zuckerberg gave a rousing update on the social media giant's big e-commerce push. He also suggested that a new privacy measure from Apple, which is among investors' biggest worries, could actually be a blessing in disguise for Facebook.

FB stock and other big tech growth stocks whose earnings surged amid the pandemic have taken a back seat as vaccines and massive fiscal stimulus begin to rev up the rest of the economy. But Facebook's slump was particularly notable.

Facebook blew away Q4 earnings estimates on Jan. 27, posting its fastest revenue growth in more than two years. But FB stock suffered a nasty reversal the next day, despite a flurry of price-target hikes to as high as 360.

Facebook earnings easily surpassed fourth-quarter estimates. The FANG stock earned $3.88 per share, up 52% from a year ago and 69 cents ahead of the consensus. Revenue surged 33% to $28.1 billion.

The accelerating revenue growth came despite a further dip in daily active users in the U.S. and Canada to 195 million, down from 198 million in Q2. Facebook had previously warned that a spike in use of the social media app that occurred early in the pandemic would moderate as life normalized.

The bigger picture is that Facebook advertisers, a group that has grown to more than 10 million businesses, are using the social media site to connect with prospective customers like never before.

Q4's growth came as ad impressions served across Facebook properties grew at a slower 25% pace vs. a year ago. However, the average price per ad rose 5%, after falling 9% in Q3.

The rates Facebook draws for its advertising took a hit in 2020, buffeted by headwinds ranging from an industry slump alongside the COVID-19 pandemic to the "Stop Hate For Profit" campaign, which led hundreds of advertisers to boycott the platform last summer.

But those rates (measured in cost per thousand impressions, or CPM) have returned to pre-pandemic levels and are showing continued growth - back to business, as it were.

The cost of Facebook advertising is up 30% compared to mid-March 2020, data from Aisle Rocket show.

Rates are back at around $8/CPM, and back on the growth track: “Projections are showing that CPMs will continue to increase – and we are not even in the holiday season yet, where we typically see the highest CPMs on Facebook,” says Aisle Rocket's Jen Strojin, suggesting the rate could hit $11/CPM by late summer.

CPMs are a proxy for competition, analysts note, and so Facebook is now the beneficiary of more competitive advertisers who pulled back campaigns early in the pandemic, but are now making moves such as pivoting to e-commerce.

“Everybody wants back in the pool, because they want to get in on the pent-up demand and the recovery,” says Kenshoo's Chris Costello.

The Jefferies analyst said that tech is “off limits right now” as investors put more money into travel and airline stocks amid hopes of a strong economic recovery from the pandemic.

According to the analyst, valuation combined with the tech names could currently be frustrating a lot of investors.

Thill said that compared to other companies in the tech sector, Facebook is a “cheap name.”

On Dec. 9, the Federal Trade Commission and a group of state attorneys general filed separate antitrust cases alleging that Facebook's acquisitions of Instagram and WhatsApp were anticompetitive in nature and intended to bolster its monopoly position.

So far analysts are largely dismissing the possibility of a breakup.

"We continue to believe the likelihood of a breakup of FB is low (judges are typically loathe to undo transactions) and the sum of parts of the various segments is likely similar or greater than FB current valuation," Raymond James analyst Aaron Kessler wrote in a December note.

On the PressClub podcast on March 19, Zuckerberg announced that Facebook Shops, first announced last May, has more than 1 million active shops in its digital mall and 250 million shoppers, or at least browsers, per month.

Shops is Facebook's big effort to bring e-commerce purchases in-house, instead of just facilitating user-advertiser connections that result in off-site purchases. Businesses can set up a single shop for customers to access on both Facebook and Instagram.

Morgan Stanley analyst Brian Nowak said in a research note that the scale Shops has achieved in just 10 months"should give investors more confidence in the durability of FB's multiyear growth."

Nowak said Morgan Stanley's AlphaWise survey had previously suggested that about 30% of Americans are shopping on Facebook's Instagram site per month. Morgan Stanley has estimated $1.9 billion in annual revenue tied to Instagram Shops. Zuckerberg's disclosure "implies that the global contribution from Shops this/next year is likely to be larger than our ~$1.9bn annual estimate,"Nowak wrote.

It's dangerous to bet against FB stock, even as it faces a long antitrust battle and regulatory threats. Growth stocks could continue to face headwinds from rising interest rates. Yet Facebook has showed impressive agility with its well-timed e-commerce push.

That's according to a new analysis of the stock from analyst Lloyd Walmsley at Deutsche Bank, who has raised the target price of the shares to a new "street high."

Walmsley's new level is $385, from the previous $355. The former is more than 32% above Facebook's most recent closing price. He's maintaining his buy recommendation on the stock.

Walmsley believes that ad spending, a crucial source of revenue for the company, will see a rise.

"We think investor focus is starting to shift away from fears around iOS changes toward a continued ad recovery and benefits from more eCommerce activity shifting into Facebook's platform," Walmsley wrote in his research note explaining the price target hike.

Facebook already has a massive user base, so it can't rely on significant improvement in those numbers to drive its business forward. Rather, it will be reliant on expanding advertising take and other revenue sources for meaningful growth. Walmsley thinks that it has several levers it can pull for this, including the Tik Tok-like Reels video feature in Instagram. He's estimating that Reels can potentially pull in $21 billion in revenue.

Facebook has shaken off all sorts of political headwinds, sidestepping ferocious opposition from the conservative side of the aisle, and appears poised to break out in a major uptrend that could target 400.

Back to Weekly Options USA Home Page from Facebook Poised To Go Higher!