Members of “Weekly Options USA,” Using A Weekly Put Option,
Are Already  74% Potential Profit On The Day!
More to come!
Join Us and GET THE TRADEs!

Coinbase Global continues to struggle as cryptocurrency plunges lower. Bitcoin has plunged below $20,000 for the first time since 2020, as tightening monetary policy across the world prompts a flight from riskier assets.

More To Come – Still Not Too Late to Join The Profit Making! 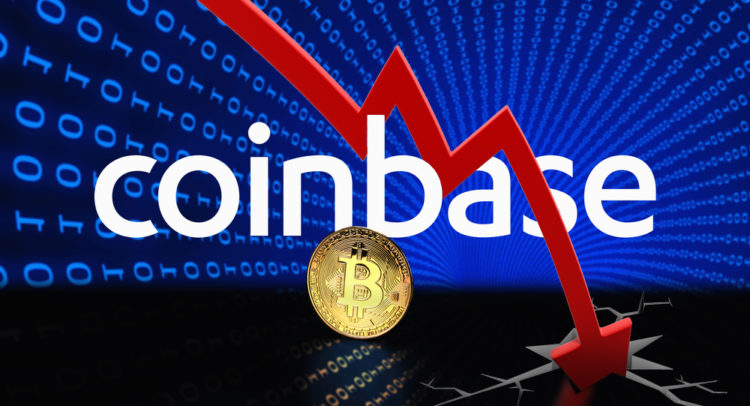 The downturn in the world's largest cryptocurrency, bitcoin, which has fallen below $20,000 from its record high of $69,000 hit in November, and other key players such as cryptocurrency exchange operator Coinbase Global Inc (NASDAQ: COIN) has set the stage for what is being termed as the “crypto winter”.

Short sellers, who bet on a stock's decline, have an average short interest of $3 billion on the sector.

Shares in Coinbase Global have dropped over 80% so far this year. Short interest as a percentage of the company's float stood at 15% for Coinbase Global.

"Shorting crypto stocks may continue to be a profitable trade," said S3 Partners' Ihor Dusaniwsky and Matthew Unterman. "Short sellers should not be blamed for near term downward price moves, but they may be an active participant in future rallies."

There has been $71 million worth of new short selling in crypto stocks so far this month, according to S3 Partners.

Reasoning Behind The COINBASE GLOBAL Recommendation....
(as presented to Weekly Options USA Members on Wednesday, June 15, 2022)

On Wednesday, June 15, 2022, we executed a Weekly Put Option on Coinbase Global providing members with a potential return of 74%.

Many of the catalysts mentioned at that time are still applicable today.

In the area of cryptocurrency Coinbase Global Inc (NASDAQ: COIN) is cutting its workforce by 18%, according to an 8-K filed by the company on Tuesday, as the crypto market continues to get hammered on expectations of more aggressive Federal Reserve interest rate hikes.

The reduction will shrink the company’s workforce by 1,100 employees to 5,000 in total by June 30, according to the filing.

The announcement adds to a litany of bad news for the crypto industry, with the total value of crypto assets dropping by 25% over the past month from $1.24 trillion to $929 billion as of Tuesday morning, according to Coinmarketcap.

"We appear to be entering a recession after a 10+ year economic boom. A recession could lead to another crypto winter, and could last for an extended period. In past crypto winters, trading revenue (our largest revenue source) has declined significantly," Coinbase Founder and CEO Brian Armstrong said in a blog post that announced the layoffs.

“We grew too quickly," Armstrong added.

Last month, Coinbase said it would slow hiring and rescind some job offers, a far cry from the company’s original goal at the beginning of this year to triple its headcount.

The layoffs announced on Tuesday will “incur approximately $40 million to $45 million” in restructuring expenses, according to the filing, but the company did not change the outlook it provided in May when reporting its most recent quarterly earnings.

"Coinbase has survived through four major crypto winters, and we’ve created long term success by carefully managing our spending through every down period," Armstrong wrote. "Down markets are challenging to navigate and require a different mindset."

About half of bitcoin holders using Coinbase Global as an exchange likely are facing losses, after the largest cryptocurrency fell to $20,834 late Monday, the lowest level since December 2020, according to analysts at Mizuho.

A Mizuho survey pegged the average cost basis for bitcoin holders on Coinbase Global at $21,000, based on a poll of 145 customers on the exchange. With the cryptocurrency falling below that figure, they estimate roughly half of holders surveyed would be facing losses.

Bitcoin has plunged below its current realized price of $23,430, according to data at Glassnode. The metric represents the average price of every bitcoin in supply, valued at the last time it was last spent on the blockchain.

Bitcoin rarely has dipped below its realized price “outside the deepest and latest stages of bear markets,” the Glassnode analysts wrote in a Tuesday note. The last instances when it dropped below such levels were in March 2020, and the end of the 2018-2019 bear market.

Meanwhile, Coinbase Global is estimated to have seen $220 billion of total trading volume of crypto for the second quarter, well below its $309 billion volume in the first quarter, analysts at Mizuho wrote in a Tuesday note.

They estimated average daily trading volume on Coinbase Global at $1.7 billion from June 1 to June 11. If recent weakness lingers through the end of the year, the company’s total volume in 2022 would be about $836 billion, potentially translating to $3 billion of revenue, or 30% below current consensus, the Mizuho analysts wrote.

The cryptocurrency rout comes against a backdrop of higher interest rates, as central banks wrestle to keep inflation under control. Earlier this week, the Bank of England raised interest rates from 1pc to 1.25pc. Inflation is running at a 40-year-high of 9pc and could hit 11pc later this year.

Alkesh Shah, head of crypto and digital assets strategy at Bank of America Corp, told clients that in this climate investors were shifting focus to projects with "clear road maps to cash flow and profitability versus purely revenue growth".

Edward Moya, senior market analyst at Oanda, added the recent news flow "has been terrible for cryptos". "Surging recession fears are crippling appetite for risky assets and that has crypto traders remaining cautious about buying Bitcoin at these lows."

The slump in prices is rippling across the crypto industry, with one of the world's largest companies in the sector Coinbase this week announcing plans to cut almost one in five roles, equal to around 1,100 jobs.

Brian Armstrong, the chief executive of the company, warned over what an economic downturn could mean for the industry. “We appear to be entering a recession after a 10-plus year economic boom. A recession could lead to another crypto winter, and could last for an extended period," he wrote to staff.

Coinbase Global lets people buy and sell Bitcoin and other cryptocurrencies. Its shares have fallen 85% since its flotation in New York in April last year, when it landed a $86bn valuation. 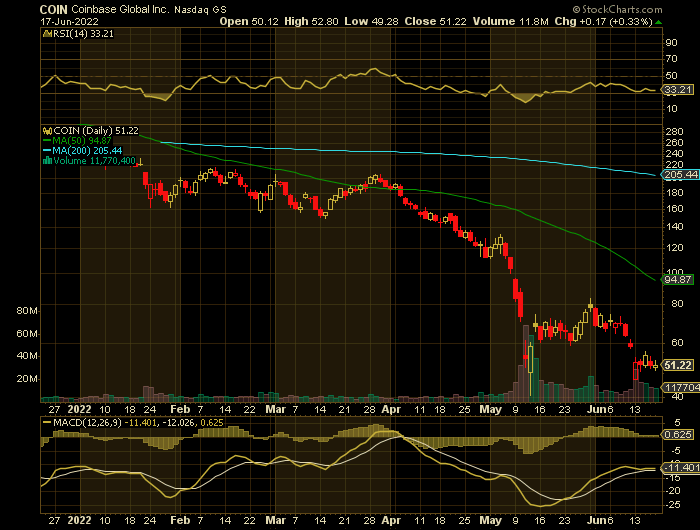 Back to Weekly Options USA Home Page from Coinbase Global