Members of “Weekly Options USA,” Using A Weekly put Option, Are Up 42%,
Due To The Loss of A Big Jet Order as Well as SEC Settlement for 737 Max Crisis.
More profit to come?
Join Us and GET FUTURE TRADEs!

Boeing Co made a big move to put part of its troubled past behind it, but the aerospace manufacturer has also apparently fallen out of favor with what had been a key customer in China.

Investors are disappointed, sending shares down nearly 5% in Friday trading and another 3% yesterday.

This set the scene for Weekly Options USA Members to profit by 42%, within the trading day, using a Weekly Put Option!

Why the Profit on Boeing Co Stock?

China Southern Airlines said on Thursday that it is turning to Boeing Co.'s (NYSE: BA) European rival Airbus SE for its next big jet order, in a major win for Airbus.

The order for 40 A320neo family aircraft, worth about $4.85 billion, will be delivered to China Southern Airlines subsidiary Xiamen Airlines between 2024 and 2027. Xiamen has previously relied solely on Boeing jets, but the switch reinforces Boeing's negative outlook for selling more planes in China over the next few years.

China Southern Airlines and Airbus announced the deal the same day the Securities and Exchange Commission said it had reached a settlement with Boeing and former CEO Dennis Muilenberg over allegations the company misled investors about the safety of the 737 Max. Boeing was hit with $200 million in fines, while Muilenberg will have to pay $1 million.

The stock has declined 31% so far this year.

The Boeing Company is the world’s largest manufacturer of airplanes and commands more than 50% of the market in some channels and categories. The company and its family of subsidiaries design, develops, manufacture, sell, service, and supports commercial jetliners, military aircraft, satellites, missile defense, human space flight, and related services worldwide. The company operates through four segments including Commercial Airplanes; Defense, Space & Security; Global Services; and Boeing Capital providing products and services to end-users in 150 countries.

Boeing got its start in 1910 when William E. Boeing developed a love for aircraft. Soon after he takes his first plane ride which leads him to build a hangar and begin construction of his first plane. The onset of WWI helped spur the company’s growth but business was cut drastically in its wake. The start of WWII was another milestone for the company and one that led to its current position of dominance. The company was incorporated in 1916 and is based in Chicago, Illinois. Boeing employs over 140,000 people in 65 countries making it one of the most diverse employers on the planet.

The Commercial Airplanes segment is built around the iconic 7-series which includes the 737, 747, and 787. The segment provides commercial jet aircraft for passenger and cargo requirements, as well as fleet support services for regional, national, and international air carriers and logistics and freight companies. In terms of global volume, the company estimates about 90% of all air freight is carried aboard one of its jets. This segment also includes the Dreamliner family of planes. The Dreamliner is a game-changing airplane for many carriers as it opens up the potential for new one-stop destinations because of its capacity and range.

The Defense, Space & Security segment develops and manufactures a range of systems including manned and unmanned aircraft, missiles, missile defense systems, satellites, communications equipment, and intelligence systems for governments. Among the many iconic brands within this segment are the AH-64 Apache, Air Force One, B-52, C-17 Globemaster, Chinook, F/A-18, and the V-22 Osprey VTOL aircraft used by the Marines.

The Global Services segment offers a range of products and services that include supply chain and logistics management, engineering, maintenance, upgrades, conversions, spare parts, pilot and maintenance training, technical and maintenance documents, and data analytics to its commercial and defense customers.

Boeing is also a leader in innovation, leveraging its many decades and avenues of experience to further aerospace and defense technology. Among the many innovations is the MQ-25 Stingray which will be the world’s first autonomous aircraft. The Stingray is only one of many areas of research that also include drones and undersea vehicles.

Boeing Co has settled a Securities and Exchange Commission probe into its handling of the 737 MAX crisis.

The company's 737 MAX, which was once billed as having the potential to be the top-selling aircraft of all time, was involved in fatal crashes in 2018 and 2019 that led to the plane being grounded for 18 months and prompted a comprehensive review of Boeing's engineering and safety practices. The company is still feeling the impact of that review, with the 787 Dreamliner only recently cleared by safety regulators.

The pandemic added to Boeing's woes, cutting demand for new aircraft. But with the 737 MAX flying again and airlines beginning to rebound post-pandemic, Boeing is trying to get airborne again.

Late Thursday, the Securities and Exchange Commission announced a settlement with Boeing and former CEO Dennis Muilenburg relating to charges that the company and its management misled investors about the 737 MAX. As part of the settlement, Boeing will pay $200 million in fines, and Muilenburg will pay $1 million.

“We have made broad and deep changes across our company in response to those accidents—fundamental changes that have strengthened our safety processes and oversight of safety issues, and have enhanced our culture of safety, quality, and transparency,” Boeing said in a statement, referring to the two 737 Max crashes. Muilenburg didn’t immediately respond to a request for comment.

Boeing (BA -5.37%) made a big move to put part of its troubled past behind it, but the aerospace manufacturer also apparently has fallen out of favor with what had been a key customer in China. Investors are disappointed, sending shares down nearly 5% in Friday trading. This downward movement is likely to continue for the short-term.

On Friday, Boeing investors woke to another piece of bad news. Archrival Airbus (EADSY -2.07%) announced that China's Xiamen Airlines, which until now has been an all-Boeing operator, has placed an order for 40 Airbus A320neo aircraft. Xiamen's major shareholder, China Southern Airlines, is perhaps Boeing's most important customer in the region, and the Airbus deal demonstrates the challenge Boeing is facing selling planes in China.

The Xiamen order is a warning that Boeing seems to be losing pace, and market share, in the all-important narrow-body jet market.

Boeing shared plans to cut 150 finance jobs in the U.S. in 2022 to streamline its corporate structure and focus more resources on manufacturing and product development.

Boeing would reduce staffing in its information technology and finance departments, Reuters reported citing an email from the company.

Boeing ramped up its workforce by 10,000 employees earlier this year and its engineering and manufacturing departments to respond to the market demand.

A week of heavy selling has rocked U.S. stocks and bonds, and many investors are bracing for more pain ahead.

Wall Street banks are adjusting their forecasts to account for a Federal Reserve that shows no evidence of letting up, signaling more tightening ahead to fight inflation after another market-bruising rate hike this week.

With the Fed intent on raising rates higher than expected, "the market right now is going through a crisis of confidence," said Sam Stovall, chief investment strategist at CFRA Research.

If the S&P 500 closes below the mid-June low in the days ahead, that may prompt another wave of aggressive selling, Stovall said. This could send the index as low as 3,200, a level in line with the average historical decline in bear markets that coincide with recessions.

While recent data has shown a U.S. economy that is comparatively strong, investors worry the Fed's tightening will bring on a downturn.

A rout in bond markets added pressure on stocks. Yields on the benchmark 10-year Treasury, which move inversely to prices, recently stood at around 3.69%, their highest level since 2010.

Higher yields on government bonds can dull the allure of equities. Tech stocks are particularly sensitive to rising yields because their value rests heavily on future earnings, which are discounted more deeply when bond yields rise.

Investors were reacting to the Federal Reserve’s commitment to its rate hiking plan to help tame inflation. At the conclusion of the FOMC meeting, chair Jerome Powell said the central bank could raise rates as high as 4.6% before pulling back. The forecast also shows the Fed plans to stay aggressive this year, hiking rates to 4.4% before 2022 ends.

“A lot of traders expected hints of a Fed pivot at Jackson Hole or at the September FOMC policy, but that never happened,” said Edward Moya, senior market analyst at Oanda. “A hard landing is becoming the base case scenario for many and that means more economic pain along with a much weaker stock market is coming.”

“How far we go below the summer lows is anyone’s guess,” said Oanda’s Moya. “It doesn’t seem like any economic data release or Fed speak will convince markets that a downshift from this aggressive tightening campaign will be happening anytime soon.”

Michael Hartnett, chief investment strategist at BofA Global Research, believes high inflation will likely push U.S. Treasury yields as high as 5% over the next five months, exacerbating the selloff in both stocks and bonds.

"We say new highs in yields equals new lows in stocks," he said, estimating that the S&P 500 will fall as low as 3,020, at which point investors should "gorge' on equities.

"Based on our client discussions, a majority of equity investors have adopted the view that a hard landing scenario is inevitable," wrote Goldman analyst David Kostin.

Kevin Gordon, senior investment research manager at Charles Schwab, believes there is more downside ahead because central banks are tightening monetary policy into a global economy that already appears to be weakening.

"It will take us longer to get out of this rut not only because of slowdown around the world but because the Fed and other central banks are hiking into the slowdown," Gordon said. "It's a toxic mix for risk assets."

“Selling is becoming indiscriminate,” wrote Keith Lerner, co-chief investment officer at Truist Advisory Services. "The increased probability of breaking the June S&P 500 price low may be what it takes to invoke even deeper fear. Fear often leads to short-term bottoms."

A key signal to watch over the coming weeks will be how steeply estimates of corporate earnings fall, said Jake Jolly, senior investment strategist at BNY Mellon. The S&P 500 is currently trading at around 17 times expected earnings, well above its historical average, which suggests that a recession is not yet been priced into the market, he said.

"The only way we see earnings not contracting is if the economy is able to avoid a recession and right now that does not seem to the odds-on favorite," he said. "It's very difficult to be optimistic on equities until the Fed engineers a soft landing." 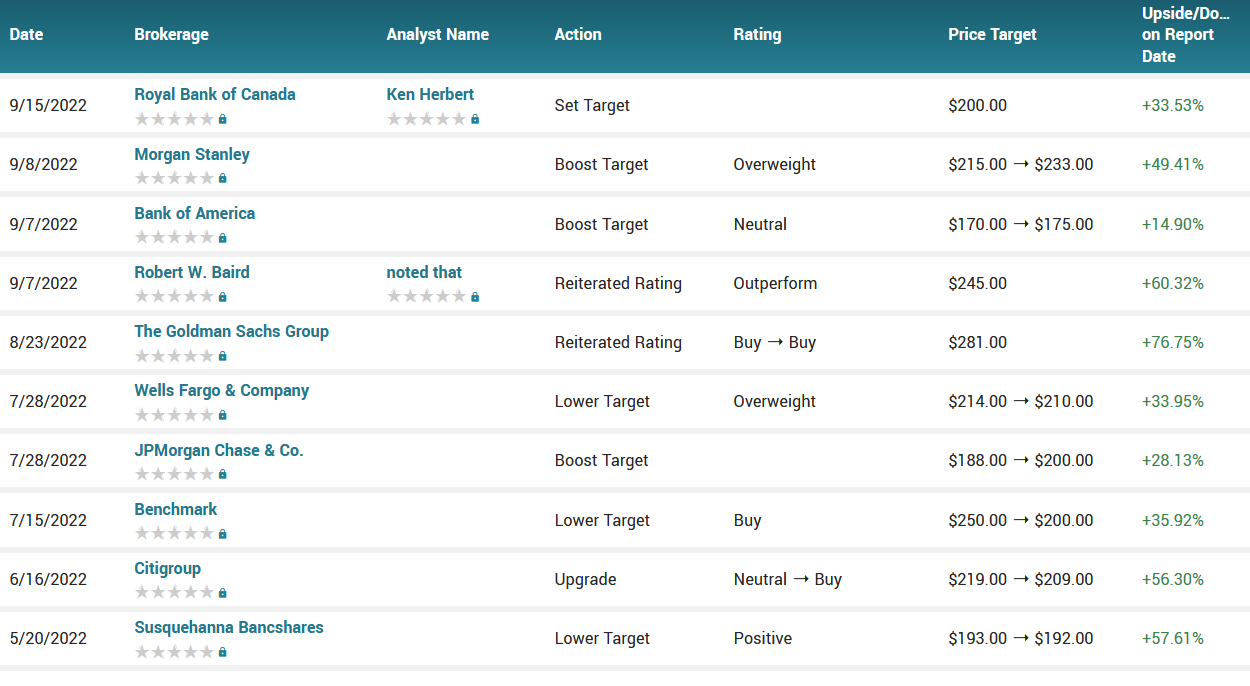 According to the issued ratings of 17 analysts in the last year, the consensus rating for Boeing stock is Moderate Buy based on the current 2 hold ratings and 15 buy ratings for BA. The average twelve-month price prediction for Boeing is $218.07 with a high price target of $281.00 and a low price target of $175.00.

Heading into the final week of trading for September, the Dow and S&P 500 are each down about 6% for the month, while the Nasdaq has lost 8%. 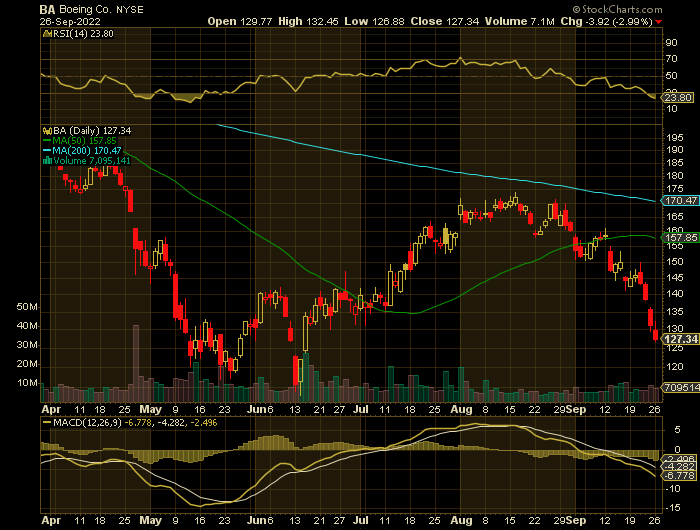