Members of “Weekly Options USA,” Using A Weekly put Option, Are Up 28%,
Due To Resistant Fears Of A Business Downturn Versus Other Digital Payment Companies.
More profit to come?
Join Us and GET FUTURE TRADEs!

Block Inc (NYSE: SQ) stock may be set for a downturn versus other digital payment companies.

Also, the price of Bitcoin has again dropped below a key level of $20,000.

This set the scene for Weekly Options USA Members to profit by 28%, in as little as 25 minutes, using a Weekly Put Option! 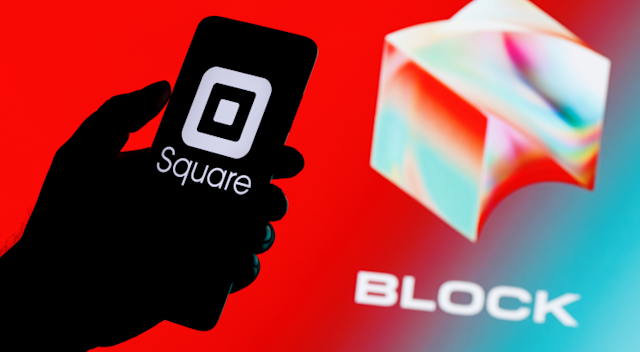 Why the Profit on Block Inc Stock?

Amid rising fears of a U.S. recession, one question is how resistant Square-parent Block Inc (NYSE: SQ) will be to a business downturn versus other digital payment companies. Also, the price of Bitcoin has again dropped below a key level of $20,000.

The company also provides Square Point of Sale software; Cash App, which provides access to the financial system, allowing customers to electronically send, store, and spend money; Caviar, a food ordering platform for restaurants to offer food ordering, pickup and delivery, to their customers; and Square Capital that facilitates loans to sellers based on real-time payment and point-of-sale data.

Square, Inc. was founded in 2009 and is headquartered in San Francisco, California.

In Q2, Square earnings were 18 cents per share on an adjusted basis, down 72% from the year-earlier period. Analysts had projected earnings of 16 cents a share.

"The company has pulled back on experimental and less efficient spend, along with adjusting its risk loss modelling and slowing the pace of hiring," Deutsche Bank analyst Bryan Keane said in a note to clients. "Due to scale and a new cost discipline focus, we believe SQ stock is positioning for material margin expansion in 2023 and 2024."

Square on Dec. 1 changed its name to Block, while retaining the ticker SQ. In part, the move reflected the company's commitment to blockchain technology, which underpins cryptocurrency. SQ stock has dropped 72% since the rebranding to Block.

Announced Aug. 1, the Afterpay deal was originally valued at $29 billion. With the big drop in Block stock, the deal was valued at less than $15 billion at closing.

Afterpay competes in the emerging "buy now, pay later" market that encroaches on credit card networks. Apple (AAPL) has emerged as a rival to Afterpay. Another rival of Afterpay is Affirm Holdings (AFRM).

Some investors questioned whether Block needed to buy a company in this sector as opposed to building up its own capabilities or partnering. Competition is heating up in the buy now, pay later market.

Block's 2022 guidance includes an expected $1 billion in Afterpay operating expenses. UBS analyst Rayna Kumar in a report said the "risk profile" of Afterpay has changed amid rising interest rates and the potential of increased regulation.

What's more, Apple (AAPL) on Feb. 8 said it's rolling out a new iPhone app. The new app will turn iPhones into a point-of-sale terminal. The service will allow merchants to accept contactless credit or debit cards. And, Apple is moving into the buy now, pay later market.

Square disclosed a new $170 million investment in Bitcoin in early 2021 on top of its $50 million purchase in October 2020. The company reports Bitcoin holdings as unrealized gains on investments, and they will be excluded from adjusted earnings, analysts say.

The company also is interested in developing a Bitcoin hardware wallet.

Cash App users are able to buy, hold and sell Bitcoin. Square's adjusted revenues from Bitcoin are sales to app users, minus the cost of purchasing the digital currency.

But Square's Bitcoin business has gross profit margins of only around 2%, analysts say.

At Mizuho Securities, analyst Dan Dolev downgraded Block stock on Sept. 22 to neutral. They now have a $57.00 price target on the stock, down previously from $125.00.

"After years of rightfully being deemed the most innovative name in payments, we believe user fatigue, plateauing inflows, loss of the best-of-breed POS status, and BNPL mis-execution are blocking SQ's growth," Dolev said in a report.

"SQ still has enormous potential, but it is not being realized. Instead, BNPL estimates continue to come down and projects like Bitcoin — which accounts for 5% of gross profit — seem to disproportionately preoccupy management's attention," he added.

Also, SMBC Nikko downgraded Block (NYSE:SQ) to Neutral as a number of crosscurrents clouds its near- to medium-term prospects.

The firm believes that the company is one of the highest quality long-term names in its fintech coverage, but pointed to Block's (SQ) "hard-to-quantify, but material crypto exposure, lack of medium-term visibility, and uncertainty around the potential impact of SQ's more conservative investment strategy on medium-term growth." Note Block's (SQ) guidance in August reduced its planned investments for 2022.

The company's analyst sees the knock-on impact of crypto more important than its Cash App bitcoin (BTC-USD) revenue. For example, a Cash App user buying $100 of bitcoin when the price was $10K and selling at $60K would result in $500 of Cash App inflows. That could then increase Cash Card spend, instant deposit and stock trading.

"Unfortunately, now that the price of bitcoin (BTC-USD) is ~70% off its highs, we suspect the inverse dynamic is underway," the SMBC Nikko analyst wrote in a note to clients.

Recently, the crypto sensitivity has been "somewhat masked" by increased instant transfer pricing, Cash App borrowing, and tailwinds from Cash App tailwinds. "That said, we think this creates a high bar for Cash App in the quarters ahead and suspect any hiccup in results will put further pressure on shares," the note said. 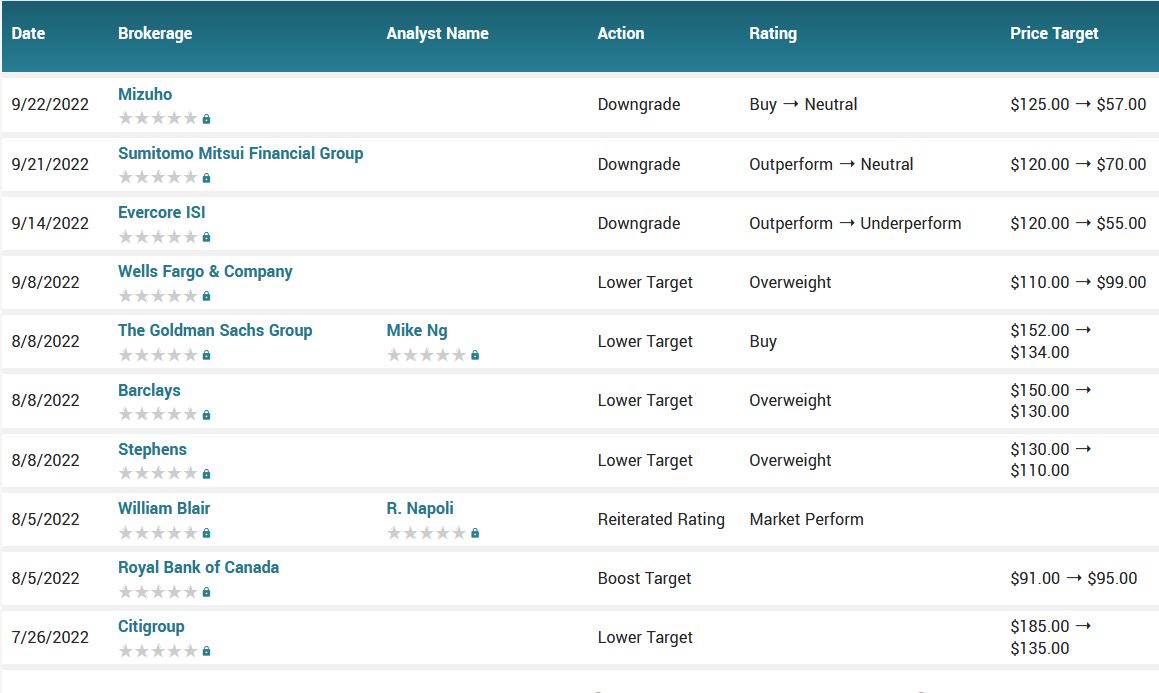 According to the issued ratings of 40 analysts in the last year, the consensus rating for Block stock is Moderate Buy based on the current 1 sell rating, 7 hold ratings and 32 buy ratings for SQ. The average twelve-month price prediction for Block is $135.76 with a high price target of $310.00 and a low price target of $55.00.

Block stock disappointed in 2021, especially in the back half of the year.

Square has wrestled with finding the right balance of revenue growth, investments and profitability.

Block's stock has struggled enormously this year and is down more than 65%. In its most recent quarterly earnings report, Block reported a net loss of about $208 million, which is in stark contrast to the $204 million profit it reported in the second quarter of 2021. Gross payment volume grew almost $10 billion from the year prior but came in below what analysts had been expecting. 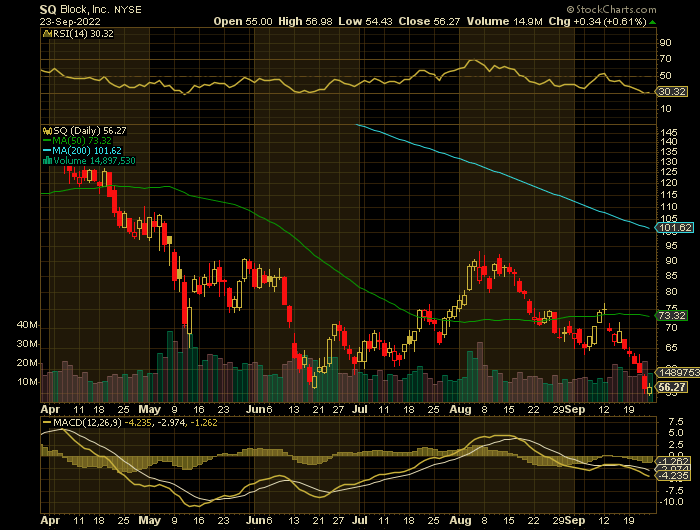