See What Trade Members of Weekly Options USA
Have Executed!
still time to join and profit!

Apple Inc delivered strong growth on both sides of its business in the most recent quarter.

Over the years, Apple has captivated consumers with its sleek devices, cultivating an incredible brand image in the process.

But the company is more than trendy products. Its iOS operating system strategically reinforces its brand authority, creating an ecosystem that's hard to replicate.

Despite its $2.8 trillion market cap, Apple is well positioned to create wealth for shareholders.

Over the years, Apple Inc. (NASDAQ:AAPL) has captivated consumers with its sleek devices, cultivating an incredible brand image in the process. But the company is more than trendy products. Its iOS operating system strategically reinforces its brand authority, creating an ecosystem that's hard to replicate. Unlike Android, iOS is closed-source, meaning third-party manufacturers cannot integrate the software into their own devices to provide an Apple-like experience at a lower price point. That gives Apple significant pricing power and a great degree of control over its ecosystem.

To that end, Apple's lineup of trendy devices -- iPhones, iPad, Macs, and various wearables -- creates two opportunities for monetization. The first is by selling the devices themselves, and the second comes from providing services to those devices. That comprises payments services like Apple Pay, cloud services like iCloud, and App Store purchases, which itself includes subscription services like Apple Fitness+, Apple TV+, and Apple Arcade.

Despite supply chain headwinds, Apple Inc delivered strong growth on both sides of its business in the most recent quarter.

Mac has been on a tear since the pandemic took hold and lockdowns, work-from-home, and online schooling became a thing. Apple CEO Tim Cook addressed the strong sales during the company's first-quarter earnings call in response to a question from Cross Research analyst Shannon Cross.

"Mac set an all-time revenue record at $10.9 billion for the quarter. That was up 25%. And as you point out, the last six quarters for the Mac have been the top six revenue quarters of all time," he said. "And what's further very good about this is, we set all-time revenue records in Americas, in Europe, and the rest of Asia Pacific. And we set a December quarter record in Greater China. And so it's not narrowed to a particular geographic area that we're doing well in. It's almost -- about almost across the board."

Shares of Apple Inc have outperformed the S&P 500 over the past year (+27.8% vs. +19.3%), with the block-busted December-quarter results expected to help sustain the stock's momentum despite the ongoing market volatility.

Although Apple Inc had warned back in October that the ongoing chip shortage was likely to hurt holiday sales, it fared better than expected as all its products, barring the iPad, saw sales grow.

At the Worldwide Developer Conference in June 2019 the Cupertino, Calif.-based company began offering Mobile Device Management. The software tool lets IT managers assign a corporate Apple ID that lives side by side with an employee’s personal ID; has a cryptographic separator for personal data; and limits the device-wide capabilities. The latter is perfect for employees who decide to bring their own devices to work. The response has been remarkable.

When large companies offer devices to employees, iPhone is the overwhelming smartphone of choice. Although the device commands only 15% of the global smartphone market, its use in the corporate world is without rival. From Capital One (COF) and International Business Machines (IBM), to Procter of Gamble (PG), iPhones are ubiquitous across the Fortune 500. It all makes good sense.

iPhone is considered a premium device. Getting one for work is a perk for employees. It’s also an easy sale to employers given iPhone’s reputation for longevity, software updates and privacy.

Then there is the halo effect.

iPhone is the center of the Apple Inc ecosystem. iPads, Mac computers, Watches and AirPods all work seamlessly within the iPhone platform.

Before the pandemic, personal computer (PC) sales declined steadily from a peak of 365 million globally that year to a low of 260 million in 2018. That number jumped a bit to 263 million in 2019, but 2020 represented a true comeback as 275 million PCs were sold.

That's a bounceback, but it's still well off the 365 million peak. However, it does return the industry to roughly where it was in 2007. Sales, of course, recovered because the Covid-19 pandemic increased demand.

More people worked from home and kids had remote school. Those two things forced a lot of families to buy new computers since multiple members of the household needed access to a PC at the same time.

This led to a bump in sales for Apple's Mac that has been sustained for quite a while.

While the pandemic has pushed PC sales up overall, Cook does not think that's the main driver for Mac sales. Instead, the CEO credits his company taking chip production in-house in order to improve performance.

"The response is very much because of M1. And we got even more response with the MacBook Pro that we launched in the -- during the Q1 time frame," he said. “[It's] both the upgraders, which we had a record number of upgraders for the December quarter, but also in markets like China -- six out of 10 sales are people new to the Mac. And so it's powered by both upgraders and switchers."

The CEO also noted that consumers really like the new computers and that could further drive sales.

"Customer satisfaction is off the charts. And so what I see this as is a product that will be very successful in a number of different markets from education to business, to the creative industry and in all geographic markets," he said, "We're not limiting ourselves."

Cook expects Apple's supply chain challenges to improve in the coming quarters. That should allow the tech giant to sell even more phones and computers and broaden its installed base of users, which already stands at an incredible 1.8 billion devices.

Apple's pivot to services has been a mixed bag, and the company is looking to expand the appeal of its Apple News service to a wider swath of free and paid subscribers. This week, the company rolled out a local newsletter in the San Francisco Bay Area, bringing bundled local news curated by the Apple team.

The purchase of AI Music, a London-based business founded in 2016, was completed in recent weeks. The company had about two dozen employees before the deal.

Technology developed by AI Music can create soundtracks using royalty-free music and artificial intelligence, according to a copy of its now-defunct website. The idea is to generate dynamic soundtracks that change based on user interaction. A song in a video game could change to fit the mood, for instance, or music during a workout could adapt to the user’s intensity.

Morgan Stanley’s Katy Huberty applauds “one of the cleanest quarters in recent memory,” particularly noting the strong growth displayed by the Mac and Services. The analyst says the results “illustrate the strength and stability of Apple's product and services ecosystem, a clear differentiator in a more difficult market environment.”

That is particularly evident when coupled with the “stronger-than-anticipated” March quarter guide, which the company delivered despite the ongoing - albeit easing - supply constraints, and hard-to-match year-over-year comps.

By Huberty’s calculations, the March quarter outlook will lead to revenue growth of around 5% year-over-year. This suggests a sequential growth drop of 24%, which is better than “pre-COVID seasonality” of -31%. “Importantly,” says Huberty, “This also takes into account continued chip shortages, which we see as a potential source of upside in the event supply improves more than expected.”

What this indicates is that despite the continued headwinds, management expects the current quarter’s performance to be “above seasonal strength.”

On top of that, there’s the June quarter’s anticipated launch of the iPhone SE3, which is likely to provide a boost in F3Q quarter as well. As such, Huberty increased her FY22 revenue growth forecast from 6% year-over-year to 8%.

Taking a step back, Huberty believes the results will probably “refocus investors on the longevity and durability of Apple's 1.1 billion, and growing, user base.” Factor in a “robust innovation engine,” for which over the next 3 years, the 5-star analyst anticipates R&D will increase at a 17% CAGR and provide the basis for a “growing pipeline of new products and services.” This all implies there still is plenty of room to grow both hardware and services spend per user. 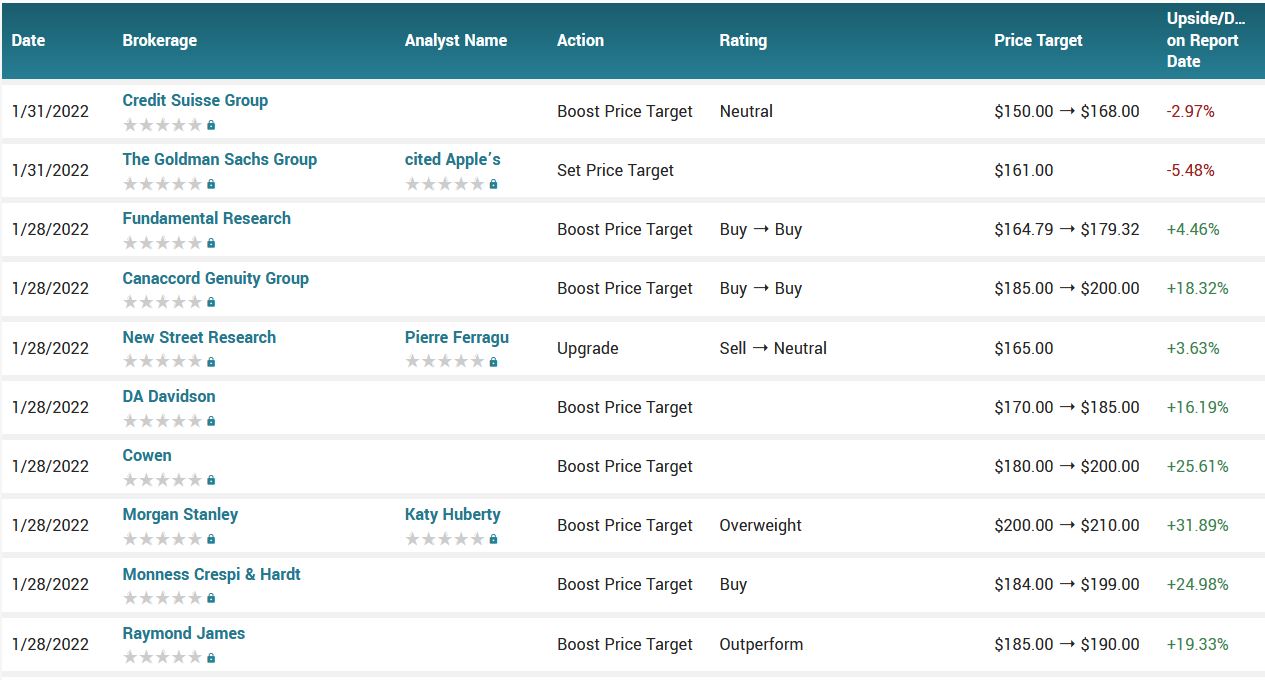 Despite its $2.8 trillion market cap, Apple is well positioned to create wealth for shareholders. Its tremendous brand authority should fuel consumer demand and its expanding services business should help the company better monetize its installed user base.

Also, with Wall Street feeling skittish about unprofitable growth stocks; now looks like a good time to add Apple -- a company that generated $93 billion in free cash flow over the past year. 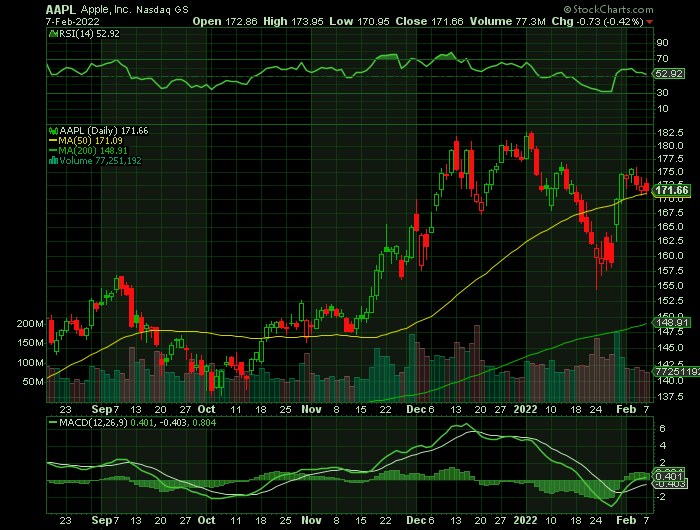 What Weekly Trades Will We Recommend For Apple Inc?

Back to Weekly Options USA Home Page from Apple Inc