Members of “Weekly Options USA,” Using A Weekly put Option,
Are Up 208% Due To An Analyst Cutting His Growth Estimates For The Next Three Years On AMD.

Wells Fargo analyst cut his growth estimates for the next three years on AMD shares, citing weakening demand in the PC market that might spill over to the data center market, a key driver of growth for the chipmaker, providing for an Advanced Micro Devices Weekly Options Trade.

Why the Profit on Advanced Micro Devices Weekly Options?

Wells Fargo analyst Aaron Rakers cut his growth estimates for the next three years on Advanced Micro Devices, Inc. (NASDAQ AMD) shares, citing weakening demand in the PC market that might spill over to the data center market, a key driver of growth for the chipmaker.

The fears of inflation and rising interest rates have sent this growth tech stock down 53% year to date.

Obviously the results will vary from trader to trader depending on entry cost and exit price that was undertaken. There is also another strategy that could have been implemented to produce even greater gains – see below.

Total profit using this strategy is 434%.

In AMD's last earnings call in early August, CEO Lisa Su mentioned that the company's next-generation 5-nanometer Genoa server central processing unit (CPU) was experiencing very strong customer pull. But this was two months ago, and the demand trends might have deteriorated since then.

The market intelligence firm International Data Corporation forecast PC shipments to be down 12.8% in 2022, with most of this decline coming from consumer and public sector markets. Not surprisingly, the enterprise market, which can afford to keep investing in products during recessions, is only expected to experience a 1.6% decline in PC shipments.

Su said that AMD is on track to launch the new server CPU later this year, positioning the data center business for "continued growth and share gains."

Mizuho analyst Vijay Rakesh saw the potential for a Yangtze Memory Technologies Co ban and expanding restrictions from AI or GPUs to include compute/memory, happening in short order.

Based on checks from his Washington team, the analyst believes expanded restrictions could happen soon.

There could be expanded restrictions from AI or GPUs to include compute, CPU, and data center, an increased negative to Advanced Micro Devices.

Although AMD offers a diverse business with multiple well-performing segments, investors might need to prepare for a slight dip in its Client segment over the next few months. The dip might come on the back of a lackluster response to its new lineup of processors (CPUs). On Aug. 30, the company announced its new generation of CPUs, the Ryzen 7000-series. The release is AMD's biggest processor refresh since the introduction of its Ryzen 1000-series in 2017. As a result, the 7000-series requires consumers to replace several components of their PCs to utilize the newest tech.

PC users looking to purchase AMD's new processors will need to upgrade to the company's recently released AM5 motherboard and to DDR5 ram. As consumers tend to upgrade PC components in stages, AMD's generational shift comes with a hefty price tag, as it's necessary to upgrade all three simultaneously.

The company's 7000-series has consumers criticizing it as too expensive, especially with the need to upgrade the other components. Additionally, Intel has stepped in with a new lineup of processors -- its 13th-gen Raptor Lake series -- that offers more total cores and higher clock speeds at lower price points than AMD.

Consequently, consumers are eyeing Intel's upcoming CPUs while also considering AMD's previous 5000-series released in 2021 rather than the 7000-series. It's too soon to know how badly AMD's revenue would be affected by consumer sentiment, but its Client segment is the best performing part of its business, so a dip is certainly possible.

The Fed’s aggressive monetary policy stance has significantly weighed on investors’ sentiment this year. With the Fed hinting at further rate hikes in the upcoming months, the odds of a recession have increased.

The stock market has had a wretched year due to various macroeconomic and geopolitical headwinds. The Fed’s aggressive interest rate hikes have failed to bring the surging inflation under control so far.

August’s Consumer Price Index (CPI) rose 8.3% year-over-year, beating the market’s expectations. This prompted the Fed to announce the third consecutive 75-basis-point rate hike in September. This, along with the upward revision of the key rate estimate for this year, has raised concerns over an economic downturn.

Fed officials predict that the key rate will end this year between 4.25% to 4.5%, up from the previously predicted range of 3.25% to 3.5%. Since this is expected to hurt businesses significantly by making borrowing expensive, the major market indexes tumbled last month.

Tech stocks have fallen out of favor in 2022, evident by the Nasdaq-100 Technology Sector Index falling 39% since January. Significant declines in consumer demand have hit the PC market hard and spooked investors, leading stocks of companies such as Advanced Micro Devices to sink 56% year to date. 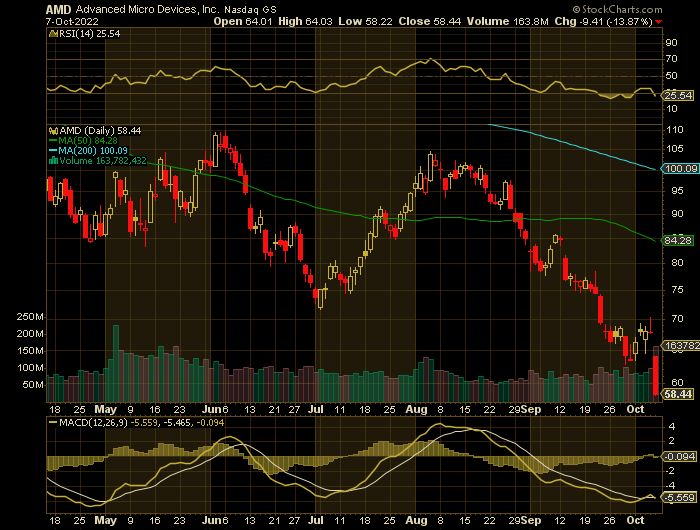