Apple Is A Great Defensive Play!

“Weekly Options” Members Profit Up 59% In 3 Hours!
Another Opportunity Arises?!

Apple continued to defy the law of large numbers by boosting its multitrillion-dollar market capitalization with shares up almost 3% early Wednesday afternoon, sending the iPhone maker's market capitalization toward $2.8 trillion. It is impressive by the way that the company has managed to grow, with ongoing evolutions of popular product lines and newer rollouts that are starting to gain traction.

And “Weekly Options” Members Profit Up 59% In 3 Hours!

Another trade seems to be feasible after a pullback!

On Wednesday, December 01, 2021, an Apple Inc. Weekly Options trade was recommended to our members based on several catalysts.

Then, shares of Apple were up almost 3% early Wednesday afternoon, sending the iPhone maker's market capitalization toward $2.8 trillion. It is impressive by the way that the company has managed to grow, with ongoing evolutions of popular product lines and newer rollouts that are starting to gain traction.

Apple seems to enjoy a special status among investors. On one hand, the company is fully participating in the digital revolution, with its 5G-capable smartphones leading to a renewed interest in upgrading that has pulled forward considerable revenue entering into the holiday season.

A report from China suggesting strong demand for the latest iPhone models gave shareholders a new sense of optimism that Apple can grow even in what has sometimes been a hostile market.

The stock pulled back in afternoon trading allowing traders to re-enter the weekly options trade for about $3.00.

Apple stock closed up 3.1% on Tuesday, at all-time highs at $165.30, as other stocks tumbled on concerns of the new omicron Covid variant, showing investors see the company as a safe haven during market uncertainty.

Some analysts have also noted the company's impressive cash flows would help it weather any future downturn.

The stock's upward movement came on the same day Fed Chair Jerome Powell indicated the Federal Reserve would talk about the possibility of accelerating its tapering program at its next FOMC meeting in a move to combat inflation. Powell also indicated that it's time to "retire" the word 'transitory' when talking about inflation.

Apple’s fourth quarter, which wrapped up in September, saw revenue shoot up 29% to $83.4 billion.

Shares of Apple are up about 25% for the year.

Apple, Inc. engages in the design, manufacture, and sale of smartphones, personal computers, tablets, wearables and accessories, and other variety of related services.

The company was founded by Steven Paul Jobs, Ronald Gerald Wayne, and Stephen G. Wozniak in April 1976 and is headquartered in Cupertino, CA.

The Major Catalysts for the Apple Inc. Weekly Options Trade…..

Shareholders no doubt appreciate Apple's tremendous profit and cash flow generation, as well as its fortress-like balance sheet. The iPhone maker produced a staggering $95 billion in net income and $93 billion in free cash flow over the past 12 months. It also has a staggering $190 billion in cash and investments in its coffers.

This unrivaled financial fortitude makes Apple able to withstand even the worst market downturns, while continuing to reward its shareowners with massive stock repurchases and a steadily rising dividend income stream.

Moreover, Apple has some promising long-term growth initiatives that could propel its stock to even greater heights. The tech leader is reportedly working on some intriguing virtual and augmented reality projects, as well as a self-driving car venture. When combined with its highly regarded chip development efforts for its iPhones, Macs, and iPads, Apple's bold new bets suggest that technological innovation is alive and well in this now $2.7 trillion behemoth.

Last week, Apple shares got a boost from reports that the company is planning to build an electric car with autonomous driving capability and also has an augmented reality headset in the works -- one that will be powerful enough to work as a stand-alone device. No smartphone required.

Over the weekend, Bloomberg expanded on these reports, adding that Apple is also working to develop augmented reality (AR) glasses (i.e., something different from the headset) and predicting that consumers (and investors) might get their first look at the AR headset as early as June 2022 if the company decides to unveil it at Apple's planned Worldwide Developers Conference next June.

Wharton’s Jeremy Siegel warns that stocks could drop 10% as soon as December — so hold fast with the ‘conservative’ tech pick of Apple.

The stock market could suffer a 10% correction as early as December if the Federal Reserve starts cracking down on inflation, a respected author and professor of finance says.

With inflation hitting a 30-year high of 6.2% in October, Jeremy Siegel expects the Fed will finally roll up its sleeves at its next meeting. That could mean the end of low interest rates and the beginning of market volatility.

Even so, Siegel believes the stock market remains the only reliable source of inflation-topping returns, and that “conservative tech stocks” should perform well.

Matt Maley managing director equity strategist Miller Tabak said on Tuesday, "I just wonder if people are saying, if the Fed is going to tighten faster than they're saying, 'should I be looking at something else.'" " 'I need something else besides Treasuries and what better than Apple computer?' "

Heading into the end-of-the-year holiday, Maley believes Apple could benefit from consumers looking to buy products in case they go up in price next year.

"If you want a flight to safety which also gives you a little exposure to strong consumer spending into the holiday, Apple computer is a good play," he added.

Apple benefits from customer loyalty that can border on obsession. That’s great news for inflation-era investors.

Apple’s customers have never balked at paying high prices for premium phones, laptops or watches, and their insatiable appetite for the company’s devices has made it the world’s biggest tech company in terms of revenue.

A mountain of capital and a willingness to innovate should allow Apple to keep evolving and providing long-term value. The company’s plans to reimagine the iPad and get into the electric vehicle market could open significant new revenue streams.

Needham analyst Laura Martin said that investors turned to Apple on Tuesday because the company has prodigious cash flow, allowing it to endure any slowdowns in the economy and take advantage of falling prices.

“There’s a flight to quality with companies that you know will weather the storm, not go bankrupt, not have financial distress,” Martin said, noting that other large-cap tech stocks aren’t down as much as smaller firms.

Martin added, Apple is positioned to introduce new products to power new growth, including a headset.

“The biggest criticism of Apple for the last five years is no new products. When you look at the product pipeline, lots of excitement there, especially in the press today about how they’re going to introduce augmented reality glasses at the next WWDC in June,” Martin said.

Martin said there are indications that Apple’s current products, especially its iPhone Pro models, are selling well, potentially leading to a big December quarter for the company. Apple said in October it expected record revenue in its fiscal first quarter, over last year’s $111.4 billion in sales, despite supply constraints.

“Lots of really good numbers coming out of retail about how the products are selling. Tablets, especially the high-end iPhones, all of which says they’re going to have high margins and high revenue for the fourth quarter of this year,” Martin said.

Apple uses its cash flow not only to invest in new products but to return capital to shareholders through dividends and buybacks, the latter of which can help keep the stock price stable. And Bernstein analyst Toni Sacconaghi said in a note to investors earlier this month that he expects Apple to continue repurchasing shares over the next five years.

“Our analysis suggests that Apple is likely to be able to continue repurchasing ~ 3-4% of its shares per year until the end of 2026 while growing its dividend per share by 10% annually without taking on net debt on its balance sheet,” Sacconaghi said in a Nov. 17 note to investors. 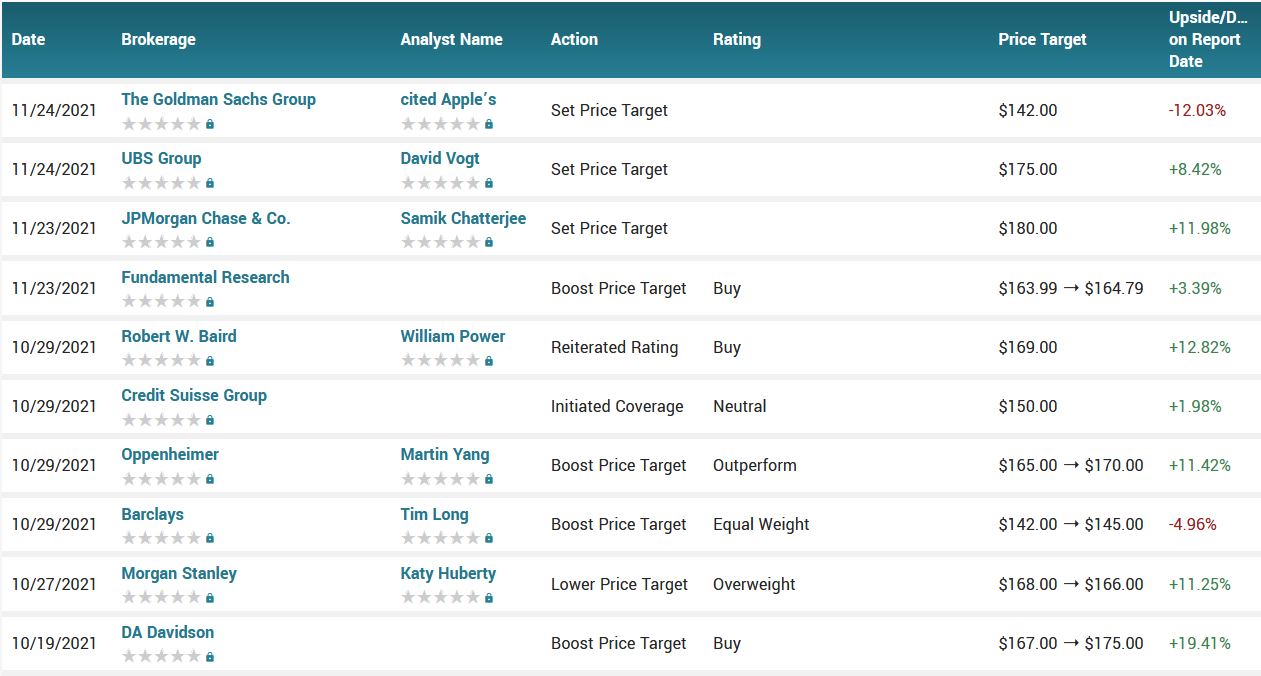 When markets get choppy, it's always useful to look at the stocks that are holding up the best.  Apple has done well in good times and bad, and that makes it an interesting candidate for investors looking for security and growth potential in their stocks.

The Apple Inc. Weekly Options Trade Has Been A Big Winner!

What Further TApple Inc. Weekly Trades Will We Recommend?

Back to Weekly Options USA Home Page from Apple Inc.