A longer expiry has been chosen to help offset the volatility being experienced in the stock market – exit where profit can be found!

(Some members have asked for the following.....BASE THIS ON YOUR RISK TOLERANCE!

Place a pre-determined sell at Approx. 100% of BUY price. (or vary according to your strategy)

Include a protective stop loss of -60% of price entered.

(CAUTION: Check the direction of the stock movement before executing – enter at the best available price – as you will be aware this stock market of late is extremely volatile and very unpredictable!)

NOTE: Personally, due to the volatility the market is experiencing as well as the fact that I am hands-on, I do not use a protective stop loss, but do have a flexible pre-determined sell point – I am not pushing for 100% unless I feel that it has the legs to accomplish this!)

AGAIN – ADJUST TO YOUR OWN RISK TOLERANCE!

Elon Musk threatened Monday to terminate his $44 billion plan to buy Twitter Inc. (NYSE:TWTR), accusing management of failing to comply with his request for data on the number of users and fake accounts on the social media platform. Twitter stock dropped.

According to reports, Musk believes that Twitter was in a “clear material breach” of its obligations. In this case, Musk can terminate the deal.

Elon Musk has previously put the deal on hold “pending details supporting calculation that spam/fake accounts do indeed represent less than 5% of users”.

As the recent reports indicate, Musk did not receive such details from Twitter, so the deal is in danger. Not surprisingly, traders rushed to sell Twitter stock at the opening.

The Other Major Catalysts for the TWTR Weekly Options Trade…..

Elon Musk formally and forcefully revived his assertion that Twitter Inc. has a serious bot problem, and threatened to walk away from his deal to buy the company if the social network doesn’t do more to prove its users are real people.

Last month, Musk said he was putting the deal “on hold” until the social media giant can prove bots make up fewer than 5% of its users, as the company has stated in public filings. Musk has estimated that fake accounts make up at least 20% of all users.

In a filing Monday, Musk sharply disagreed with Twitter’s assessment on bots.

“Twitter’s latest offer to simply provide additional details regarding the company’s own testing methodologies, whether through written materials or verbal explanations, is tantamount to refusing Mr. Musk’s data requests,” Musk’s lawyer wrote in a letter to Twitter’s top lawyer, Vijaya Gadde. “Twitter’s effort to characterize it otherwise is merely an attempt to obfuscate and confuse the issue. Mr. Musk has made it clear that he does not believe the company’s lax testing methodologies are adequate so he must conduct his own analysis. The data he has requested is necessary to do so.”

Musk believes the company’s resistance to provide more information is a “clear material breach of Twitter’s obligations under the merger agreement and Mr. Musk reserves all rights resulting therefrom, including his right not to consummate the transaction and his right to terminate the merger agreement.”

The near-term dynamics of Twitter stock depend on the market’s perception of the likelihood of the deal with Musk. Traders will ignore financial projections and focus on the fate of the deal.

The key question is whether Elon Musk still wants to buy Twitter and is using the fake/spam accounts topic to get a better price. Another important factor is whether Twitter itself wants to be sold, as the company is not actively engaging with Musk.

Most likely, the stock will remain extremely volatile in the upcoming trading sessions. The probability of the deal has decreased in recent weeks.

Texas's Attorney General, Ken Paxton, has launched an investigation of Twitter over concerns of "potentially false" reports related to the number of bots and other fake accounts on the social network. In a press release Monday, Paxton claims inauthentic accounts may be helping to "inflate the value" of Twitter — thus he intends to pursue the investigation under the state's Deceptive Trade Practices Act, which protects against misleading advertisers, businesses and everyday users.

Paxton's office is pursuing the case just as Tesla CEO Elon Musk is seemingly attempting to scuttle his own bid to purchase Twitter. Musk has, for several weeks, been suggesting the platform's bot numbers may be far greater than its current leadership are reporting.

Twitter has been ordered to provide unredacted documents detailing the company's active user counts since 2017, the volume of "inauthentic" accounts over that period and the methods used to calculate the ratio of fake accounts. It also has to outline its advertising model, including the revenue it generates in Texas.

The proposed takeover includes a $1 billion breakup fee for each party, but Musk can’t just walk away by paying the charge. The merger agreement includes a specific performance provision that allows Twitter to force Musk to consummate the deal, according to the original filing. That could mean that, should the deal end up in court, Twitter might secure an order obligating Musk to complete the merger rather than winning monetary compensation for any violations of it.

Musk’s lawyer, Mike Ringler of Skadden, Arps, Slate, Meagher & Flom, said Twitter must cooperate by providing the data requested so that Musk can secure the debt financing necessary to consummate the deal.

That claim is also complicated by the fact that numerous financial institutions have handed Musk commitment letters for debt financing, said Quinn.

Twitter’s shares slumped 1.49% on Monday, suggesting increased skepticism that Musk will finalize his $54.20-a-share offer and further widening the gap between the market’s expectations and the billionaire’s price. The shares have barely -- and only briefly -- surpassed $50 since Musk sprung his buyout plan on April 14. The deal came together at breakneck speed in part because Musk waived the chance to look at Twitter’s finances beyond what was publicly available. 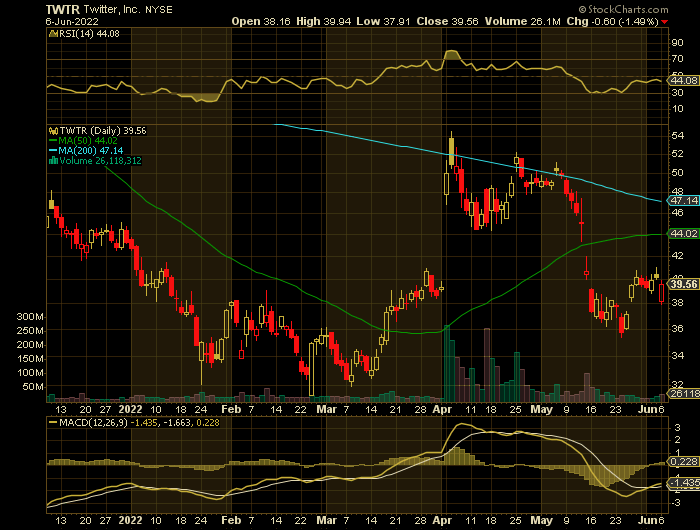 A longer expiry has been chosen to help offset the volatility being experienced in the stock market – exit where profit can be found!

(Some members have asked for the following.....BASE THIS ON YOUR RISK TOLERANCE!

Place a pre-determined sell at Approx. 100% of BUY price. (or vary according to your strategy)

Include a protective stop loss of -60% of price entered.

(CAUTION: Check the direction of the stock movement before executing – enter at the best available price – as you will be aware this stock market of late is extremely volatile and very unpredictable!)

NOTE: Personally, due to the volatility the market is experiencing as well as the fact that I am hands-on, I do not use a protective stop loss, but do have a flexible pre-determined sell point – I am not pushing for 100% unless I feel that it has the legs to accomplish this!)

AGAIN – ADJUST TO YOUR OWN RISK TOLERANCE!

The global energy sector climbed to new highs last week as crude oil and natural gas prices rose. It is a stunning reversal for a group that two years ago investors dared not touch with a 10-foot pole.

With the backdrop of banned Russian imports, rising global demand and tight supplies are pushing the price of oil higher again after it corrected from a 14-year high set in March. Natural gas prices are also climbing ahead of the summer air conditioning season. These trends bode well for the profitability of oil- and gas-related companies, many of which look poised for a second straight quarter of record results.

With no end in sight to elevated oil and gas, Wall Street analysts continue to raise their earnings estimates for North American oil producers, refiners, and pipeline operators. This has many investors riding the momentum in energy stocks despite their 50% year-to-date surge.

Based on forward-looking earnings estimates and sell-side price targets, there appears to be a lot more in the tank for Halliburton Company (NYSE: HAL), posting outsized gains this year.

In the past six months, HAL stock has increased 88%, including a 73% increase so far in 2022. At $41.95 a share, Halliburton’s share price is currently sitting at a 52-week high. However, it is still below the all-time high of nearly $70 per share that it reached in 2014, which was the last time prices for crude oil and natural gas were this high.

Looking ahead, Halliburton can be expected to continue its outperformance as oil and gas companies increase both their exploration activities and extraction from existing field sites. Currently, Halliburton’s stock dividend yields 1.16% for a quarterly payment of 12 cents per share.

As well, analysts are still calling it a buy. That’s because the oilfield equipment and services provider is expected to deliver similar performances to last quarter’s 24% revenue growth and 84% bottom line improvement.

The company is seeing strong demand from both the North American and overseas markets with oil explorers rushing to capitalize on the favorable pricing environment. Margins are on the rise as is Halliburton’s willingness to share the wealth. The board recently tripled its quarterly dividend payment and is likely to approve additional hikes given a payout ratio under 20%.

Halliburton Company provides products and services to the energy industry worldwide. It operates in two segments, Completion and Production, and Drilling and Evaluation.

This segment also provides cloud based digital services and artificial intelligence solutions on an open architecture for subsurface insights, integrated well construction, and reservoir and production management; testing and subsea services, such as acquisition and analysis of reservoir information and optimization solutions; and project management and integrated asset management services.

Halliburton Company was founded in 1919 and is based in Houston, Texas.

The Other Major Catalysts for the HAL Weekly Options Trade…..

The oilfield services company reported $0.35 earnings per share (EPS) for the quarter, hitting the consensus estimate of $0.35. The company had revenue of $4.28 billion for the quarter, compared to analysts’ expectations of $4.20 billion. Halliburton had a net margin of 9.61% and a return on equity of 17.83%.

The firm’s revenue for the quarter was up 24.1% compared to the same quarter last year. During the same period last year, the company earned $0.19 EPS.

As a group, analysts forecast that Halliburton will post 1.91 EPS for the current year.

The consensus earnings estimate for the full year implies 77% growth over the recovery year that was 2021.

The shares of Halliburton have almost doubled in value since the beginning of the year, pushed by surging benchmark oil & gas prices and the geopolitical uncertainty associated with the Russia-Ukraine war.

Before the pandemic, Halliburton’s revenues observed an average growth rate of 15% p.a. from $15.8 billion in 2016 to $22.4 billion in 2019 assisted by rising oil & gas demand and subsequently oil field services. The top line fell sharply to $14.4 billion in 2020 and remained almost flat in 2021. While net-margins have been skewed in recent years due to depreciation and impairment costs, the operating cash margins have ranged within 10-12%. Moreover, the company invests almost half of its operating cash in property, plant & equipment with a quarter in dividends and share repurchases.

HAL stock declined from levels of around $21 in February 2020 (pre-crisis peak) to levels of around $5 in March 2020 (as the markets bottomed out), implying HAL stock lost 76% from its approximate pre-crisis peak. With the rising transportation demand and macroeconomic uncertainty due to the Russia-Ukraine war, the stock has almost doubled from pre-crisis levels to $40 and we believe that it is likely to observe a correction as rig count numbers still stand lower. In comparison, the S&P 500 Index first fell 34% as Covid-19 cases accelerated outside China and is currently 30% higher than pre-pandemic levels. 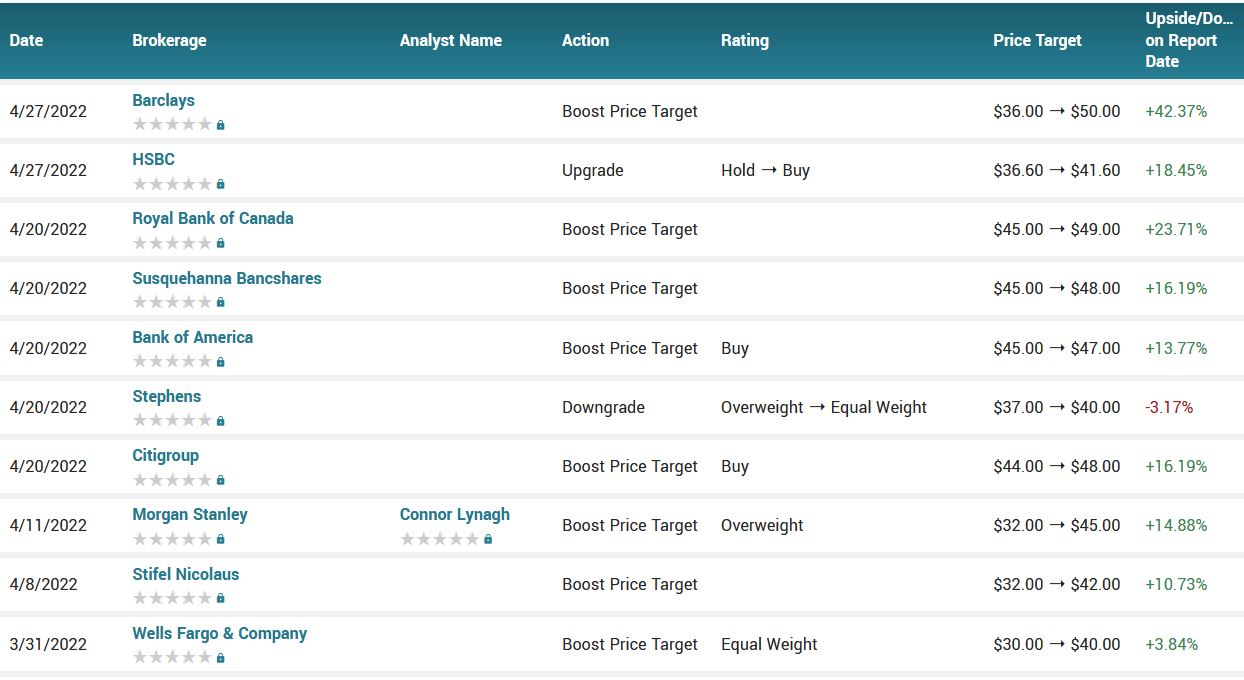 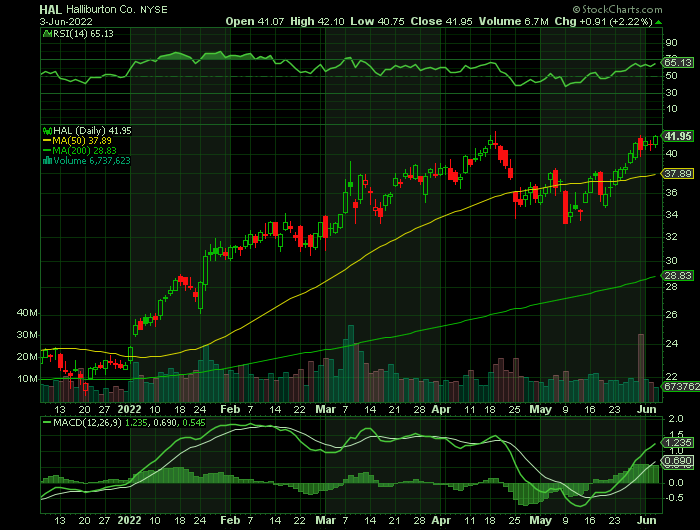