Watch the market carefully and keep your trade tight.

Shopify now serves more than a million businesses worldwide, and its decentralized self-service platform continues to attract merchants that don't want to be tethered to Amazon (NASDAQ:AMZN).

In the fourth quarter (reported on Feb. 17), Shopify's sales jumped 94% and the company's earnings popped 267%. That growth was sparked by rising subscription sales, up 53% year over year, and merchant solutions revenue, up 117% from the year-ago quarter.

People are spending more money than ever on Shopify's platform, as gross merchandise volume (GMV) exceeded $41 billion and reached $120 billion for 2020. That's up 96% from 2019.

Despite these impressive numbers, Shopify's stock is down about 5% over the past three months. The slide has occurred as some investors have exited the tech sector in search of other areas of growth, as the U.S. economy begins to open back up.

Online sales accounted for just 16% of all retail sales in the U.S. at the end of 2020, leaving substantial room for more growth in the coming years.

And with many people now accustomed to buying things online, particularly after this past year, it's likely that the e-commerce market will accelerate even faster than it was before COVID-19.

With Shopify's stock taking a slight hit over the past few months, it's a great time to buy shares of this fast-growing tech stock.

Shopify, Canada's most valuable company, is one of the few e-commerce companies Amazon just can't seem to beat. Unlike Amazon, which herds third-party merchants into a crowded marketplace filled with its own first-party goods, Shopify helps businesses build their own online presences with tools for creating e-commerce sites, launching marketing campaigns, processing payments, and fulfilling orders.

Amazon recently set up a whole committee just to deal with the “Shopify threat.”

According to Josh Rubin of the Toronto Star, Amazon set up the committee–known as “Project Santos”–to fight Shopify. Reporting by Marketplace Pulse goes on to say that the top-secret Amazon project aims to replicate parts of Shopify’s business model.

If that’s true, it should come as no surprise. Shopify has reportedly been taking business from Amazon, attracting many top vendors to its own platform. With much lower fees and more creative control, Shopify’s platform does offer vendors many advantages.

Recently, a number of top Amazon vendors have moved to Shopify. In most cases, they didn’t stop selling on Amazon in order to start Shopify stores. However, the fact that they’re now on Shopify means that Shopify’s share of their sales is increasing. Some top Amazon vendors getting on the Shopify train include            Bulletproof, Hasbro and Penguin Books.

Shopify’s cut of fees is much lower than Amazon’s, and Amazon has been increasing its cut while Shopify has kept its cut flat over the years.

Here is what Baron FinTech Fund has to say about Shopify Inc. in their Q4 2020 investor letter:

"During the quarter, we initiated a position in Shopify Inc., a provider of commerce and payment solutions for merchants of all sizes. Over one million merchants around the world use Shopify's software to run their businesses through E-commerce websites and apps, physical retail locations, social media storefronts, and marketplaces. The Shopify platform addresses many of the challenges of running a retail business, such as selling across multiple channels, managing inventory, processing orders and payments, fulfillment, shipping, and accessing capital. Shopify's solutions operate in the cloud, enabling faster product innovation and the ability to provide unique data insights to merchants about demand, pricing. and shipping optimization. The platform integrates with over 5,000 apps from third-party providers, creating two-sided network effects as the large number of merchants attract more partners and vice versa. About half of the company's revenue comes from FinTech solutions, including processing payments, lending, and business banking services.

We expect Shopify will be a prime beneficiary of the secular growth of Ecommerce. Gross merchandise volume on the Shopify platform was $100 billion over the last 12 months, which is large but still only 5% of global online sales and 0.5% of global commerce sales (online and offline) excluding China, implying a very long runway for growth. We expect Shopify's sales volume to grow faster than the e-commerce market due to an expanding set of capabilities, geographic expansion, and a singular focus on helping merchants succeed. We expect Shopify to better monetize the sales volume on its platform by increasing penetration of its payments, lending, business banking, and fulfillment services. Shopify's take rate and operating margin should meaning fully expand over time as the company provides additional solutions to its merchant customers."

A number of research analysts have recently issued reports on the stock.....

One investment analyst has rated the stock with a sell rating, fifteen have given a hold rating and fourteen have assigned a buy rating to the stock. The company has a consensus rating of “Hold” and an average target price of $1,282.23.

Admittedly, it's not likely that Shopify's stock will rise another 185% as it did in 2020, but it's likely that the tech stock will easily outpace the S&P 500's returns. That's because Shopify isn't finished tapping into the fast-growing e-commerce market.

Consider that at the end of 2020 online sales accounted for just 16% of all retail sales in the U.S. That still leaves a lot of room for Shopify to expand its platform as more businesses shift to online sales in the coming years.

In short, e-commerce is still in its early stages, Shopify is in a leading position, and the company's stock is currently down from its recent highs. 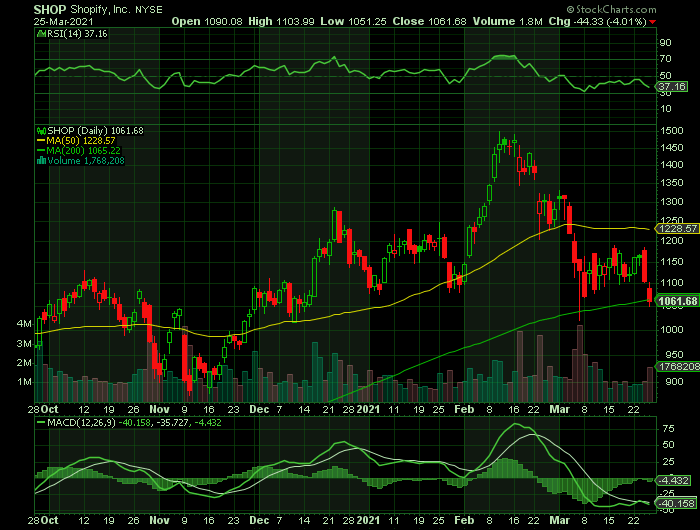 If you managed to profit yesterday as mentioned in the article “GrowGeneration – A Quick Profitable Trade!”, then you may wish to execute the following trade to take further advantage of the earnings due today, after the market closes. The catalysts have not changed at this stage.

AGAIN NOTE: Keep a close eye on the stock today – if there is sufficient profit it would be advisable to exit before the earnings report due to such a volatile market, and an unknown direction even if the report is excellent.

Include a protective stop loss of $1.50.

NOTE: Keep a close eye on the stock today – if there is sufficient profit it would be advisable to exit before the earnings report due to such a volatile market, and an unknown direction even if the report is excellent.

Over the last year, GrowGeneration Corp (NASDAQ: GRWG) stock has gained a whopping 1,787% and cannabis stocks, in general, received a big boost following the 2020 elections.

After Democrats took control of the White House and Congress, investor sentiment poured into cannabis stocks with the belief that decriminalization and even legalization in the U.S. could be a reality.

The company has also pulled its quarterly earnings per share into the green.

GrowGeneration Corp is the biggest hydroponic equipment supplier in the U.S., with 29 locations in 11 states, including California, Colorado, Michigan, Nevada, Washington, and, most recently, Arizona. The company is also actively targeting Illinois, Missouri, New Jersey, New York, and Pennsylvania.

The Denver-based company sells its more than 10,000 hydroponics products to individual home growers and large multi-state operators. GrowGeneration also sells its own private-label products, sold under the “Sunleaves” brand.

GRWG is expected to expand its private-label products and sell them through other retailers.

The company is backed by private-equity from the founders of Cronos Group Inc (NASDAQ:CRON), Gotham Green Partners, Navy Capital, and Merida Capital Partners.

GrowGeneration  will report earnings Wednesday, March 24, after the market closes. The consensus earnings estimate is for $0.06 per share on revenue of $60.89 million; but the Whisper number is a bit higher at $0.07 per share.

Consensus estimates are for year-over-year earnings growth of 700.00% with revenue increasing by 139.87%.

Short interest has decreased by 60.6% and overall earnings estimates have been revised higher since the company's last earnings release. The consensus EPS estimate for the quarter has been revised 11.11% higher over the last 30 days to the current level. This is essentially a reflection of how the covering analysts have collectively reassessed their initial estimates over this period.

Over the last four quarters, the company has beaten consensus EPS estimates just once.

Marijuana stocks have done well the past year as legalization spreads to more states and more people began growing cannabis at home during the Covid-19 pandemic.

GrowGen agreed to buy Santa Ana, Calif.-based 55 Hydroponics last Tuesday. The acquisition expands GrowGen's retail footprint in California to 18, with nine locations in the key Southern California market, and its overall U.S. locations to 51. Terms of the deal were not disclosed.

"As the dominant hydroponics retailer in Orange County, 55 Hydroponics boasts a devoted customer base, unmatched cultivation expertise, and a vast inventory of top-notch supplies, all of which will help GrowGen better serve Southern California's growers," GrowGen CEO Darren Lampert said in a news release.

The 55 Hydroponics acquisition was GrowGen's sixth this year.

Also, GrowGen announced that it acquired Char Coir, which produces popular hydroponic growing materials made from coconut fiber, to add more than $15 million to its sales this year.

As well, on Monday GrowGeneration said it bought a purchasing platform for commercial cannabis growers, marking its eighth acquisition this year.

The U.S. cannabis-focused retailer said Agron.io has technology that helps growers track inventory and manage operations. Additionally, Agron's platform also offers pricing and shipping data and a large product catalog. It sells a variety of industrial equipment, like lighting and hydroponic supplies via the catalog.

GrowGeneration expects Agron, which began operating in 2016 and is based in Denver, to add $20 million in sales this year.

Meanwhile, the expansion into purchasing technology reflects GrowGeneration's effort to become what it described as a "one-stop destination." It serves commercial customers, which include large U.S. multistate cannabis growers.

Seventy percent of GrowGeneration's revenue comes from multistate or bigger single-state operators, which often rely on such technology. GrowGeneration runs 52 stores that sell products like nutrients and soils. It doesn't sell cannabis directly.

GRWG stock and other marijuana stocks rallied after November's presidential election and two Senate runoff elections in Georgia that took place in January.

"As additional legal cannabis markets continue to open up across the country, we are expanding and enhancing our commercial services," CEO Darren Lampert said in a news statement. The changes range "from facility design and consulting to volume product pricing, to deliver best-in-class support for large growers." 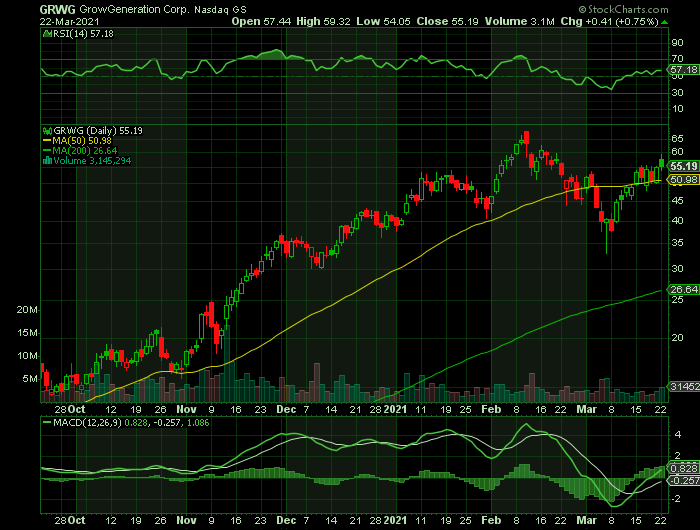