Include a protective stop loss of $1.60. 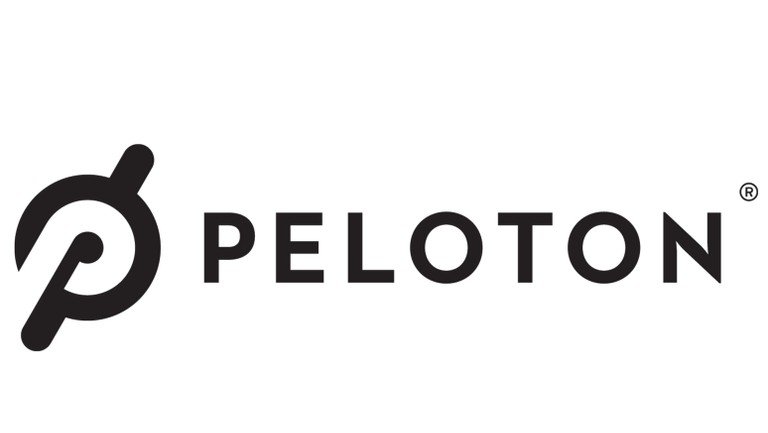 Peloton has been around since 2012, when it was launched with the help of a Kickstarter campaign. The fitness company is known for its high-end at-home gym equipment, including its exercise bikes, bike accessories and weights.

The company integrates web-based technology to its home workout programs to remain on the cutting edge of home gym systems. Peloton has a popular exercise app, and it produces workout videos that you can live-stream through the company’s products.

Peloton didn’t go public until September 2019, when it began trading at $19 per share. While the public offering had a slow start, PTON stock is now a big winner. Today, Peloton shares trade for more than $112.

The supply chain woes that have dogged Peloton during the COVID-19 pandemic are apparently easing, as negative customer comments on the Better Business Bureau's website are down "significantly."

Overwhelming demand for Peloton's connected treadmills and exercise bikes swamped the equipment maker as consumers began working out at home after gyms were forced to close during the coronavirus outbreak.

Yet the pandemic upset supply chains across many industries, and Peloton was unable to source enough equipment from its manufacturers in China. Last quarter it said congestion at ports had delayed shipments five times longer than usual.

Peloton subsequently expanded its manufacturing capabilities in the U.S. and also acquired Precor, a fitness equipment maker for the commercial market that would help it meet existing demand.

Kulkarni says consumer posts on the BBB.org website about the company are down substantially from when Peloton was telling customers shipment delays would be months instead of weeks. It suggests the improvements it's made to the supply chain are having a positive impact.

He is also hopeful about the national rollout of Peloton's new lower-cost treadmill called Tread, as well as the effect Precor will have on its chances of entering the market for equipment sold to hotels, gyms, and corporations.

Peloton announced its expansion into the Asia-Pacific region. Specifically, Peloton hopes to sell its fitness Bike, the pricier Bike+, and its interactive membership app in Australia by the second half of 2021, but did not say when other products would be available in the region.

As recently as last month, Peloton’s fiscal Q2 earnings report showed revenue growing at a staggering 127% year on year, while EPS was 80% higher than analysts expected. Sure, there’s an argument to be made that a price-to-earnings (P/E) ratio in the triple digits is hard to sustain, but we’re also talking about a company that has made the absolute most of the COVID pandemic and looks set to retain their position as a market leader.

The company said it planned to invest more than $100 million in air freight to help speed deliveries to customers. Its $420 million deal to acquire Precor, an exercise equipment manufacturer, is also expected to help along those lines.

Besides the bull note in the form of an upgrade from MKM Partners, where they raised the equity to "buy" from "neutral," noting that the recent selloff gives Peloton stock an "attractive" buying opportunity, the majority of analysts were already optimistic toward the security.

On Monday of this week, MKM Partners was the first to put their hand up and call the current bout of selling overdone.

MKM analyst Rohit Kulkarni expects the company to maintain their forward momentum even as more and more people receive the COVID vaccine and rotate out of a stay-at-home mindset. He pointed out that Peloton has a ton of potential in the longer term as they start to position their products with the likes of gyms and hotels. More immediate concerns about low inventory will hopefully soon be remedied by management’s investments in air and ocean freight supply chains.

This has been one of the main arguments from the bear camps in recent weeks, with supply delays almost guaranteed to hurt the company’s revenue and profit forecasts. But is it fair to say that after a 45% drop in the share price, this potential downside has already been baked in?

Kulkarni also had some interesting first-hand experience-based points to make, including the fact that his own Peloton Bike+ order was recently delivered ahead of schedule and that the company’s ratings on the Better Business Bureau have been steadily improving so far in March.

“Importantly, Precor has deep manufacturing in R&D expertise, which will help us bring new hardware products to market more quickly and better positioned us to serve our North American member base over time. Precor’s product portfolio and sales team will also accelerate our commercial business where we see a significant opportunity to grow Precor’s franchise while introducing the Peloton platform to an even greater number of fitness enthusiasts and channels such as hospitality, multi-unit residential buildings, corporate campuses, and colleges and universities.”

There are glimmers of hope as coronavirus cases continue to decline and vaccines are being rolled out around the world. But it’s going to be a long time for some people to be comfortable with going to a gym to sweat and breathe hard when they can get the same workout at home.

Peloton and other home fitness companies are taking advantage of the stay-at-home trend to grow their business. In hindsight, Peloton’s IPO couldn’t have been better timed.

Include a protective stop loss of $0.40.

Include a protective stop loss of $0.80.

NOTE: The market is likely to open higher today, therefore the buy price may be distorted.

Try to enter at the best price available.

So, there are 3 ways to play this – there are 2 recommendations above – you may wish to take the longer route in case of a disastrous earnings report. Or, you may decide to exit before the report if the profit is right.

The transition of Switchback Energy Acquisition (NYSE:SBE) has fulfilled its purpose as a special purpose acquisition company (SPAC) and now ChargePoint Holdings Inc (NYSE: CHPT) went public on March 1. So now, the company is trading on the New York Stock Exchange as CHPT stock.

CHPT stock used to be SBE stock. And since it was a SPAC stock, it stayed close to the $10 level for a number of months in 2020.

Switchback shot up by more than 250% in 2020. And ChargePoint distinguishes itself as one of the oldest and largest electric vehicle charing networks out there. It’s been in business more than 13 years, operates in 14 nations and has some amassed 4,000 business customers.

Once the public learned that Switchback was planning to merge with a company involved in the electric vehicle sector, the bulls really started charging ahead.

At this point, the bulls really need a catalyst to put the stock’s trajectory back in the right direction. The upcoming earnings event could be exactly what they’re hoping for.

ChargePoint will release its fiscal results for the fourth quarter of 2020, as well as the full fiscal year ending on Jan. 31, 2021, after market closes on March 11.

As far as the bottom line goes, ChargePoint is going to post a loss. But that’s fine, of course. The company is investing in its business, as it should. And modest moves in operating expenses or even gross margin can be due to short-term factors. Either way, those numbers won’t make or break the company’s long-term story.

Perhaps the most important aspect of the results for CHPT stock will be the company’s outlook for 2021 and potentially beyond.

One of the key distinctions of SPAC mergers versus traditional initial public offerings is that SPACs can make financial projections after a merger deal is made. Companies with IPOs generally cannot do that.

In its merger presentation, it modeled results through fiscal 2027. From $135 million in expected FY21 revenue, ChargePoint predicts that its top line will jump to more than $2 billion in FY27.

In September, ChargePoint projected $198 million of revenue for FY2022, with a gross margin of 31%. The company needs to reiterate those targets or come close to doing so. It may be that simple.

Oppenheimer analysts seem to view ChargePoint as a leader in its niche:

Oppenheimer has a $39 price target on the stock.

ChargePoint’s most well-known charging-station rival (among U.S. investors, at least) is Blink Charging (NASDAQ:BLNK). However,  ChargePoint is the more established company:

The industry is growing quickly and we can expect that niche leader ChargePoint will grow along with it. 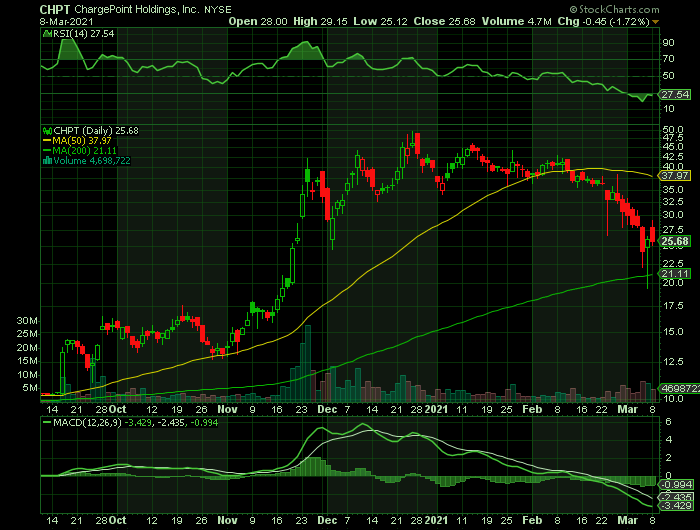