IMPORTANT NOTE: PRICE WILL CHANGE DUE TO PRE-MARKET BUYING.

Place a pre-determined sell at DOUBLE YOUR BUY PRICE – OR SELL WHEN YOU FEEL IT IS ENOUGH – THIS WILL BE A VERY VOLATILE SITUATION.

Include a protective stop loss of 40%.)

Ontario-based company BlackBerry Ltd (NYSE: BB), the once smartphone maker that has transformed into a security software specialist, is on a surge upwards in the past week.

The Canada-based cyber-security software company's stock has been on a tear over the past week, after The Global and Mail reported that the company, which made BlackBerry cellphones in a past life, had sold 90 patents to China-based technology giant Huawei, and after the company reportedly settled a patent infringement lawsuit against Facebook Inc. .

The stock, on track to close at the highest price since March 2018, has soared 73.3% amid a four-day win streak. That's would be the best four-day performance for the stock since it started trading in February 1999. The stock has now rocketed 153.7% over the past three months – and has increased dramatically in the past couple of days!

The first BlackBerry device, the 850, was introduced in 1999 as a two-way pager in Munich.

BlackBerry and its BBM system rose to popularity in the mid- to late-2000s.

In 2002, BlackBerry released the convergent smartphone for which it became famous and which some users dubbed "Crackberry" due to its seemingly addictive appeal.

The company was hurt by competition from the iPhone and Android.

Shares of the security software specialist are up roughly 10% premarket ( at the time of writing – but fluctuating dramatically) as an epic run and battle between investing (gambling?) forces continues.

2. Three deals with larger tech firms are boosting the stock.....

1) Huawei: BlackBerry sold some 30 mobile phone patents to the Chinese telecom giant. The prominent firm sells cellphones and is also a leader in 5G technology. Getting rid of its legacy business allows BlackBerry to focus on the future.

Chief Financial Officer Steve Rai speaking at J.P. Morgan’s 19th Annual Tech/Auto Forum Conference Call, said "there was a very small number of patents that are no longer relevant to the business."

2) Facebook: Huawei is not the only controversial firm BlackBerry is dealing with. Also with Mark Zuckerberg's social behemoth, BB is letting go of its past. The two firms have settled an ongoing dispute related to patent infringements. The burden of having BB's financial might was a weight on BlackBerry's shoulders.

Quoting a BlackBerry spokeswoman, the news agency reports that BlackBerry has "resolved our disputes pursuant to a confidential agreement and have no further comment." Facebook also declined to comment.

3) Amazon: Moving from one giant to another, the Canadian firm's future may lie with the retail behemoth. The two companies are collaborating around the IVY car platform, combining software abilities.

In December, BlackBerry signed a deal with Amazon.com (AMZN). The companies plan to develop and market a software platform that aims to let automakers read vehicle sensor data, improving the performance of cloud-connected vehicles.

"Management confirmed that it has a multiyear, exclusive partnership with AWS," he said in a report. "The revenue model includes ASP (average selling price) per vehicle and recurring revenue. The launch in vehicles is 2023-2024. While the offering is unique and appears value-add, it is difficult to estimate the revenue opportunity pending better visibility to specific design wins."

Wait for the stock price to drop back, if it occurs, then buy, run with the mob, but be prepared to get out quickly. 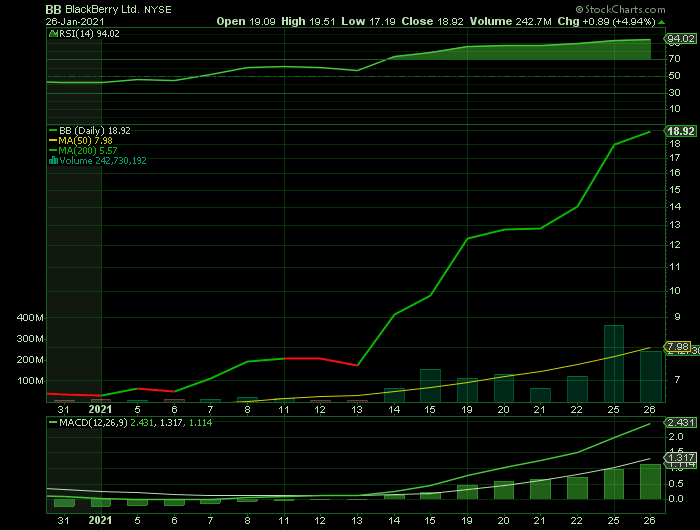 The Southern California electric vehicle maker got its start in 2016, and announced the completion of a SPAC merger with Spartan Energy on October 30, 2020.

Fisker Inc (NYSE: FSR) was founded by Henrik Fisker and his wife Geeta Gupta-Fisker; and is the relaunch of the Fisker brand previously known as Fisker Automotive (founded in 2007 by Henrik Fisker), which produced the Fisker Karma.

The stock has gained 64% in trading since then.

The quick gains for Fisker show both the growing popularity of electric vehicles in the market, and the particular strengths of Fisker’s approach. The company has a focus on solid-state battery technology, a developing alternative to the current lithium-ion batteries. Solid-state promises longer range, faster charging, and lower weight in EV battery backs. The company has numerous patents on solid-state battery tech, intended to lock in its niche for other industries, such as consumer electronics.

Fisker has also announced its all-electric Ocean SUV model. The vehicle will compete with Tesla’s Model Y, with similarly modern styling and lower starting price. The Ocean is slated to hit the markets in 2022.

Fisker, for one, has all the makings of a Tesla type EV maker: It’s got a new idea in the right lane and a legend behind the wheel in the form of Henrik Fisker. And it’s not just another EV SUV--it’s a vehicle made partly with recyclable parts, a fact bound to ring loudly with all that environmental and social impact money floating around out there dying for someplace to call home. And dying for the next success like Tesla.

2. A Biden election win and a global push hastened further by a crippling pandemic seal the deal on a $40-trillion energy transition of which transportation will be the Holy Grail.

Electric vehicle stocks have been performing well since Joe Biden’s presidential election win. Joe Biden’s focus on clean energy policy has been supporting EV stocks over the past two months. In addition, the global demand prospects are also strengthening as the majority of European countries plan to ban fossil fuel vehicle production in the next decade.

3. Louis Bacon’s hedge fund Moore Capital Management - has generated massive profits during the first year of trading after the macro hedge fund manager decided to step back from managing investors’ money in 2019 and consolidating its three funds into a single fund.

Fisker's first model, the zero-emission Ocean, is a five-person (with an available third row seat) midsize SUV, with a 2WD and 4WD option, a 250 to 350+ mile range, and recycled material interior. The SUV is also decked out with a large, curved screen and unique UI, 'California Mode' opening nine glass panels with one touch, and a PV solar roof to enhance efficiency. A production-intent prototype is slated for a summer 2021 unveiling.

The Ocean is entering the "large and rapidly expanding 'premium with volume' segment (meaning a premium automaker producing more than 100,000 units of a single model such as the BMW 3 Series or Tesla Model 3) of the electric SUV market."

The manufacturing combination with Magna allows Fisker to scale production quickly through FF-PAD (Fisker Flexible Platform Adaptive Design), with an estimated time frame of 29 months to start of production, compared to 5 years for a typical OEM. Magna's exclusive production of the Ocean in Europe and recent developments within the manufacturing agreements deepen the collaboration and look to set both parties up for success.

Fisker and Magna are collaborating on the FM29 platform, bringing a larger battery and more occupant space to a wide frame vehicle, also providing the ultra-range capability, announced during the "definitive platform agreement and initial manufacturing agreement."

7. Fisker does not have revenues or net incomes - although its $1 billion nest egg in cash and equivalents and lack of debt help.

Fisker sits with a fully diluted valuation of $4.82 billion, with 324.5 million shares after exercise of all warrants, including the 19.5 million given to Magna. On estimated annual volume of 200,000 units in 2025, and an average selling price of $55,000 (slightly below Fisker's internal estimate of $59,000), revenues would be $11 billion; if Fisker doesn't reach that scale, but hits 150,000 units, revenues still could reach $8.25 billion, almost double current valuation.

Cowen analyst Jeff Osborne is optimistic about the future of the EV market, and Fisker’s place in it.

“[We] believe Fisker is well-positioned to win share in the changing auto space as the industry undergoes a paradigm shift away from ICE vehicles toward EVs. The auto industry continues to move toward an electrified future with an increasing number of government mandates ordering countries and auto producers alike to pivot toward an EV-centric future. Consequently, we believe Fisker's flagship Ocean vehicle - which is a premium EV with an affordable starting price of $37,499 - is well-positioned to take share in the large and growing EV market," the analyst opined.

In line with these comments, Osborne rates FSR an Outperform (i.e. Buy), and his $22 price target suggests the stock has ~45% upside potential

Leveraging the partnership with Magna (MGA) to accelerate production, combined with competitive pricing, a high standard of innovation and unit economic profile could make Fisker a buy.

Although Fisker is still pre-production, with the Ocean not hitting the market until Q4 2022 at the earliest, given current timelines of production, shares are inherently riskier than some of the more established EV startups; yet Fisker's current sub-$5 billion fully diluted valuation signals it trading at a deep discount to EV peers. 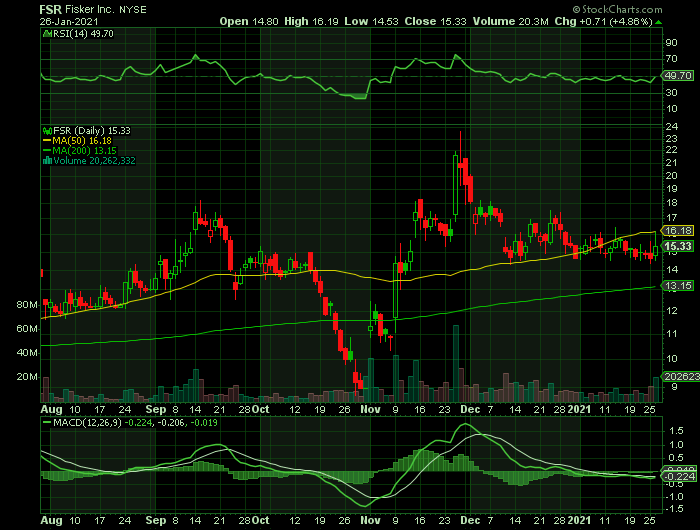