Julian Emanuel, chief equity and derivatives strategist at BTIG acknowledges several factors that could affect the direction of a stock after reporting.....

And one such stock that fits these categories is Lockheed Martin Corporation (NYSE: LMT), and could pop after earnings.

Lockheed Martin will report before the market opens for the fiscal Quarter ending Dec 2020.

The consensus EPS forecast for the quarter is $6.41. The reported EPS for the same quarter last year was $5.29.

Consensus Estimate for the company’s fourth-quarter revenues stands at $16.97 billion, indicating a 6.9% increase from the year-earlier quarter’s reported figure.

The Aeronautics segment has been a major growth catalyst for this defense contractor for decades. It primarily manufactures advanced, combat-proven jets and comprises almost 40% of the company’s top line. With Lockheed Martin having delivered a notable number of military jets in the fourth quarter, its soon-to-be-reported quarterly results might reflect impressive numbers for the Aeronautics business division.

During the quarter, the company delivered its 123rd F-35A conventional takeoff and landing (CTOL) variant aircraft to the Italian Air Force, a program that has been the primary contributor to the segment’s top line.

Lockheed Martin’s Missiles and Fire Control (MFC) segment, which provides critical missile defense support to the United States and its foreign allies, is expected to have delivered a strong operational performance.

During the quarter, Lockheed Martin and Aerojet Rocketdyne were together poised to deliver missile interceptors for The Missile Defense Agency (MDA). This is expected to have contributed to this unit’s growth in the fourth quarter of 2020.

Earnings estimates have been cut by 1.7% during the past three months, putting the stock in the bottom 50% of the S&P 500. It’s a low “bar to hurdle,” Emanuel says.

In December Lockheed announced plans to acquire Aerojet Rocketdyne Holdings Inc., a solid rocket motor maker, for $4.4 billion, but that was just the tip of the iceberg for the aerospace and defense giant. A raft of major procurement contract awards were also announced last month, adding to an already impressive year for Lockheed.

Lockheed won 32 procurement contracts in December, carrying a combined value of $4.8 billion, including $2.4 billion in upfront cash. A solid haul by any measure, 90% of the awards came from various branches of the U.S. military.

The lion's share of Lockheed's December contracts relate to the F-35 Lightning II next-generation fighter jet, including a massive $1.28 billion to support international logistics and training and a further $900 million to fund procurement of long-lead materials necessary to produce 133 aircraft. Smaller awards related to the F-35 included $102 million to support flight services in the United Kingdom and $97 million to support aircraft modification efforts.

Lockheed's jets were not the only winners in December. The company also won a number of lucrative military helicopter contacts. The largest of these, with a price tag of $507 million, consists of a modification of a prior deal inked in 2017 with the U.S. Army to produce 257 Black Hawk medium-lift helicopters.

The United Arab Emirates has signed an agreement with the United States to purchase 50 F-35 jets and up to 18 armed drones.

Designed to serve as the new centerpiece of U.S. and NATO warfighting strategy, a lot is riding on the F-35's success. Official estimates have projected an annual cost of $12.5 billion for the F-35, with the full program life-cycle cost expected to hit $1.1 trillion. That makes the F-35 Lockheed's most lucrative, and most important, contract.

Lockheed was awarded nearly $2.4 billion in December to advance elements of the F-35 program, including funds to procure a number of long-lead components needed to produce a Pentagon order of 133 jets.

The company has been investing heavily into its space segment, making multi-billion dollar deals to further dominate the hypersonic (missiles) market. With a FY 2020 budget of $2.6 billion and a FY 2021 request of $3.2 billion, the hypersonic budget is one of the faster-growing investments on the Pentagon's radar.

Lockheed landed a $4.93 billion deal from the Space and Missile Systems Center at Los Angeles Air Force Base in California for three next-generation geosynchronous Earth-orbiting space vehicles. In addition to building the vehicles, Lockheed will provide software and support services.

On Dec. 22, Credit Suisse reaffirmed its buy rating, upping it price target from $400 to $409. Goldman Sachs, having wavered slightly on its highly bullish call in September, has also come around, exuding confidence in the aerospace and defense company's prospects in a year-end update.

Five equities research analysts have rated the stock with a hold rating and twelve have assigned a buy rating to the stock. The stock presently has an average rating of "Buy" and a consensus price target of $445.00.

Of late, other countries in the Middle East, Europe and the Asia-Pacific regions have also expressed interest in this missile defense system. The requirement for THAAD has been soaring as the Army continues to integrate the system with the Patriot Air-and-Missile Defense system to build stronger missile defense architecture.

"Over the last several years, Lockheed Martin's backlog has substantially outgrown the rest of the industry, supporting the growth outlook for the foreseeable future. The company has exposure to Department of Defense priority buckets, and consistently executes well. Even if the end market growth rate slows, we expect continued strong fundamentals, with compounding earnings and cash flows." 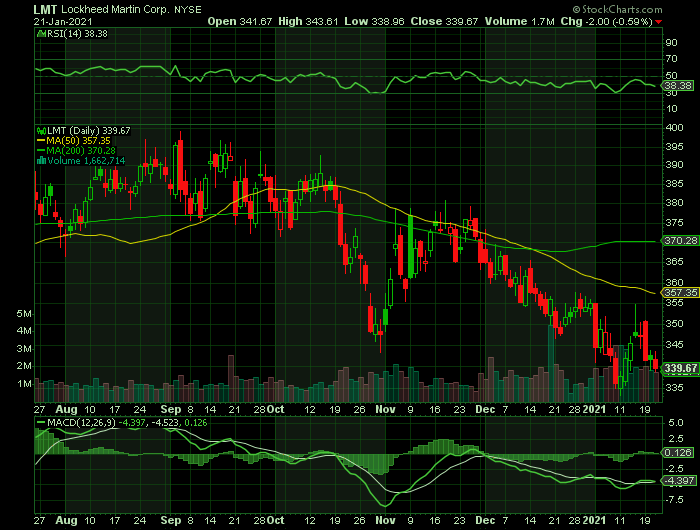 Include a protective stop loss of $N/A.) 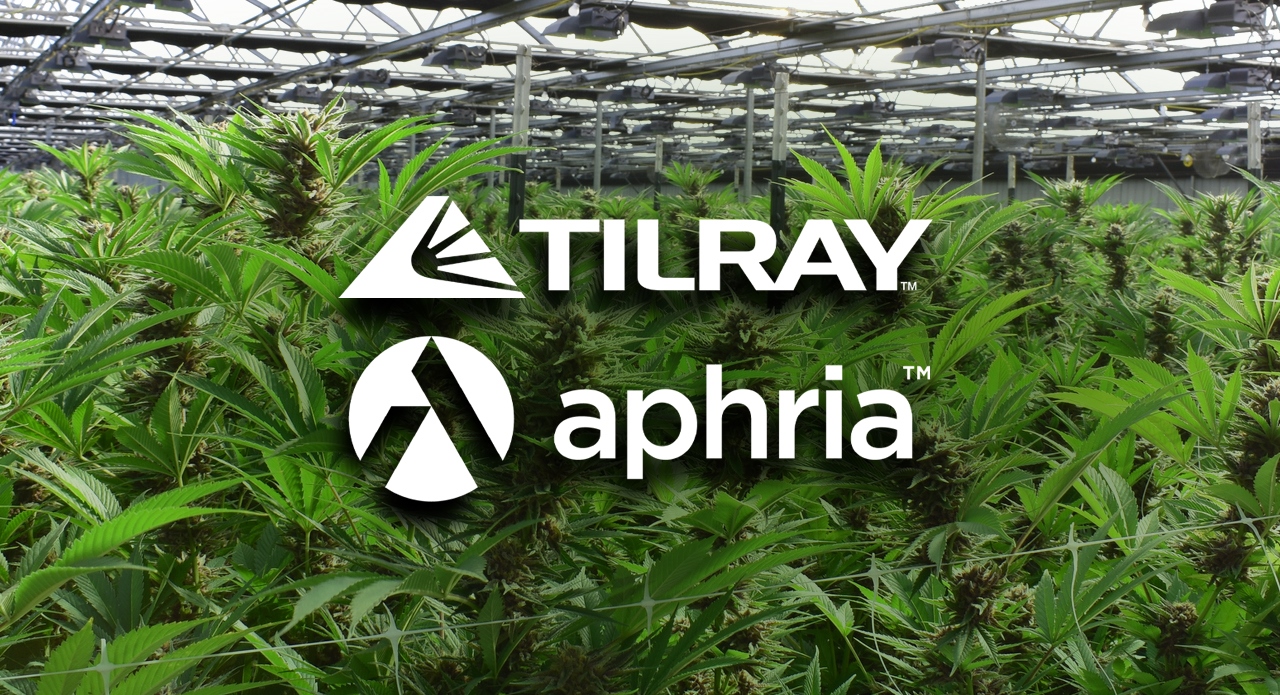 The company also highlighted its plans to finalize the merger with Tilray Inc (NASDAQ: TLRY) .
The deal — previously announced in December — is scheduled to close by the end of the second quarter of 2021, or by “late March to early April.”

Even though Cantor Fitzgerald analyst Pablo Zuanic expressed disappointment by Aphria’s quarterly results in an analyst note published last Friday, he raised the price target to CA$26.00 from CA$11.75 with an Overweight rating.

“Unlike the US MSOs, the Canadian LPs are not land-locked, and we would think they (the better-performing ones, with sturdier B/Ss and credible track records) will have first-mover advantage,” once recreational market overseas open, Zuanic noted.

The newly formed company will benefit from the development of international med markets and their eventual entrance into the US, he added.

Both companies, as one entity, can contribute to the fast-deregulatization of the cannabis world, he said.

Aphria has value since the combination of Aphria and Tilray trades at 13x.

Zuanic points out that 30 to 40x CY22 EBITDA “is not unreasonable” for the newly formed entity, taking into account “global opportunities and domestic aspirations.”

Aphria reported its financial results for the second quarter and six months ended November 30, 2020 . All amounts are expressed in Canadian dollars, unless otherwise noted and except for per gram, kilogram, kilogram equivalents, and per share amounts.

"We are pleased with our second quarter results which reflect the strength of our diversified global cannabis and consumer packaged goods businesses. Our market leading adult-use cannabis brands and sales remained strong and our international medical cannabis sales are off to a solid start. We also advanced our long-term vision for building a global cannabis life-style consumer packaged foods company positioned for sustainable, profitable growth with the completion of our acquisition of SweetWater late in the second quarter. In addition to advancing our long-term vision and growth objectives, the addition of SweetWater is a cornerstone within our U.S. strategy and a strong complement to our existing Aphria business that we believe will return compelling financial benefits. We already hit the ground running by starting to build upon the strengths of each of our respective complementary cannabis lifestyle brands broadening our consumer reach and enhancing loyalty with existing consumers."

Tilray is on fire once again and the stock is up 137% in 2021 YTD due to its international exposure and upside from progress on U.S. legalization. After the Democratic win in the Georgia Senate election, Canadian LPs rallied including Tilray but it appears that the shares remain significantly undervalued relative to Canopy and Cronos despite Aphria/Tilray being a stronger business. The recent rally is a positive development that partially closed the valuation gap with more room to go.

The momentum could last for a while in the near-term, and Tilray is likely to continue benefiting from positive news flow and investor interest in the cannabis sector.

After Aphria's second-quarter results beat expectations, causing the company's stock to soar, the Canadian pot giant is still keeping its focus sharply tuned to the U.S. market. While Aphria isn't able to directly compete in the U.S. pot market due to stock exchange restrictions, it does have brand access through its Sweetwater Brewing subsidiary and soon, hemp food maker Manitoba Harvest. But Aphria CEO Irwin Simon is steadfast that the company has to have a firm U.S. plan once the country legalizes cannabis. When that happens, "we will have either the ability to buy [or] merge with somebody. We all have the ability to greenfield if we have to do that, because we've got to be in the U.S.," Simon said.

The Aphria/Tilray combination will lead to the creation of a leading Canadian LP that has stronger business fundamentals than Canopy. The combined entity will have the largest market share in Canada, a leading presence in Germany and Europe, and reasonable adjacent businesses in hemp food, European pharma distribution, and U.S. craft brewery. These businesses are all profitable and related to cannabis, unlike some of the acquisitions made by other Canadian LPs.

Tilray shares hold substantial upside because it trades below Canopy and Cronos. Using a range of 35-40x EV/Sales which is at the low-end of Canopy's multiple, Tilray shares could be worth $25-$30 per share which implies another 30-60% upside just by closing the valuation gap with Canopy. 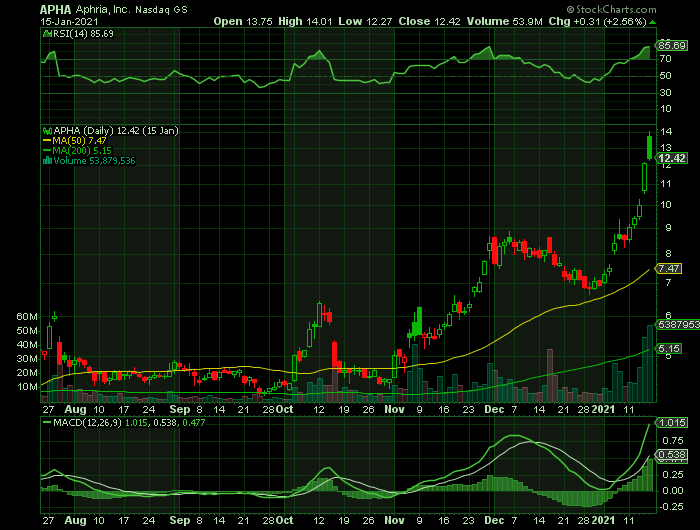 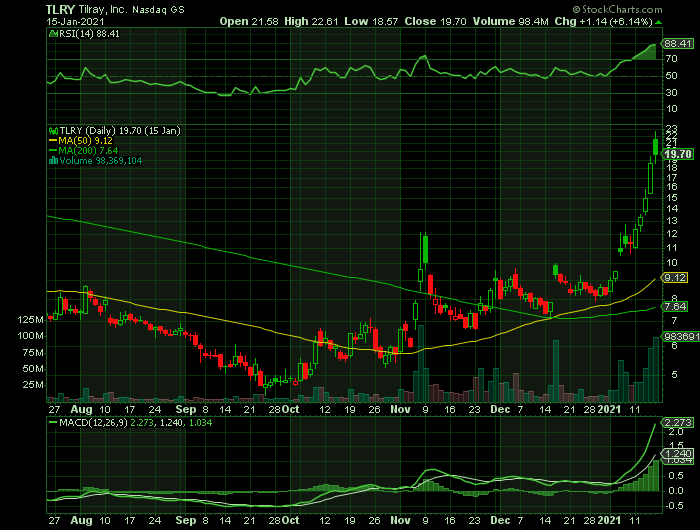