EV stocks were among the best-performing consumer stocks last year, and it appears that this theme is to continue in 2021. Many were up several hundreds of percentage points since the beginning of 2020 and the gains have only just begun – look for this continuation into 2021. It’s easy to see the potential in EV (electric vehicle) companies, with carbon emissions a major environmental concern worldwide and numerous financial incentives for electric car buyers.

With EV accounting for only 2.6% of global sales this is more than just a consumer trend we are talking about. In terms of technology and its impact on society, this is a secular change. Eventually, most cars and trucks will be EV and, to some extent, autonomous. What this means for investors is a multi-billion multi-decade growth opportunity.

Workhorse Group’s flagship line is the C-Series of last-mile delivery trucks. The company is manufacturing both the 650 and 1000 models, named for the carrying capacity, and expected to dominate the industry. Over the past year, the company has garnered approvals from all 50 states making it the only EV delivery vehicle licenses for operation nationwide. That’s important for any EV fleet with a nationwide presence.

The Major Catalyst for This Trade.....Delivery Van Order.....

Mississauga, Ontario, Pride Group Enterprises, a privately held commercial-vehicle wholesaler that operates in the U.S. and Canada, has placed an order for 6,320 of its new C-Series electric package-delivery vans, said Workhorse.

"This large order solidifies our first-mover advantage and indicates the heightened interest in our last mile delivery products," said CEO Duane Hughes in a statement. "Our new agreement with Pride marks our largest individual order to date and expand our sales channel internationally into Canada for the first time," said Hughes.

Workhorse's C-Series, designed with input from United Parcel Service (NYSE:UPS), is a short-range electric van designed for so-called "last-mile" service, such as deliveries to homes and businesses. The company received U.S. government approval to begin building the van last year.

It's a big order for Workhorse, which has told investors that it aims to build about 1,800 vehicles in 2021. Workhorse said that the deliveries to Pride Group "may begin by July 2021 and will run through 2026." Pride Group will distribute the vehicles to commercial-fleet customers through its dealer network.

Workhorse said that inventory financing — the cash to purchase parts and tooling to build the vehicles — will be provided by Hitachi Capital America (HCA), as per a previously announced partnership between Workhorse and HCA parent Hitachi (OTC: HTHIY).

"Our ongoing partnership with [Hitachi Capital America] continues to bear fruit as we gear up for scaled production in 2021."

Slowed by a COVID outbreak at its factory in Union City, Indiana, Cincinnati-based Workhorse expects to build 1,800 vans this year, gradually reaching production of 200 vans a month. It built just seven vans in the third quarter, two of which were delivered to Ryder System Inc. R 0.06% for use in its COOP short-term rental program.

Workhorse plans to begin fulfilling a pending order from United Parcel Service for 950 C-Series vans this year. It had a total backlog of about 1,100 vans at the end of the third quarter of 2020, not counting a 500-truck order from commercial vehicle distributor Pritchard Cos.

Workhorse may have a slight lead in building last-mile delivery vans over market startups Arrival and Rivian.

Workhorse stock has been trading for the past decade or so. But it did not get much attention until last year. Consider that WKHS stock has soared from $1.32 to a high of $30.99 in 2020.

Workhorse is the developer of electric vehicles for last-mile delivery. The company got its start back in 2007 and was called AMP Electric Vehicles. At first, the focus was on developing EVs for two-seat roadsters. But the company would eventually pivot to create trucks and vans for commercial purposes.

A big part of this involved a merger with Workhorse Custom Chassis, which was founded in 1998. The company was the developer of General Motors’ (NYSE:GM) chasses. As a result, the merger allowed for the new entity — Workhorse — to become a full-blown manufacturer.

For months now the story surrounding Workhorse has been the imminent contract announcement from the US Postal Service to replace its fleet of aged vehicles. While this is certainly still on investors’ minds, it is promising to see that Workhorse has secured contracts on its own, proving that the company is able to support itself without having to rely on the USPS contract as previously believed. 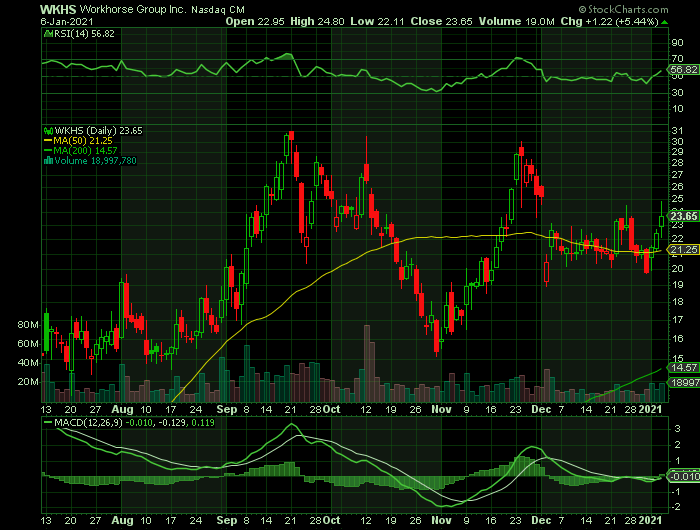 The beer and spirits specialist, Constellation Brands, Inc. Class A (NYSE: STZ), could grow more than 12% year-on-year to $2.26 billion.

“We believe the focus of Constellation Brands’ FQ3 EPS will be on accelerating and above consensus beer depletions to +8.3% y-o-y in FQ3 (vs. 5% in F1H21) with improving beer out-of-stocks, as well as a beer shipment recovery after the under-shipment in F1H21. We also expect an update on beer depletion trends in December, with solid U.S. scanner data trends but likely weakening on-premise trends with more on-premise restrictions, particularly in California (about a quarter of Constellation Brands’ volumes),” said Dara Mohsenian, equity analyst at Morgan Stanley.

Constellation Brands will report earnings at approximately 7:30 AM ET on Thursday, January 07, 2021, and Wall Street expects a year-over-year increase in earnings on higher revenues for the quarter ended November 2020. The consensus earnings estimate is for $2.39 per share on revenue of $2.22 billion; but the Whisper number is a bit higher at $2.45 per share.

Consensus estimates are for year-over-year earnings growth of 11.68% with revenue increasing by 1.76% in the past seven days.

The consensus mark for revenues is pegged at $2,257 million, suggesting a 12.9% increase from the prior-year quarter’s reported figure.

For the last reported quarter, it was expected that Constellation Brands would post earnings of $2.51 per share when it actually produced earnings of $2.76, delivering a surprise of +9.96%. Its bottom line beat estimates by 16.7%, on average, over the trailing four quarters.

Short interest has decreased by 37.7% and overall earnings estimates have been revised higher since the company's last earnings release.

Constellation last reported a 5% uptick in its overall beer business, which kept it ahead of larger rivals such as Anheuser-Busch InBev but behind Boston Beer.

The company's recent entry into the hard seltzer segment aims to close that growth gap with Boston Beer, the owner of the blockbuster Truly franchise. We'll get updates on how well Constellation's Corona Hard Seltzer fared in its third quarter of availability.

Two of the biggest reasons to like this stock involve such as investments in recreational marijuana products and Constellation's massive investment in its brewery network.

Constellation Brands, Inc, together with its subsidiaries, produces, imports, and markets beer, wine, and spirits in the United States, Canada, Mexico, New Zealand, and Italy. The company sells wine across various categories, including table wine, sparkling wine, and dessert wine.

Constellation Brands said last week that the U.S. Federal Trade Commission approved the sale of the company’s lower-price wine and spirits portfolio to E. & J. Gallo Winery. The deal is slated to close the week of January 4, 2021.

Despite the impacts of the coronavirus outbreak, Constellation Brands has been gaining from robust depletions and strength in the off-premise channel. The depletion volume for the beer business has been benefiting from strength in the Modelo and Corona Brand Families. Also, depletion gains from robust off-premise channel sales have been offsetting the declines in the on-premise channel due to the coronavirus outbreak. Continuation of these trends in the off-premise business is expected to have aided depletions and the top line in the fiscal third quarter.

As well, continued strength in the Modelo and Corona brand families and constant innovation have been driving portfolio depletions and market share gains.

The company’s wine & spirits premiumization strategy has been yielding results, as evident from the recent acceleration in depletions for the power brands, namely Kim Crawford, Meiomi and The Prisoner Brand Family.

In the last reported quarter, e-commerce for beverage alcohol has expanded significantly, increasing three to four times in volume from the prior year. Two-thirds of consumers plan to continue their e-commerce purchases even in the post-COVID situation.

The digital business has been gaining share through platforms like Instacart, Drizly and other retailer online sites as consumers look for the convenience offered by these channels, which should bolster the results for the to-be-reported quarter.

Fourteen analysts who offered stock ratings for Constellation Brands Sciences in the last three months forecast the average price in 12 months at $224.29 with a high forecast of $250.00 and a low forecast of $154.00. The average price target represents a 2.79% increase from the last price of $218.21. From those 14 equity analysts, ten rated “Buy”, three rated “Hold” and one rated “Sell.”

Morgan Stanley gave a base target price of $240 with a high of $280 under a bull scenario and $138 under the worst-case scenario. The firm currently has an “Overweight” rating on the beverage alcohol company’s stock.

Other equities research analysts have also recently issued research reports about the stock...... 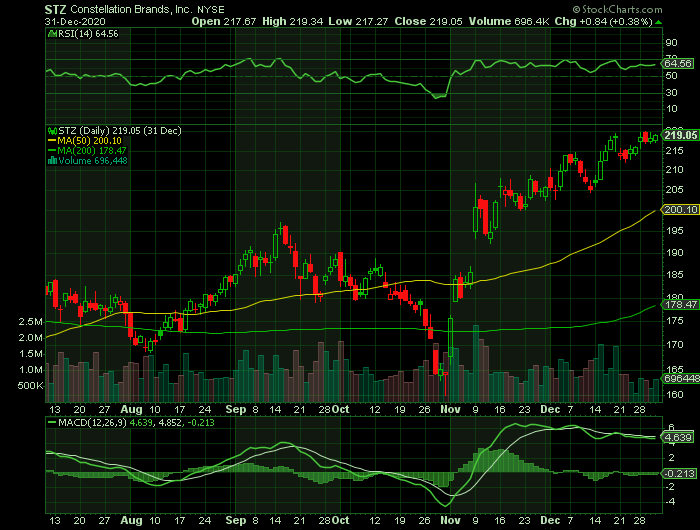